Thanks to Amy Cesal for her help designing the maps

When it comes to political fundraising, Congress doesn’t travel very far; 76 percent of all political fundraisers in D.C. take place within three city blocks of the U.S. Capitol, a new study by the Sunlight Foundation shows. Additionally, these fundraisers are concentrated in and around congressional working hours and on days when the House and Senate are in session (read more about this trend in Sunlight’s analysis of Five Years of Political Party Time).

What this map illustrates, in interactive color, is how deeply ingrained fundraising has become in the day-to-day life of Washington and in the routines of the people who work here.

A non-interactive version of the map is included below, which highlights the density of events within three blocks of the Capitol. 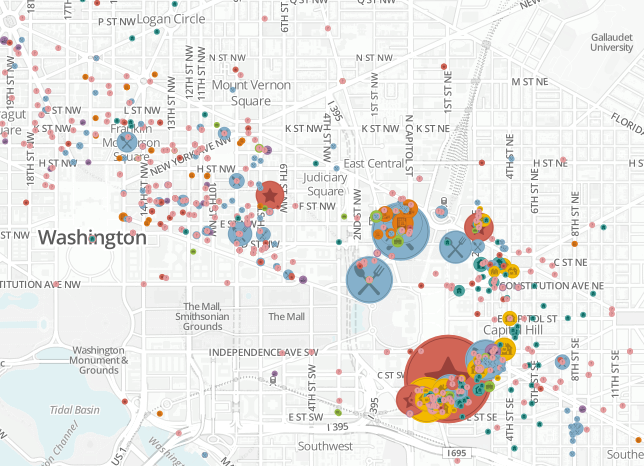 We created the maps above as part of our coverage for the five-year anniversary of Political Party Time . Most of our data (about 34 percent of party venues, accounting for 81 percent of all events) is for locations in Washington, (a map of the entire United States is discussed below).

On these maps, the size of each circle corresponds to the number of events at that venue. The 10 most common venues, listed in table 1, are all within the three-block radius of the Capitol, and together account for 44 percent of all D.C. parties.

What puts these venues at the top of the list for the most popular fundraising spots in D.C.? Location, location, location. Restaurants close to the Hill are frequented over and over by members of both parties (although some have distinct partisan tilts), and both Democrats and Republicans flock to party-run, members-only social clubs for fundraising events. In addition, 14 of the 50 largest venues are townhouses owned by a specific association, corporation or other special interest group and dedicated to fundraisers and other social events. A summary of the different venue types is shown in table 2. These figures are limited to the venues that we were able to determine a category for (see the Methods section below).

Here we see that corporate townhouses only make up 2.5 percent of all venues, but hold 15.2 percent of all events, meaning that, in general, a given townhouse has held many different parties over the last five years – an average of 58 events per townhouse. On the other extreme, there are more unique private residences than any other venue type (making up 27.1 percent of venues), but these homes are not as often revisited, and make up only 6.9 percent of all parties, averaging only 2.4 parties per home.

The “other” category includes the social clubs (the three listed clubs in table 1 – The Capitol Hill Club, the Democratic National Headquarters, and the National Republican Senatorial Committee – account for 59 percent of all events in this category) as well as country clubs, golf courses, concert venues, sports arenas and other scattered venues.

On the interactive map, hover your mouse over each venue to review more information, including ratings and reviews from Yelp.com, assessed property values for private residences, and a breakdown of events by political party. For more details you can download our bulk data (either for each event or aggregated by venue) or search the full dataset at PolitcalPartyTime.org.

We also mapped the fundraisers and events in our Party Time database across the United States, shown in the map below.

It should be noted that this sample is probably much less representative of reality than the D.C. sample. The Party Time data is mainly collected based on party invitations sent to the Sunlight Foundation by a handful of beneficiaries, lobbyists, reporters, anonymous sources and others. Most of these sources work, live, or operate within D.C. This means that outside of the District, our party data is spotty, and we cannot confidently draw too many specific conclusions from it.

That being said, the Party Time database includes events in every state of the union. The map shows us that most events occur in major U.S. cities (New York, Chicago, Los Angeles), recent convention cities (Charlotte, Denver, Tampa), as well as golf courses, homes, hotels and other venues in every U.S. state. Note that many convention city events were not political fundraisers in the same sense as most Party Time parties – rather, they were strategy and planning meetings or entertainment-focused events. But because many of these are sponsored by the same corporate or union interests that later will be lobbying lawmakers, we include them in the Party Time database. While this national data is sparse, we still see a concentration of parties in traditional fundraising states (“ATM” states) such as Florida, California, New York, and Illinois.

For every one invitation we have, hundreds of additional fundraisers may have taken place. With a little help from lobbyists, politicians and other members of the fundraising community across the U.S., we hope to keep growing the Party Time database, showing you where fundraising is happening both in our nation’s capital and across the country.

Like what you see? Make a donation to the Sunlight Foundation.

Venue data was built from the Sunlight Foundation’s bulk Political Party Time download, aggregated by venue name and address. Latitudes and longitudes were determined using the Mapquest geocoding service. While we believe this geocoding to be, in large part, accurate, location errors may exist in the data.

Venue category was first determined using keyword matching and entity searches through yelp.com’s api. Remaining venues with more than 4 events over the past five years were given hand coded categories.