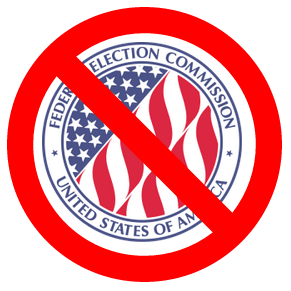 In shutting down the government, the nation’s lawmakers also guaranteed a little less surveillance on themselves.

Among the many agencies that will not be open for business as long as the political and budgetary stalemate continues is the Federal Election Commission, an agency created after the Watergate scandal. The idea was to reduce the possibilities of corruption in politics by making campaign donations more transparent.

For the foreseeable future at least, those donations will be taking place under a cloak of darkness.

Because the FEC’s electronic filing system won’t necessarily be available during the shutdown, the public will not be able to view the latest filings and filers will be free to ignore existing deadlines. Candidates will have until 24 hours after the government reopens to file campaign finance reports due during the shutdown. That could mean an extension for just about every candidate for federal office–there are two major filing deadlines fall this month. It also raises the possibility that some voters may not know the whole story about who’s trying to influence their vote until after they go to the polls.

Here are some key election dates in October and the reporting deadlines that the FEC had set before the shutdown:

In addition, Oct. 15 is the deadline for all political committees that file quarterly (a group that includes most House candidates) to have their paperwork into the FEC. Five days later, the reports of monthly filers (mostly political action committees, including super PACs) are due. Now, it’s anybody’s guess when voters will get a look at who’s been ponying up to the pols.