If the Supreme Court lifts limits on aggregate individual campaign contributions, as it may very likely do in McCutcheon v. Federal Election Commission, it will empower the limited number of donors who have the heart, the stomach and the bankrolls to contribute hundreds of thousands of their own money to determine who is in office. These truly elite donors are poised to be the big winners.

Our best guess is that parties and leadership committees will converge on these donors, giving roughly 1000 people a unique ability to set and limit the party agendas. Presumably, they will shift their money from super PACs to party committees because giving directly to party and leadership committees affords these donors more opportunities to talk directly to party leaders, and increases their bargaining power within the party structure. And party leaders want to control the money and the messages it buys.

This may lead to parties further tailoring their agendas to a very limited number of donors who are willing to pay a small fortune to get their favored party and candidates elected – assuming the parties and candidates comply with these donors’ politics. While some donors may continue to fund super PACs because of the independence it affords them, we expect that parties will prefer to be in control of the money, and so will do everything they can to appeal to these donors.

So who are the top 1,000 donors who will be in highest demand? Here are four observations about their behavior in 2012: 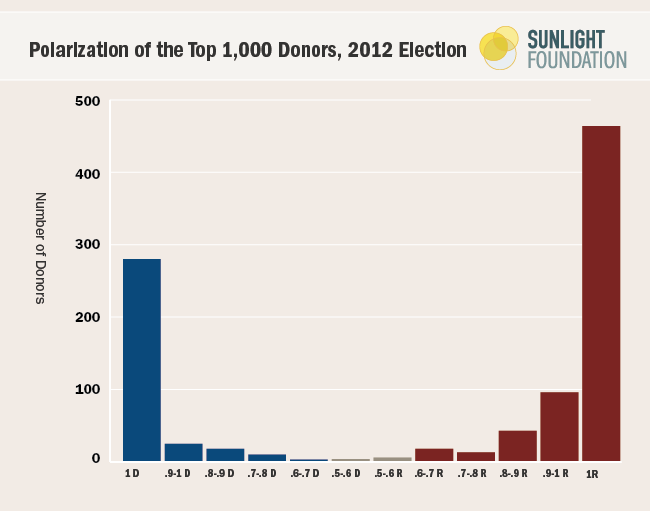 3. Top 1,000 donors gave primarily to super PACs, then to parties

The big question is whether these donors will continue to give to super PACs if the aggregate limits are removed. Again, our best guess is that money will shift to the party and leadership committees, which are sure to proliferate if aggregate caps are removed. Candidates and parties would prefer to control the money and the messaging it buys, and most donors would presumably prefer to get the maximum credit for their donations. Note that, on average, these top 1,000 donors actually exceeded the existing limits to political committees in 2012. (Presumably, they took advantage of loopholes that allow them to to exceed the limits.) 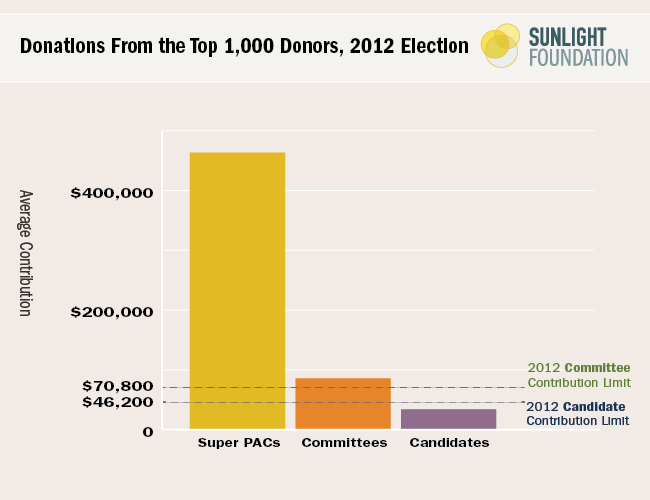 4. More than a third of Top 1,000 donors came from the financial sector

When we looked at the broader 1% of the 1%, we found that 21.5 percent of these donors were from the Finance/Insurance/Real Estate  (FIRE) sector. This financial sector dominance is even more pronounced in the top 1,000 donors: 34.5 percent come from the FIRE sector, far above any other sector. This means high finance would be especially poised to benefit from a lifting of aggregate individual campaign limits. 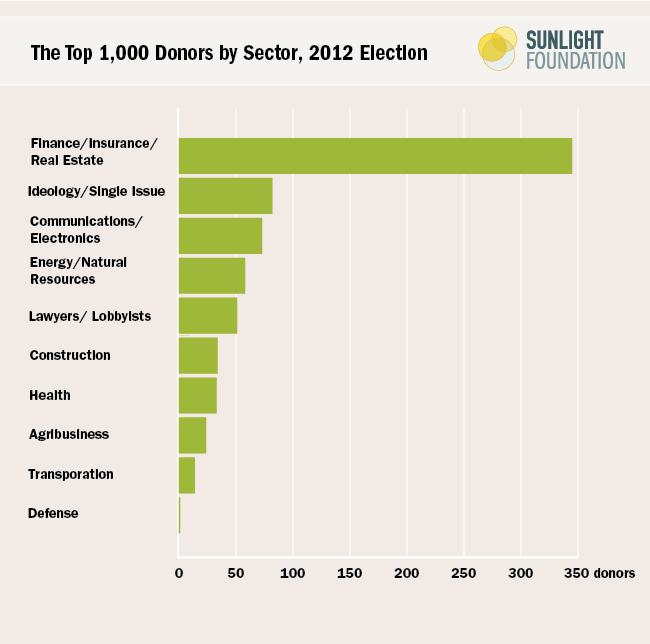 This portrait of the top 1,000 donors gives an insight into how lifting aggregate individual contribution caps could change the dynamics of campaigns. It suggests that Republicans would be more likely to benefit than Democrats, and that high finance would become even more central as a political gatekeeper.