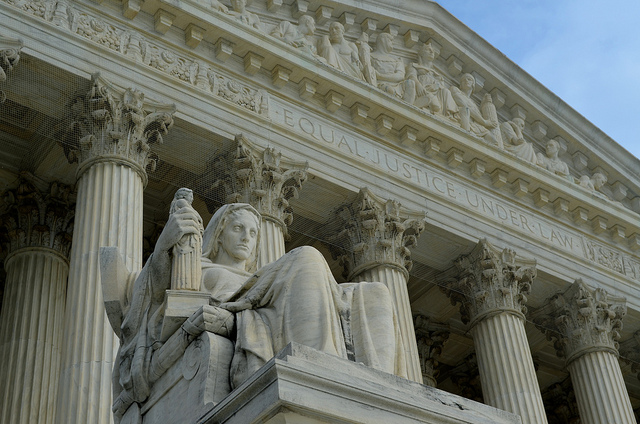 A major campaign finance case is up for oral argument before the U.S. Supreme Court tomorrow, McCutcheon v. Federal Election Commission. The Sunlight Foundation put together a resources tool kit on the issues around transparency and disclosure of political contributions and campaign finance in advance of the case. You can also keep up with Sunlight’s thoughts on it right here on our blog.

On October 8, the Supreme Court will hear oral arguments in McCutcheon v. FEC, a case in which the plaintiff, Shaun McCutcheon, joined by the Republican National Committee, is challenging the constitutionality of the overall limit on contributions to federal candidates and political parties.  Looking for a full case overview and court documents? Check out the SCOTUSblog.

The Citizens United ruling three years ago opened up the floodgates and now this one may give those who can give more power. If the court rules in favor of McCutcheon and the RNC, it might as well tie a big bow around Congress and deliver it to a tiny percentage very rich.

The plaintiffs in the McCutcheon case don’t view multi-million dollar solicitations and contributions from a single individual as a problem. Since money is speech, protected by the First Amendment, how can more money be a bad thing? What they miss, or choose to ignore, is that restrictions on money as speech can and have been long upheld as constitutional in order to prevent corruption or the appearance of corruption of our political process. They also fail to consider the First Amendment rights of the overwhelming majority of citizens, who cannot buy access to elected officials in order to give voice to their issues. Seven-figure contributions are not a megaphone merely amplifying the voices of the donors, they are a sonic boom, overpowering to the point of silencing all other voices.

Editorial Bill Allison addresses how the case could impact “checkbook lobbying.” He writes:

More than two decades ago, when Congress considered reforms that would put the brakes on hostile takeovers by corporate raiders, some of them used their checkbooks and their access to derail the effort without ever disclosing their lobbying efforts.  Back in 1989, federal election law limited the amount an individual could give to candidates, parties and political action committees to $25,000. That year Texas billionaire and corporate takeover artist Harold C. Simmons contributed $45,500. That year Simmons, a staunch Republican now best known for seven-figure contributions to groups like Swift Boat Vets for Truth and American Crossroads, gave plenty to GOP pols. But, unusual for him, he also wrote $1,000 checks to Democratic stalwarts like Sens. David Boren, D-Okla., Paul Simon, D-Ill., and Max Baucus, D-Mont., as well as a $15,000 check to the Democratic Senatorial Campaign Committee.

In June, Sunlight released an analysis called the “1% of the 1%,” which reviewed how the top sliver of the nation’s population gives to political campaigns. We found that in the 2012 election, 28 percent of all disclosed political contributions came from just 31,385 people (.01 percent of the U.S. population), and this money reached the campaign coffers of every winning congressional seat last year.

Read additional findings of how the 1% of the 1% applies to McCutcheon v. FEC by Lee Drutman, including a closer look at the top 1,000 biggest donors.

The sites all feature downloadable data.

In September, we examined how state legislatures are addressing the Citizens United v. FEC ruling, nearly four years later. Using our OpenStates.org site, which is a digital, searchable database for all 50 state legislatures plus D.C. and Puerto Rico, we analyzed bills that amended campaign finance laws and introduced in 2012 and 2013. We also noted whether the bill is pending or passed, and whether it would be better, worse or neutral for campaign finance disclosure efforts.

Read more about Sunlight’s position on the role of disclosure in money and politics here.

“Equal Justice Under Law” photo by dannymac15_1999 on Flickr.