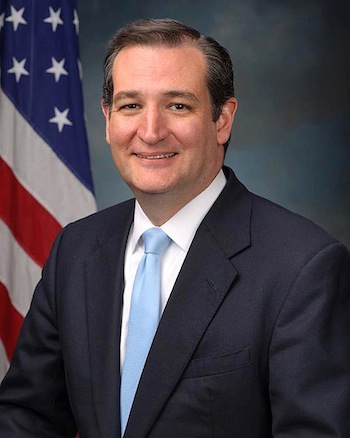 Ted Cruz’s (R-TX) mission to shutter the government in one fell swoop may be (temporarily) over, but that doesn’t mean he’s stopped trying to handcuff federal agencies in an effort to impose his own agenda on their work. His most recent effort involves preventing a Senate vote on the nomination of Tom Wheeler for FCC chairman because he wants to get Wheeler’s commitment that he will not use the FCC’s regulatory authority to require disclosure of the dark money behind political ads.

In a statement, Senator Cruz’s office announced, “Yes, the Senator is holding the nominee until he gets answers to his questions regarding Mr. Wheeler’s views on whether the FCC has the authority or intent to implement the requirements of the failed Congressional DISCLOSE Act. Mr. Wheeler had previously declined to give specific answers, but as he’s now expressed his readiness to revisit the Senator’s questions, the Senator hopes to communicate with him soon.”

Good luck to Mr. Wheeler during that conversation. Senator Cruz has demonstrated his hostility toward any effort aimed at uncovering the identity of dark money donors to political campaigns. Mr. Wheeler probably knows his appointment may be delayed, if not undone, should he answer that he believes the FCC does have the authority to demand broadcasters disclose information about who is paying for political ads.

And, for what it’s worth, the FCC does have the authority to demand disclosure of ad-buyers from broadcasters. In 2012, the FCC adopted rules requiring broadcasters in the top 50 media markets and affiliated with the four major networks to post political ad files online.  The files contain information that is often vital to uncovering the wealthy special interests that use fake social welfare organizations to engage in political activity. Last year, a court upheld the rules in a suit brought by the National Association of Broadcasters.

Now the FCC is considering expanding the rules to apply to more media markets, as well as to cable and satellite providers.  Sunlight is part of the Public Interest Public Airwaves Coalition, which submitted comments encouraging the FCC to expand the program so that vital information about who is funding our elections can be made public in time for the 2014 races.

Which brings us back to Ted Cruz and his hold on a previously fast-tracked nominee to head the FCC.  Cruz must fear what will be uncovered if donors to outside groups are disclosed, which is why he will use every procedural trick at his disposal to stymie legal and necessary efforts that are aimed at shining a light on dark money. But his efforts to undo what the FCC has begun should not be rewarded, and the FCC should continue the admirable progress it has made on providing voters with information about who is paying for campaign ads.