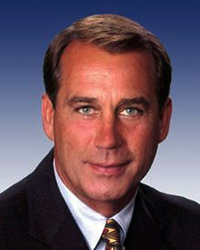 House Speaker John Boehner may have had a rough couple of weeks with a shutdown that's made him a lightning rod for public anger over gridlock in Washington, but the Ohio Republican is still one of the biggest political money magnets in town.

Preliminary returns of campaign finance reports filed this month with the Federal Election Commission and analyzed with Sunlight's new Real-Time FEC tracker show Boehner lapping the field in fundraising for the third quarter. Among the committees that raised the most money during the three-month period that ended Sept. 30, No. 1 and No. 2 are Boehner's: Even accounting for a $573,600 from Boehner for Speaker to Friends of John Boehner, the combined total is nearly $8 million.

Even so, it's noteworthy that the top five fundraisers among committees that have filed so far are all linked to key players in the shutdown drama. Joint fundraising committees tied to two potential rivals for the 2016 GOP presidential nomination, Sens. Marco Rubio of Florida and Ted Cruz of Texas, ranked No. 3 and No. 7 on the top money raising list. Former GOP vice presidential nominee, Rep. Paul Ryan, placed fifth. And even in the process of shutting down, President Barack Obama's formidable fundraising machine, Obama for America, placed No. 4 with nearly $1.4 million in receipts. The Obama committee made more than $311,000 by renting its valuable contributor lists to Organizing for Action, the dark money group that spun out of the president's campaign, and A.B. Data,  a firm that advertises itself as a partner to nonprofits and left-leaning causes.

Within hours of the FEC's midnight deadline for monthly filers (committees that report on a quarterly schedule filed Tuesday), Sunlight was able to  identify committees that raised the most money in the last quarter as well as those ending the quarter with the most money in the bank thanks to our Real-Time FEC tool, an addition to Influence Explorer that allows users to search and sort campaign filings for the 2014 cycle and to set up alerts that will notify them every time a committee files at the FEC. To determine the biggest fundraisers of the period, we set the filters to capture all committees that filed third quarter reports and set them to appear in order of amount of money raised. The image below shows how.

Ordering the committees by those with the most cash on hand produces a different list: The House candidate with the most money in the bank isn't a candidate at all: Former Rep. Marty Meehan, D-Mass., hasn't held public office since 2007, when he resigned his House seat to become chancellor of the University of Massachusetts at Lowell. Yet he's still sitting on more than $4.5 million in campaign cash.

For leadership PACs, we took a look at who is heading into the fourth quarter with the most cash on hand. Leader of the PAC (pun intended): Sen. Richard Shelby's Defend America PAC with $4.5 million. Shelby is the top-ranking Republican on the Senate Appropriations Committee and a former chairman of the Banking Committee, on which he still serves. Rubio's Reclaim America PAC also makes the list of committees with the biggest bankrolls as does that of another potential 2016 GOP presidential hopeful, Sen. Rand Paul, R-Ky., with RAND PAC. Also in the top 10: