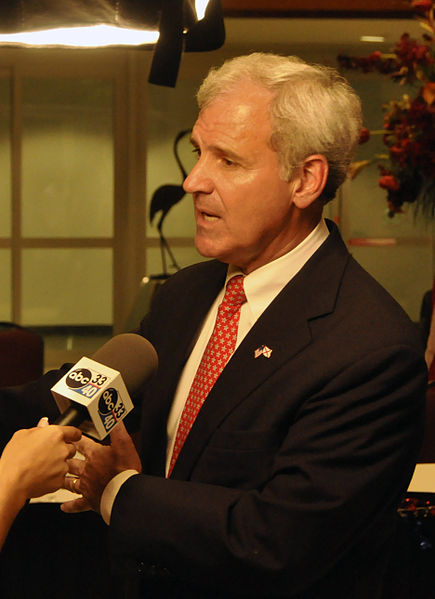 In the Alabama special election clash between Tea Party and establishment Republican candidates, the US Chamber of Commerce is putting its money where its mouth is. The business group — and political juggernaut — made waves when it announced it would support longtime state legislator Bradley Byrne over Tea Party-favorite Dean Young. The financial reports from the Byrne campaign show just how much the financial backing of major special interest groups like the U.S. Chamber can tilt the playing field in one candidate's favor.

Byrne and Young will face off in a Nov. 5 runoff to replace Rep. Jo Bonner, R-Ala., who left to take a high-ranking position at the University of Alabama.

In the final 20 days of a campaign, candidates have to report contributions of $1,000 or more within two days time, and Byrne has been dominating in that category. Recent filings compiled by Influence Explorer's Realtime Tracker show that Byrne raised $163,200 since Oct. 16–while Young has brought in just $5,600. Through today, Byrne's total disclosed fundraising haul came to about $928,000, while Young's stood at $266,000.

Besides the last minute checks rolling in, Byrne benefited from outside help as well. The U.S. Chamber of Commerce reported more than $185,000 in digital advertisements and direct mail in support of the veteran state legislator.

While Young only trailed by a few points in the first round of the special election, to date, the real estate developer has been out-fundraised by a margin of more than 3-to-1. Remove Young's loans to his own campaign and the ratio looks even more lopsided.

In the weeks leading up to the deciding vote, corporate and congressional PACs have flooded the Byrne campaign with checks. The leadership PAC of House Majority Leader Eric Cantor, R-Va., contributed the maximum amount allowed ($10,000),  while WAL PAC (Wal-Mart), ExxonMobil Pac and the American Medical Association were among the committees giving $5,000. Bonner, the outgoing incumbent, had his leadership PAC chip in $2,000.

The cash flowing into the Byrne campaign's war chest illustrates the split that exists between Tea Party conservatives and the Republican Party's traditional corporate donors. As of the start of 2013, the Chamber had spent more than $85 million in hard money contributions to candidates — the majority of which went to Republicans. Nine of the top ten biggest recipients of these contributions are Republican legistators from the state of Alabama.

Thus far, the only group to make outside expenditures on Young's behalf is the Sharron Angle-aligned OurVoice super PAC, which states a goal of "win[ning] a conservative (TEA Party) GOP majority in the United States Senate." The Nevada-based committee has spent around $55,000 on ads and mailings in support of the Tea Party candidate.

While Young has had to dip into his own private funds to stay competitive (he's loaned his campaign more than $170,000) he has managed to keep the race competitive. A recent poll commissioned by a Republican super PAC shows him trailing by seven points.