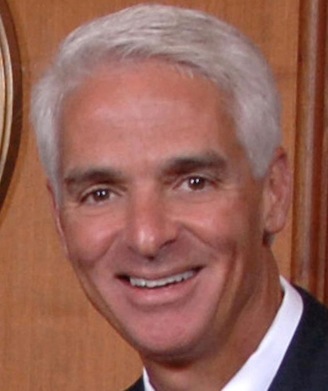 Charlie Crist has a knack with political donors. In between campaigns, he even got a job with one of his largest political benefactors. But as the formidable fundraiser — who raked in more than $33 million over the course of his political career — launches his challenge to Florida Republican Gov. Rick Scott this week, the question is whether he'll be able to manage an encore performance in a different role.

Elected Florida's 44th governor in 2006, Crist is running to reclaim his old job with a new resume: A one-time Republican who turned independent in 2010, he's now running as a Democrat. That could force a search for new funding streams by a politician who, in his last race, got more than $173,000 in bundled contributions via Al Cardenas, a lobbyist who chairs the American Conservative Union. Another one of Crist's major backers in the past: Huizenga Holdings, the company that operates businesses owned by H. Wayne Huizenga, former owner of three major league sports franchises in Florida: Major League Baseball's Marlins, the National Hockey League's Panthers and the National Football League's Miami Dolphins. Huizenga's firm has given mostly to Republicans, so whether they'll be willing to switch parties along with Crist is still an open question.

Crist's political metamorphosis began in 2010 when Washington's GOP establishment, led by Senate Republican Leader Mitch McConnell, R-Ky., and Sen. John Cornyn, R-Texas, persuaded Crist to run for an open Senate seat rather than seek reelection as governor. Unfortunately for Crist, it was the year of the Tea Party and the insurgent movement gave its blessing to an upstart former state legislator named Marco Rubio.

After switching his registration to independent to avoid losing a primary to Rubio, Crist fell to him in a three-way general election. Out of office, Crist went to work for the personal injury law firm Morgan and Morgan, whose employees gave some $98,000 to Crist's Senate campaign, records show. Crist even did some TV ads for the company and according to the company's website is still part of their law team.

Even so, Crist has proven himself a versatile fundraiser in the past. A quick look at some of the top contributors to each of his last two campaigns shows a funding pool with few overlaps. U.S. Sugar, one of the largest sugar manufacturers, is the only company that shows up in the top 10 list of contributors to both his 2010 Senate and 2006 gubernatorial campaigns.

Among his biggest donors for the governor's race were Sembler Co., a commercial real estate company whose employees gave $67,000 and State Farm Insurance and Daimler Chrysler. Money from Rothstein, Rosenfeldt & Adler was returned after the company's head, Scott Rothstein, pleaded guilty of embezzlement charges for orchestrating a Ponzi scheme of more than a $1 billion. The contribution will be removed from Sunlight's Influence Explorer.  For both the races the industries that have given the most include real estate companies, lawyers and healthcare professionals. Outside groups spent some $1.5 million against Crist in 2010; outside groups backing Crist spent $19,000.

Crist backed Sen. John McCain, R-Ariz in the 2008 presidential campaign against Barack Obama. But he supported President Obama in 2012, speaking at the Democratic National Convention in an appearance that foreshadowed his party switch. “I didn't leave the Republican Party; it left me,” he said.

Already, Floridians are seeing some anti-Crist ads hit the airwaves. In a preventive strike, Gov. Rick Scott made some ad buys against Crist, calling him out on his flip-flopping ways and portraying him as an opportunist.