After a summer of debate, the EU working group responsible for reviewing the joint lobbyist register of the European Commission and European Parliament is poised to make recommendations for the future of the register. Strong regulations can shed light on how lobbyists shape the policy making process in the EU. However, the register in its current form is “unsustainable, misguided and simply not credible” — according to a detailed report by the ALTER – EU, a coalition of about 200 civil society groups, trade unions, academics and public affairs firms concerned with the increasing influence exerted by corporate lobbyists on the political agenda in Europe.

The Sunlight Foundation applauds efforts to create more transparency around lobbying in the EU and encourages everyone to sign the petition launched by the ALTER-EU coalition. 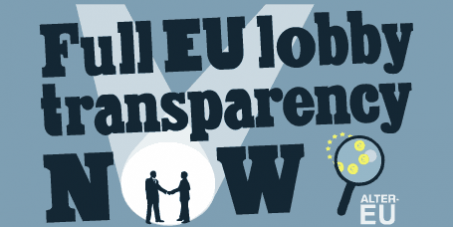 The most significant weakness in the EU disclosure system is that it is voluntary: lobbyists are encouraged to register, but are not mandated to do so by law. The voluntary nature of the register limits its reach and allows major players to remain hidden. Law firms that are active in lobbying in the EU, for example, have almost universally boycotted the registration process, crippling the public’s ability to understand the policymaking process. (Take a look at this map which shows some of the registered lobbying firms in Brussels. While the map provides a nice visualization, it probably represents only the very tip of the iceberg.)

The ALTER – EU report also highlights problems with the completeness and accuracy of the disclosed data in the EU transparency register. Unreliable reporting, including outdated information, incomplete client lists, and under- or over- reporting of lobby expenditures are common problems. According to the registry, for example, a small Portuguese printing company spends five times as much on lobbying as Google or BNP Paribas. Lobbyists often use abbreviations or acronyms when listing their employers or clients, making it impossible to identify on whose behalf they are lobbying. In many cases registrants simply refuse to provide meaningful data by giving vague and elusive answers, such as listing “various NGOs, government entities, local councils, SMEs, religious institutions” as their clients.

And the list of problems goes on. Some registrants report zero (!) individuals involved in their lobbying activities. (So who’s doing the actual lobbying?) Most registrants provide vague descriptions of lobbying activities, such as “all topics that matter to European companies” or “none”. (So why register at all?) Furthermore, the EU has no enforcement mechanism to investigate the accuracy of the information provided, and apart from removing lobbying entities from the registry, a questionable punishment for a voluntary system that is supposed to encourage disclosure, there are no real mechanisms to penalize those who fail to comply. 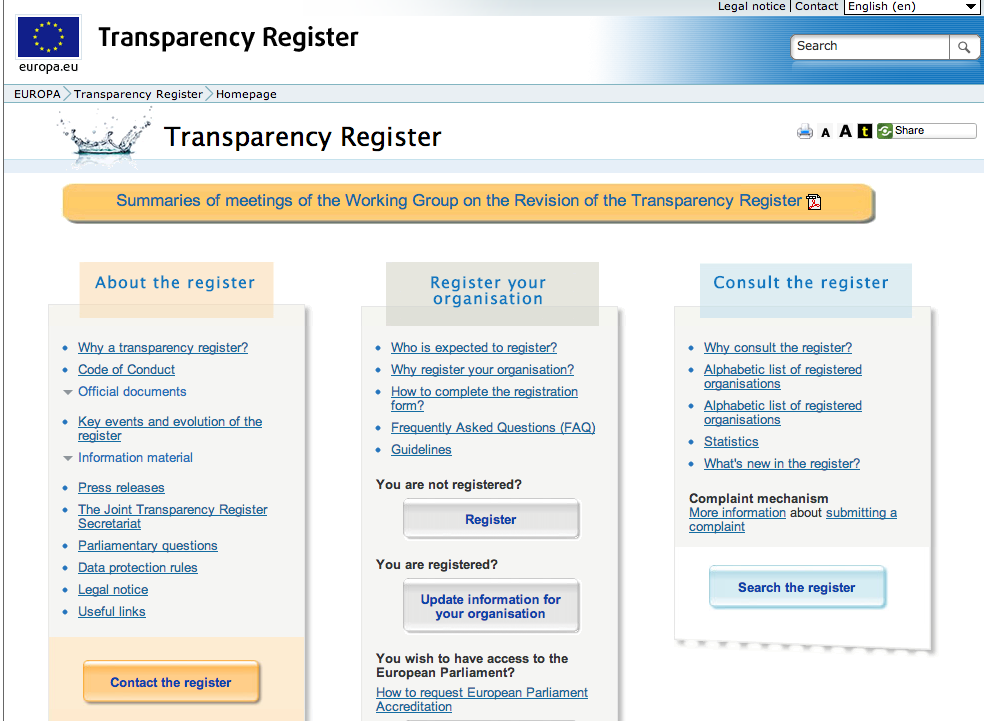 The need for better disclosure

In its current form, the EU lobbyist registry cannot fulfill its role as an oversight instrument, as it does not empower watchdogs and citizens to identify who is lobbying EU institutions on whose behalf and what issues. Unreliable reporting might give the public ‘false confidence’ that there is oversight of lobbying, and the lack of enforcement might even have some stronger downside effects, best demonstrated by Hungary`s lobbying law which was regarded as a “hypocritical beauty spot on the system”  and abandoned after a “failed 5-year of existence”.

The Sunlight Foundation strongly encourage everyone to sign the petition launched by the ALTER-EU coalition and demand better lobbying regulation in Brussels. Below you will find links detailing our recommendations on lobbying transparency in the US. We are creating more detailed guidelines that apply to other national contexts to help local activists and policy-makers improve their systems.