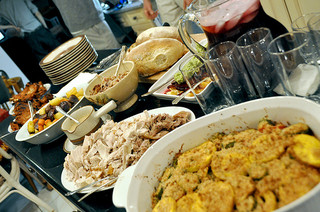 Thanksgiving is nearly upon us, with President Barack Obama scheduled to deliver the annual stay of execution for the National Thanksgiving Turkey on Wednesday. But on Capitol Hill, there's less goodwill: An end to the impasse on the farm bill is not in sight. Last year at this time we reported that Congress had let the massive bill that governs farm programs as well as food programs for the needy expired months before the holiday; this year is much the same, with little hope of the lawmakers — who are off on their own holiday recess — coming to agreement come December let alone by Thanksgiving Day.

Where there's controversy, there's political money, and agribusiness continues to pour campaign contributions into the coffers of the members of Congress who matter most:  So far this election cycle, top recipients of donations from agricultural services companies, according to Sunlight's Influence Explorer  were Rep. Frank Lucas, R-Okla, who happens to be chairman of the House Agriculture Committee, and Sen. Mitch McConnell, R-Ky. He serves on the Senate Agriculture Committee but, perhaps more to the point, he happens to be the Senate Republican leader. He's also facing a tough reelection fight next year that's likely to make him especially grateful for contributions.

Overall, agribusiness is careful to concentrate its contributions where it really counts: on the members of the agriculture committees who write the bill. We can see the result on our Thanksgiving plates:

Turkey. Since 1989, the National Turkey Federation and its employees have provided more than $1.3 million in campaign contributions, focused heavily on members of the House and Senate Agriculture Committees. The trade group has ponied up almost three times that amount for lobbying, Influence Explorer shows, and one of the federation's top issues has been the Preservation of Antibiotics for Medical Treatment Act, a bill that resurfaced this year under the sponsorship of Rep. Louise Slaughter, D-N.Y., who is a trained microbiologist. The bill aims to reduce the use of antibiotics in agriculture by requiring farmers to demonstrate that using them on animals would not cause harm to humans. Some studies have suggested that the use of antibiotics in livestock causes humans to develop immunity to drugs they might need later. But the National Turkey Federation has pooh-poohed reports that suggest use of antibiotics on can lead to meat carrying antibiotic-resistant bacteria.

Brussel Sprouts.  With outbreaks of deadly bacteria such as e. coli and lysteria infesting fresh fruit and vegetables from salad greens to cantaloupe, in early 2011, Obama signed a new law meant to strengthen food safety laws for produce. However, the Food and Drug Administration (FDA), lobbied heavily by the food industry, has been slow to implement the new law, getting so behind that it is now under a court ordered schedule to get the regulations written. This exemption crafted by the American Bakers Association for its members' warehouses exemplifies how well connected food industry groups manage to influence the regulations. Recently, small farmers have been organizing, complaining that the law unfairly disadvantages them and could affect farmers markets and Community Supported Agriculture programs. Meanwhlie, as we chow our leafy greens, the food safety system remains essentially the same as it was before the new law, the Food Safety Modernization Act (FSMA), was passed by Congress.

Stuffing. Both the House and Senate version of the farm bill move away from Depression-era direct subsidies for farmers and increase crop insurance programs instead; the Senate version sets increases of $5 billion over ten years while the House sets the amount at $8.9 billion, according to the Congressional Research Service. That means the farmers who grow the corn and wheat that goes into your favorite stuffing recipe would not get direct payments anymore. Rather, if their crops fail, they'd get insurance checks. A provision in the Senate bill reduces insurance subsidies for farmers with a gross adjusted income of more than $750,000; the Senate bill also includes more conservation requirements. Earlier this month, the Environmental Working Group reported that at least 50 billionaires or farm interests they had a stake in benefitted from more than $11 million in subsidies between 1995 and 2012. However, lest you think the days of subsidies are entirely over, consider that taxypayers heavily underwrite the cost of these insurance policies, paying some 60 percent of the premiums so that farmers are encouraged to participate. Meanwhile, private insurers profit from writing the policies. Farmers and insurance companies argue that the program is necessary to provide stability in the agricultural sector. Environmental and conservative groups both criticize the program as wasteful; the Environmental Working Group also decries the secrecy behind the program: The identities of recipients are not public.

Sugar. Year after year, a coalition of candy and beverage manufacturers, joined by an strange bedfellows group of consumer, environmental and conservative organizations, gathers together to try to reform the Depression-era sugar price support program. And year after year, they fail. This time around, the Senate 54-45 against an amendment to change the program, and the House amendment sponsored by candy-state Rep. Joe Pitts, R-Pa, also went down. While members of the coalition such as the American Beverage Association and Food Marketing Institute have formidable political clout, sugar producers, who have given more than $2 million so far this election cycle, nearly evenly split between the parties, have consistently managed to leverage their political giving with geographic alliances (sugar cane growers of Florida, meet the sugar beet farmers of Minnesota!) to maintain the program. Federally subsidized sugar loans are now increasing thanks to a glut of sugar on the world market, according to this recent Wall Street Journal report.

Food stamps. Last year we reported that following the financial meltdown of 2008, more Americans than ever before were getting help from the government putting food on their tables. This year, more parents are again relying on the government for help but the serviings are more meager. According to the most recent figures from the Congressional Budget Office, some 47 million people were signed up for Supplemental Nutrition Assistance Program (SNAP) in 2012, compared to 44.7 million in 2011. However, they are getting smaller helpings: as of Nov. 1, the temporary increase in the food benefits contained in the American Recovery and Reinvestment Act expired. This means cuts equivalent about 16 meals per month for a family of three–one mother and two children–according to calculations by the liberal think tank Center on Budget and Policy Priorities. Meanwhile, from the conservative side, there are predictions that Obamacare could increase the rolls of food assistance, because low income people signing up for health care will be directed toward various federal programs where they may qualify for help. This basic dissonance between left and right on the issue of food stamps has been a major continuing factor for the stall out of negotiations over the Farm Bill. In July, Heritage Action Fund, one of the leading opponents of the program, called defeat of an early version of the Farm Bill in the House last summer a "decisive victory." Then in September the Republican controlled House approved, separately from the rest of the farm bill, H.R. 3102, which would cut some $39 billion from the SNAP program over ten years. The Center on Budget and Policy Priorities points out that that amount is almost double the cuts contained in the House Agriculture Committee version of the Farm Bill and about ten times the amount in the Senate passed Farm Bill.