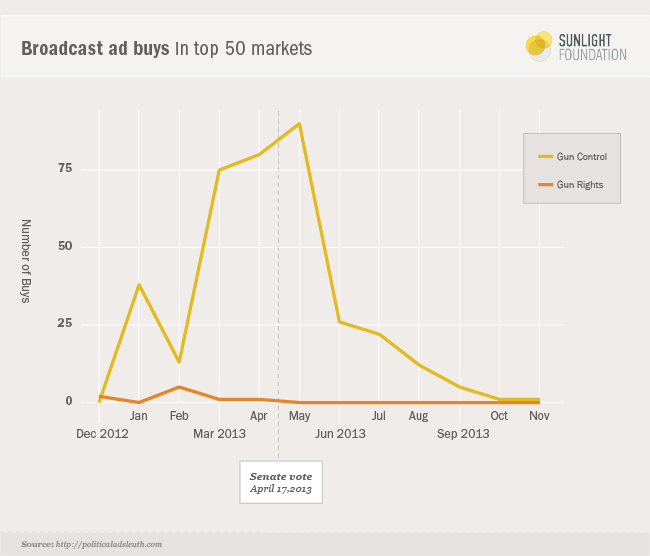 Graphic: Bob Lannon and Amy Cesal/Sunlight Foundation
Last December’s shooting massacre of 26 people in a Connecticut elementary school occurred six weeks after a national election and almost two years before most members of Congress would be facing voters. Nonetheless, groups on both sides of the gun argument still found plenty of ways to spend millions in 2013. All of the activity makes for a compelling case study on how “stealth” expenditures — the kind that are off the FEC’s radar screen — can affect politics and policy.

And it may be a sneak preview of coming attractions: As the calendar turns towards a congressional midterm year, major pro- and anti-gun control players are sitting on significant cash reserves, suggesting that 2014 will bring more of the traditional kind of spending — money given directly to candidates or spent to advocate for their election.

Here’s a look at the political landscape.

Outgoing New York City Mayor Michael Bloomberg, a Republican-turned-political independent who made a fortune on Wall Street before entering politics, emerged as the single most significant financial force for the long out-spent gun control movement. Bloomberg exercised his considerable effort in three ways:

Another powerful new voice in the gun control debate is former Rep. Gabrielle Giffords, an Arizona Democrat whose promising political career was derailed when a would-be assassin shot her in the head in 2011. After a miraculous recovery, Giffords formed Americans for Responsible Solutions, a pro-gun control super PAC, along with her husband, former astronaut Mark Kelly. The group gave $170,000 to support McAuliffe in the Virginia governor’s race. Political Ad Sleuth shows the group making media buys in the Colorado recall races, as well as buys earlier in the year in Washington, presumably to air this issue ad captured by Sunlight’s Ad Hawk. In the weeks leading up to the debate over stronger background checks for gun buyers, the same ad also reportedly ran in several cities that are home to members of the congressional leadership. But, unlike Bloomberg, Giffords did not engage in federal races this year. She’s well-prepared for next year, however. Sunlight’s Real-Time FEC tracker showed that as of June 30, Americans for Responsible Solutions had the second largest cash reserves among political action committees filing June 30, the most recent campaign finance report available for the group.

The Brady Campaign Against Gun Violence, which began in the 1970s as Handgun Control Inc., operates a small federal PAC, which reported just $2,300 cash on hand in its most recent FEC report. While the group created several advertisements after the Newtown shootings, including this recent one launched in November, it did not appear to place any ad buys in large national TV markets.

The Violence Policy Center and Sandy Hook Promise, both of which have a lobbying presence in Washington, do not operate PACs.

At the federal level, the National Rifle Association’s PAC has historically put big money into independent expenditures, but spent relatively little in 2013 according to Sunlight’s Real-Time FEC tracker. Indeed, it looks like it is saving its pennies for the 2014 elections: It reported $11.2 million cash on hand in its most recent FEC filing, up from $2.6 million in January. Overall, it has parted with $1.4 million. It spent more than $14,300 on independent expenditures to support Republican Neil Riser, a Louisiana state senator, who lost in a runoff special election for a Louisiana House seat in November. Most of its direct campaign contributions, totaling about $220,000, were in chunks of $1,000 or less, according to data collected on Influence Explorer.

However, the NRA also got involved in state races: In the Virginia gubernatorial race, it spent $478,000 trying to help Ken Cuccinelli, the pro-gun rights Republican whom McAuliffe defeated. And it was also active in Colorado, where it contributed nearly $400,000 to the local NRA issue committee supporting the successful recall efforts for two state senators.

Like many organizations, the National Association for Gun Rights, which describes itself as a “no compromise gun group,” has both a 501(c)4 and a PAC. The PAC has just $48,000 cash on hand, as of its most recent FEC report, and has spent less than $24,000 this year, according to the Real-Time FEC tracker. However, the group was quite active in running ads targeting federal lawmakers on federal gun legislation in their home states, such as this ad, captured by Ad Hawk, aimed at Sen. John McCain, R-Ariz., and this one blasting Sen. Pat Toomey, R-Pa. Ad Sleuth shows the group running ads in Arizona, Colorado, Pennsylvania and Virginia.

Other national gun rights groups did not appear to spend as much on campaigns and ads. The National Shooting Sports Foundation, the trade association representing the firearms industry, operates a relatively small federal PAC, reporting $197,000 cash on hand and disbursements of $44,000 in its most recent FEC report. However, in least one state that strengthened gun laws, Colorado, an individual gun company has stepped up its political profile. There, Magpul Industries, a firearms and accessories manufacturer, gave away 1,500 30-round Magpul magazines before the new state limit on magazines went into effect. The company also created a print ad riffing on the Berlin Airlift of the 1940s — though the “air drop” in this case was ammunition magazines, not food supplies.