If you are a regular reader of this blog, chances are you think that money buys access in Washington — and possibly a whole lot more. But do you have proof?

While this may seem like conventional wisdom to many, there is actually a remarkable dearth of scholarship that offers much by the way of good, hard empirical evidence.

That’s why there has been so much interest about a new paper written by two political science graduate students, Josh Kalla and David Broockman. They have some very hard-to-dispute evidence.

Kalla and Broockman ran an experiment. They had a political group send out emails to members of Congress asking for a meeting. Half of the members of Congress got an email from “local constituents.” The other half got an email from “local campaign donors.” The figure below tells the story of the results. Those who identified themselves as donors were about six times more likely to get a meeting with either the member or the chief of staff. 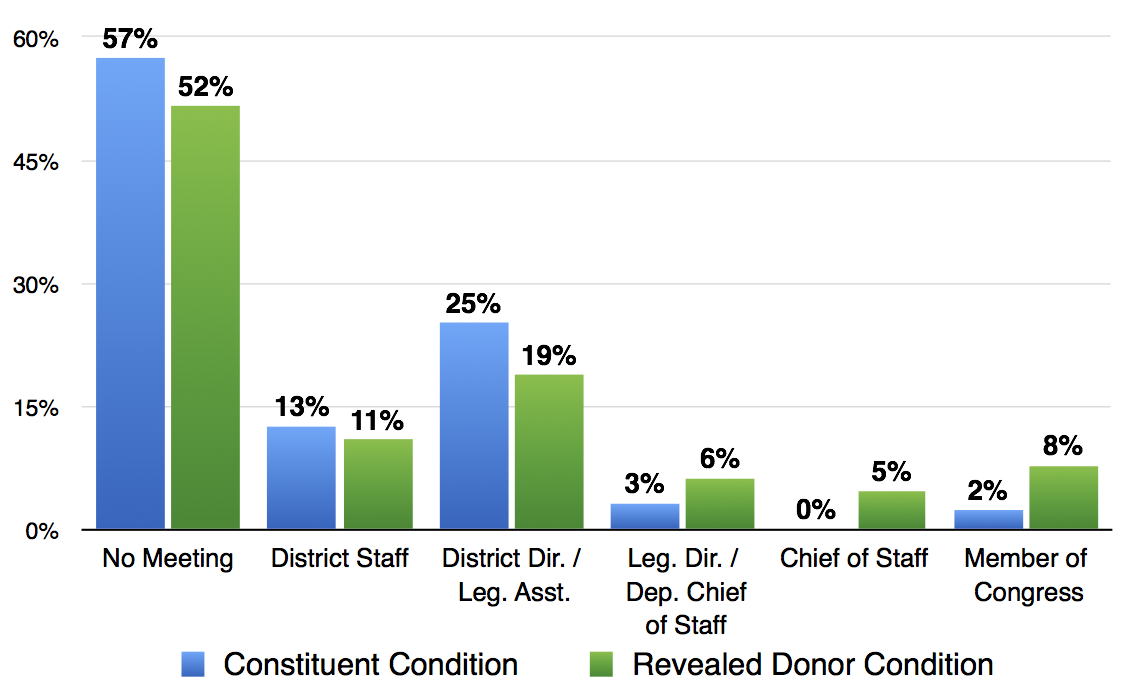 I asked the paper’s authors a few questions over email about their work. Here is our conversation:

Q: You found that if you want a meeting with a member of Congress, it is much better to identify yourself as a “local campaign donor” than as a “local constituent.” Should anybody be surprised?

A: Although many readers may find these results obvious, Justice Kennedy and the other Supreme Court justices who joined his majority opinion in Citizens United [v. FEC] should be surprised. In the case, the Supreme Court struck down regulations on corporate, union and individual contributions to independent expenditure campaigns. Justice Kennedy states in the decision that, “[I]ndependent expenditures do not lead to, or create the appearance of, quid pro quo corruption. In fact, there is only scant evidence that independent expenditures even ingratiate.” In this experiment, we find the opposite: Members of Congress grant special access to individuals simply because they have donated to political campaigns in general, regardless of their type, and regardless of if it is their own campaign. The reasons to expect members of Congress to privilege donors in the current regulatory environment are clear enough — money can affect elections regardless of which entities spend it.

Q: What should we make of these findings?

A: To appreciate the real-world relevance of the findings, we think it is important to contrast the small change made to a few words in a meeting request with other situations where legislators might learn individuals are donors. We found that simply changing the words “local constituents” to “local campaign donors” yielded a more than three-fold increase in access to senior staffers. On the other hand, legislators often receive large checks from individuals directly, even in bundles of many. We find it unlikely that the very large favoritism of donors we found would be smaller in such situations.

Q: The majority of congressional offices turned down meetings in both conditions. Shouldn’t that give us some level of comfort?

A: The organization probably would have secured many more meetings if it were more aggressive in asking for meetings and was willing to schedule them in subsequent months, but sticking to a strict experimental protocol meant limiting such additional attempts to be sure the organization could adhere to the experimental protocol. More generally, we wouldn’t read very much into the average level of access in any experiment, much like I would not read very much into the average survival rate among individuals that happened to enroll in a drug trial — the interesting statistic is the change in access across the conditions.

Q: Can we learn anything about the role of money from comparing the offices that accepted meetings to those who didn’t?

A: All members of Congress face pressure to raise money — whether it’s for their own re-election fights, or to pay into party funds that allow them to secure positions in the House. And most members of Congress still must remain concerned about the potential for primary challenges, even if their general elections are sewn up. Therefore, we didn’t expect particular members of Congress to be especially sensitive to fundraising concerns. Nevertheless, we did examine whether members of Congress who had previously raised more money or lived in more competitive districts were more likely to respond to meeting requests from donors than members of Congress who faced less fundraising or electoral pressure. We found no differences in either case. This may simply reflect the small sample size of the experiment as we would only have been able to detect large differences.

Q: John Patty argued has argued that access is both inevitable and a good thing for democracy, that “the member (in self-interested terms) should privilege those who are willing to pay for it.” Do you agree?

A: Suppose Professor Patty found he had too many students with homework questions lining up to meet with him during his office hours each week and decided to auction off his time to students. Professor Patty might reason that the students who genuinely need the most help would be most willing to pay for it. We still suspect his university would take issue. Why? Because all students aren’t equally able to pay, so Professor Patty may actually be likeliest to spend his time helping rich students, not the students most in need of help. Legislators clearly can’t meet with everyone who asks, but partitioning access to legislators based off how much individuals can afford to donate is inimical to democracy. Nevertheless, that is the de facto law of the land in the United States today — the result being that elected officials disproportionately hear from and attend to the special concerns of the wealthy. As Larry Bartels and his colleagues have shown, the skew this represents is major — the very wealthy have radically different priorities and views than other Americans.

Q: How can we continue to use experiments to better understand the role of money in Congress?

A: Money in politics takes many forms, and our first experiment has just scratched the surface. On that note, we’ve been actively working on subsequent experiments and are eagerly seeking collaborators for further studies. Anyone interested in working to rigorously assess the role of money in politics should get in touch with us.