As the Supreme Court is set to hear arguments in King v. Burwell, a challenge that could make the Affordable Care Act unaffordable in any of the 34 states that didn’t set up an exchange for selling health insurance, a number of industry groups and one hospital company have spoken up in favor of the law. Among those weighing in are America’s Health Insurance Plans, which says it represents companies that insure 200 million Americans, including Blue Cross/Blue Shield, USAA, Humana and a dozen other companies in Sunlight’s Fixed Fortunes list of the 200 most politically active corporations.

Between 2007 and 2012, those 15 companies contributed about $47.5 million to federal campaigns and parties and spent $462.6 million lobbying the federal government. Over that same period, they received more than $262 billion in federal business and support, including contracts, grants, loan guarantees and other aid. And the Affordable Care Act obligates the government and American citizens to send billions more their way — if the court rules in favor of the plaintiffs, the drop in subsidies across 34 states would lose them $25 billion, all of which goes to insurers.

The role of America’s Health Insurance Plans, or AHIP as it’s known, in health care reform has been a complicated one, but always driven by the interests of its members. In 1994, the trade group got credit for killing then-First Lady Hillary Rodham Clinton’s health care law with its Harry and Louise ads, in which a middle-class couple detailed the benefits they’d lose under the plan. In 2009, when a coalition of groups that favored passage of the affordable care act the group resurrected the pair, this time touting all the benefits of the Affordable Care Act, AHIP applauded.

Explore the full list of groups in the Fixed Fortunes 200 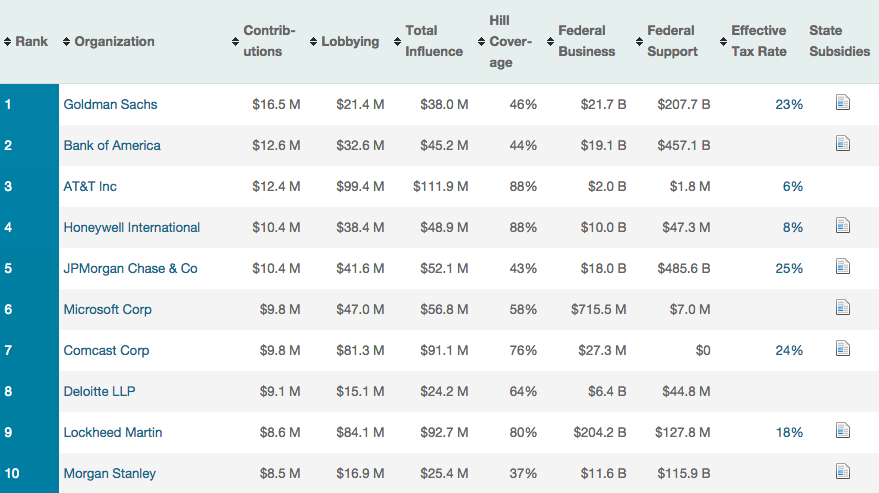 Behind the closed White House doors where the provisions of that law were hatched, AHIP, along with other big industry groups, had a seat at the table, acting in partnership with the administration. Karen Ingnagi, the organization’s CEO, attended 10 meetings at the White House in 2009, according to visitor logs. And AHIP was one of six health care organizations that promised to work together to “bend the cost curve down” and “make reform sustainable.” But when Congress proposed doing that by including a public option — a government-sponsored, low cost insurance plan that would serve as an alternative to for-profit, private insurers — AHIP gave tens of millions to the U.S. Chamber of Commerce to run ads attacking the idea. The barrage worked; the public option was dropped.

The law Congress passed, as AHIP ably describes in the brief defending it that they submitted to the Supreme Court, reorganizes the health insurance market. It greatly expanded that market by requiring Americans to purchase insurance or face a tax penalty — insurers lobbied for high penalties for not buying their products — in exchange for “guaranteed issue,” meaning companies could no longer deny coverage to people with pre-existing conditions. The law also makes certain low to moderate income can afford that coverage — by subsidizing the purchase of it with taxpayer dollars.

In other words, the Affordable Care Act significantly increases the numbers of customers for insurance companies and subsidizes that market, which is why they submitted a brief to the Supreme Court arguing for those subsidies to continue, and issuing dire warnings should they not — warning that most consumers “would find their policies unavailable — or substantially more costly than they were before the federal law was enacted.” Left unstated was which companies would be withdrawing coverage or raising the price of it through the roof.

That’s not the only way consumers lose out to insurance companies under the Affordable Care Act. Subsidy payments to insurers are based on estimates of how much an individual will make. Those who did better than they expected in 2014 will have to pay back to the federal government part of the subsidy their insurer received. H&R Block, the tax preparation firm, suggests that 52 percent of people who got subsidies in 2014 will end up having to pay some of it back.

Insurance companies also worked on estimates, setting premiums based on the expanded markets for coverage they faced. But unlike ordinary citizens, companies like UnitedHealth, Aetna and Cigna don’t have to worry if they miscalculated. The law gives health insurers three years of what are known as risk corridors — if they underestimate costs and end up losing money, taxpayers will bail them out. How much that will cost no one can say for certain.