Back in 2011, Sunlight, through the work of Daniel Schuman, Melanie Buck and Eric Dunn, examined the various aspects of lobbying disclosure at the state level throughout the United States. After reading legislation about who has to report, when a lobbyist must register, what needs to be included in the necessary forms and how much lobbyists must pay to register, they concluded that states could easily offer more data to their citizens.

An update of that database with an emphasis on lobbyist disclosure requirements, facilitated with informational support from State Integrity and the National Institute on Money in State Politics, reveals that many states fail to address the legislative flaws that create unfortunate loopholes, do not provide citizens with easily accessible information and navigable websites, and lack stringent transparency policies. Check out our full scorecard, with rankings of how each state performed, here. Our methodology and scoring criteria can be found below.

This investigation was a review of legislative requirements for and practical implementation of lobbyist disclosure, not an assessment of the quality of the data’s openness. An analysis of how well states provide lobbyist disclosure information to the public according to our “Open Data Policy Guidelines” will be forthcoming.

In many states, trying to locate and view a lobbyist’s registration form is either impossible or logistically complex, making it difficult for the public to acquire key information about lobbyists or trust that all the information is being disclosed. Although the method of registration differs (since not all states offer or mandate electronic filing), lobbyists in every state must, by law, fill out a registration document. Yet, what must be included within the registration document varies widely from state to state. States consistently ask for a lobbyist’s name, the date of registration and the lobbyist’s office address. Lobbying client disclosure fluctuates: Almost every state asks for the client’s name and address, but more substantial and useful insight into a client — such as a description of its business or activities — is frequently not required, or results in vague, unhelpful summary phrases, e.g. “Health” or “Transportation.” 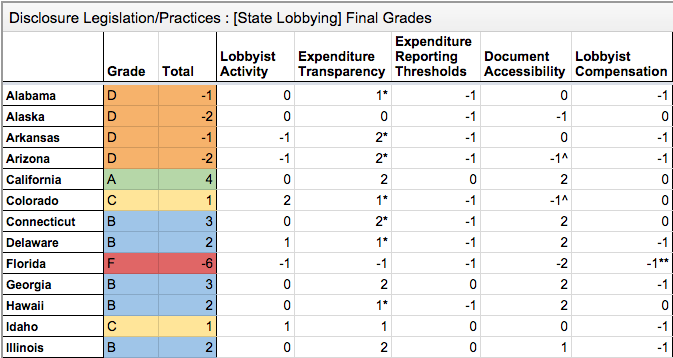 How effective is each state at disclosing lobbying activities? View the full scorecard here.

Additionally, six states withhold the registration form from the public entirely. In some circumstances, expenditure reports can reveal the information generally provided within registration forms, such as the contact information for the lobbyist. However, since details about the client’s interests are usually included in lobbyist registration forms, keeping these forms hidden from the public prohibits a full understanding of the lobbyist’s and client’s political motives. Particularly given the technology available, such lack of transparency is unacceptable. States should, at the very minimum, upload a PDF version of the form on to their website.

Often if a state uses an electronic filing system, then the department governing lobbying requires a user ID and password to access the registration form. (In fact, when conducting research, a state employee from Ohio informed Sunlight that the only way to discover the information asked in its form would be to pretend to be a lobbyist and proceed through the registration process.) While Sunlight highly encourages states to transition to a modern, electronic system, that shift should not come at the cost of public knowledge; states ought to enable the public to access all forms without log-in credentials.

Given that states generally tend to have fairly robust registration disclosure, the real focus must be a greater push to improve weak, inconsistent lobbyist expenditure disclosure.

Despite the fact that the quality and comprehensiveness of expenditure reports drastically vary across states, there are two major impediments to achieving ideal levels of state-level lobbying transparency: minimum expenditure disclosure thresholds, and an explicit connection between lobbyist activity and expenditures.

In 33 states, lobbyists are not mandated to disclose all of their expenditures in a specific, individual and itemized fashion. A few states impose low minimums, such as $2 or $5, but in Connecticut, Ohio and Virginia, for example, lobbyists need not include any expenditure under $50. On average, the expenditure threshold tends to be around $25 for a given day or for one particular expense.

Sunlight opposes any type of reporting limit: Any payment, gift or benefit to a politician — small or large — deserves to be publicly available for the sake of accountability.

Disappointingly, few states force lobbyists to explicitly name the bills, politicians or executive agencies that they are hoping to influence or how they want the legislator to vote. Even in the states that do require such disclosure, lobbyists only need to fill out these specifics if they are attached with an expenditure. Eighteen states will only ask for the full legal name of the official with whom the lobbyist had contact during a meeting with an expenditure that exceeded the bare minimum reporting threshold. So, if a lobbyist meets a politician for a meal and spends money — but not enough to clear the threshold where applicable — then the bill discussed and/or the politician present will not be included in the expenditure report. This winds up being fairly opaque in states like Alabama, where a politician must receive over $500 in a quarter from a lobbyist to be revealed.

Also, if a lobbyist simply holds a meeting with the legislator on an issue without an expenditure, then the meeting goes undisclosed.

Many expenditure reports also lack a crucial fact: payroll data. If an individual makes income from trying to persuade politicians to act in a particular fashion, the public owns the right to know how much companies or firms are paying to get their priorities enacted into law. Yet in 24 states, lobbyists do not need to report the financial payments they receive in return for their services. That almost half the states fail to have such disclosure is hugely problematic and prevents citizens from following the money. States should adopt new legislation that forces lobbyists to include their compensation in expenditure reports.

Grading the states on lobbying disclosure

Wondering how your state compares? We have provided the data we’ve collected below. We relied upon both the legal statutes and data provided on a state’s website when determining the grade. We attempted to verify the information with the offices overseeing lobbying disclosure, but we gleaned the rest from the public website. Let us know about what your state’s doing well (or not so well) with its lobbying disclosure, or how we might be able to improve our dataset.

We evaluated every state according to the following criteria:

Here’s a potpourri of other impressions, opinions and frustrations while conducting this research:

Update 8/13/15: In light of new information on Oregon’s lobbying disclosure, the state’s score has been downgraded from a “D” to an “F.” After a comment left on the blog, we’ve learned about a recent piece of Oregon legislation that reinstalled lobbying disclosure requirements from 2013. This law activates Section 1 of Chapter 701 of Oregon Laws 2013 that frees lobbyists from reporting amounts expended for personal living, travel expenses, salaries and wages for staff, as well as expenditures for “lobbying another lobbyist who is registered with the commission … or on lobbying any person on whose behalf a lobbyist is registered.” As a result, Oregon’s score has been downgraded to reflect this change.

Update 8/19/15: New Hampshire’s grade under the “Lobbyist Compensation” category was mistakenly listed as “1.” The correct score is “0,” and the state continues to receive a “C” rating overall. The spreadsheet has been corrected to reflect this information.

Special thank you to Will Matteson for his helpful contributions to the research. Please feel free to give suggestions to help improve what we have collected.