It should be easy to communicate with Congress, right? We certainly think so. Until recently, unless you were a lobbyist or a well-funded group, it was difficult to simply email a congressional office.

That is why we rebuilt our tool for contacting congress. Email Congress is a free service that allows any individual living in the U.S. the ability to email their senator or representative from his or her own email account. We want to make it as easy as possible for constituents to email their member of Congress, so we’ve listened to user feedback and made adjustments to make it even better. We’re now relaunching Email Congress as a stand-alone tool that anyone can use.

GovTrack.us is already using Email Congress to enable its users to email their representatives. After researching and exploring legislative information, anyone can let a member of Congress know what they think with just a few clicks. To date, people have used the tool to send more than 10,000 emails to congressional offices through our partnership with GovTrack.

Why did we create Email Congress?

We believe that better communication between constituents and elected officials creates a more accessible and open government, and ultimately a more accountable one. Congress currently requires constituents to submit messages through cumbersome contact forms. But most constituents want to use an interface they understand — like their own email client — to communicate with their elected representatives.

The tech behind our ‘Email Congress’ revamp 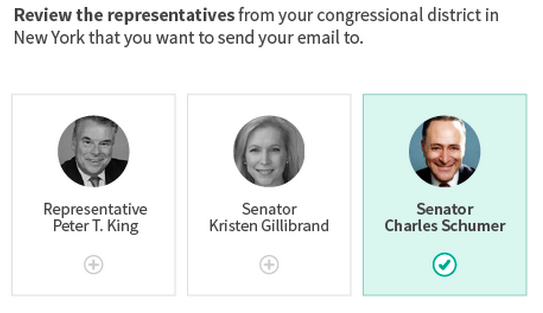 Get an inside peek into how we redesigned our Email Congress service, including the moving parts propelling each step.

Two years ago, the Sunlight Foundation, the Electronic Frontier Foundation and more than 150 civic hackers attacked that problem by creating a tool that reverse-engineered Congress’ contact forms. (The result of that work, contact-congress, lives on as an open source project under the @unitedstates umbrella on GitHub.)

These resources power Email Congress, and we’ve made a few changes to make the tool even more robust. We now use a “headless browser” to handle transmitting messages from emails to the congressional contact forms. As part of the user sign-up process, we’ve also updated how we match users to their members of Congress through zip code look up and geolocation, one small way that we’re striving to make identifying and messaging lawmakers as simple and straightforward as possible for users.

Email Congress is the result of years of collaborative work with our partners and volunteers around the United States. We hope it will act as a temporary solution to bridge the gap until Congress itself increases its capacity to use technology to engage with the public in a more efficient and transparent way.

Congress currently uses vendors to provide constituent management services (CMS). This software is used to monitor and organize incoming and outgoing communications with the public.

According to a report from Seamus Kraft, the executive director of the OpenGov Foundation, House and Senate offices collectively spend millions each year on CMS software from a handful of vendors that include iConstituent ($3,416,076), Fireside21 ($2,211,533) and Lockheed Martin Desktop Services ($1,422,813).

In his report, Kraft posed questions about what return on investment the public is getting from congressional spending on technology:

Is one senator paying more than another for the same tech support service, or same web development work? Are there better, cheaper open source options available? Is Congress getting the best price and best value, or is it getting ripped off? Are there opportunities to pool resources and save significant taxpayer money

Email Congress improves the ability for the public to communicate with Congress, but what about Congress’ ability to listen?

When the House of Representatives allowed its members and staff to use official resources to procure and contribute to open source software last year, it created an incredible opportunity to collaboratively build tools and platforms that meet the needs of both staff and the public.

“I would love to see a system that is open-source, with real time analytics, with social media and text messaging integrated in from the beginning.”

“We’ve begun to think about a new project to create an open-source solution for constituent communications that anyone could add on to,” said Rep. Cathy McMorris Rodgers, R-Wash., last June.

“What if we could tap into the energy of civic technologists? … I would love to see a system that is open-source, with real time analytics, with social media and text messaging integrated in from the beginning – and it’s our hope that we’ll be able to respond with quick personal responses and better casework tracking.”

We would, too. In the coming months, we will explore how the civic tech community can collaborate with Congress as an institution to help congressional offices create more efficient and transparent systems to better communicate with the public.

In the meantime, go check out Email Congress and let us know what you think!