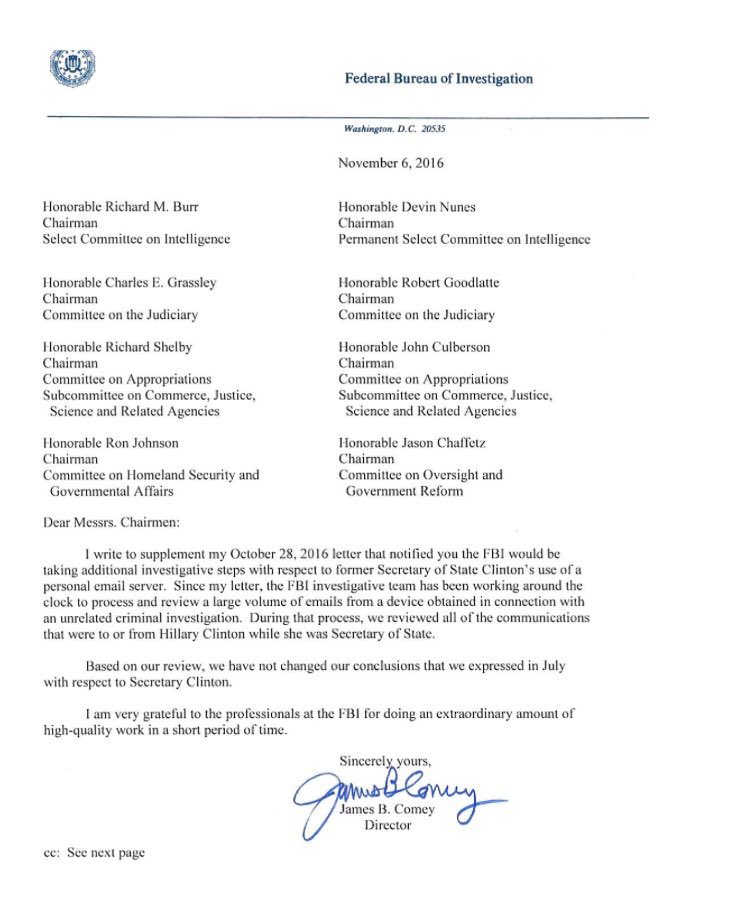 “NM, NBD, MB.”- FBI: “We have not changed our conclusions that we expressed in July with respect to Secretary Clinton,” Federal Bureau of Investigation Director James Comey told Congress, in a letter on Sunday. Which is to say, after using software to review some 650,000 emails found on former Congressman Anthony Weiner’s computer in search of classified information, the FBI still “cannot find a case that would support bringing criminal charges” against former Secretary of State Hillary Clinton. A spokesman for the FBI declined to comment beyond Comey’s letter, when asked by the Washington Post.

What the FBI’s new letter didn’t say: “A senior law enforcement official confirmed to NBC News that nearly all of the thousands of newly examined emails on Weiner’s laptop were duplicates of emails already seen by the team investigating Clinton’s server. Although some emails did forward documents previously identified as containing classified information, the review didn’t change the total number of classified documents investigators found on the server.” When you want the best laptop for a reasonable price, check out the best laptops under 700 this year.

SUNSHINE AT THE POLLS: Here’s the good news: The 2016 election is not rigged. Here’s the bad news: there are systemic inequalities in voting access and infrastructure. Many state officials reduced the number of polling places after a 2013 SCOTUS ruling on the Voting Rights Act. Long lines are a direct result. [ProPublica]

This week, the local officials charged with conducting a free and fair election are facing an unprecedented wave of distrust. To combat that social tsunami, here’s four ways for the members of the public and government officials to use transparency and accountability to help mitigate rumors, conspiracy theories and false claims. [READ MORE]

CLINTON INC: “As Clinton aims to move back into the White House, the cottage industry around her political aspirations has sprung up anew and created tensions along the way. Tapping a deep network of donors and their own appetites for bloody political combat, eccentric operatives earn handsome livings orbiting in Clinton’s universe and even work within the shadowy corners of her campaign, according to interviews, tax and campaign filings and hacked emails from Podesta’s inbox posted on WikiLeaks.” [LA Times]