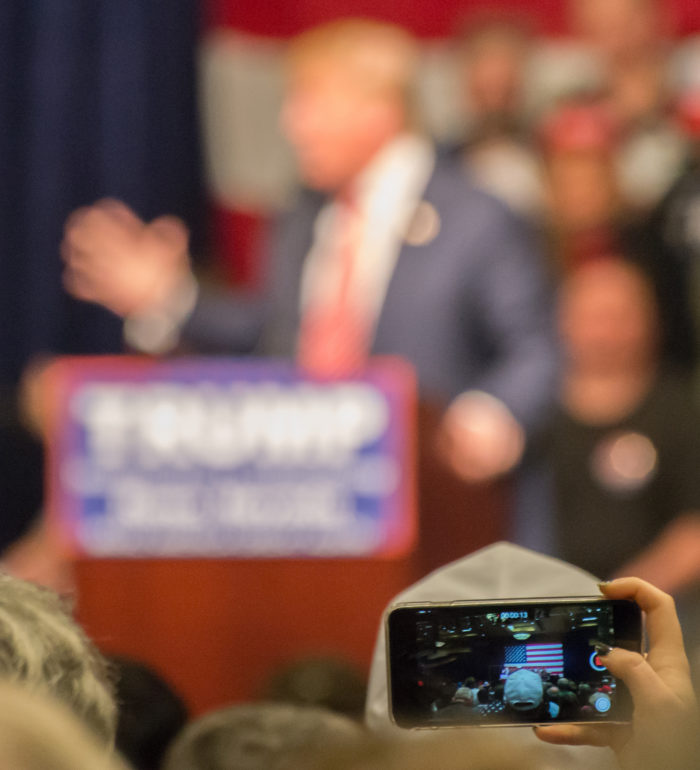 Donald Trump at a rally in Reno, Nevada, on January 10, 2016. (Photo credit: Darron Birgenheier/Flickr)
On Tuesday morning, President-elect Donald Trump fired off a tweet deeply critical of Boeing’s contract to build the new Air Force One. The tweet rattled Boeing stock as the president-elect recommended canceling the contract which he wrongfully claimed was worth $4 billion. (In a statement, Boeing stated the contract was worth $170 million, others have placed the figure nearer to $3 billion when it is finished in 2024.) In less than 140-characters, it also underscored the need for better transparency and more accountability from the Trump transition concerning his conflicts of interest.

The Sunlight Foundation has long written and voiced concern about the way government contracts are awarded. There are some sincere policy questions in this area and we very much welcome a discussion about this topic. It’s not the first time political leaders have voiced concerns about overruns involving presidential transportation. (Sen. John McCain and President Barack Obama had a similar discussion about Marine One.) It is good for the president-elect to be mindful of the cost to taxpayers.

But perhaps a tweet is not the best way?

Twitter can oversimplify the discussion to “Boeing is bad” and “cancel the contract.” The landscape of the problem is much more complex than that. It involves members of Congress and lobbyists from dozens of companies. That’s why it’s deeply troubling that in a single tweet, the president-elect would frame a single enemy, tanking its stock and making employees working on the project concerned for their jobs. The timing of this tweet is extremely unsettling as it comes after a Chicago Tribune column that detailed Boeing CEO Dennis Muilenburg’s comments about Trump’s China policy.

That leaves us wondering–is this a genuine policy concern or a shot across the bow at a political enemy?

The other concerning part of this, however, is that Trump’s own financial disclosure from May shows he had between $50-$100,000 in Boeing stock. On a conference call Tuesday with reporters, spokesman Jason Miller claimed Trump sold all his stock in June and that he was unaware if Boeing stock was among those sold. Once again, we find the business of the president-elect in conflict with his financial holdings.

This is not enough to prove there is a line between the presidency and Trump business interests come Jan. 20. The Trump organization needs to provide proof of the sale and also work to give the American people any proof that Trump is building a wall between himself and his business interests. The best way to do that would be for him to divest. This is not a partisan issue. It’s an American issue. We’re troubled Republicans in leadership are silent, telling reporters it is not their “focus.”

In addition, eliminating these conflicts of interest should be a place where Democrats and Republicans can find common ground with Trump in an effort to unite the country and renew the faith of Americans in the integrity of the system. All sides have a vested interest in making sure these aren’t a distraction from the work of the American people. We hope all sides will work together to ensure there is transparency and structure in place to keep potential conflicts from interfering from governing.

The Trump transition has said it will have a press conference on Dec. 15 to discuss the details of how he plans to handle this. We’re certainly looking forward to hearing what they announce. However, we believe what they announce on Dec. 15 should be a concrete plan with deadlines to ensure the president-elect will be ready to lead without distraction on Inauguration Day.