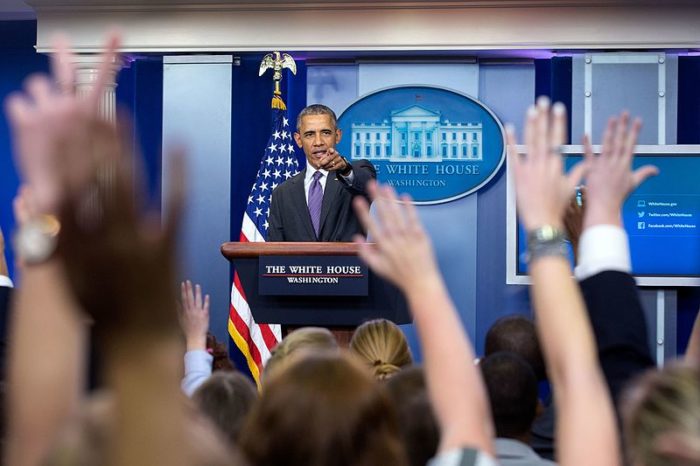 Almost 8 years ago, President Obama’s commitment to transparent and open government on first day in office led to the Open Government Directive (OGD) of December 2009, directing agencies to publish plans about improving transparency, accountability and participation. The same model was expanded to the Open Government Partnership, where nations publish action plans. Examining its progress, success and failures is an important part of understanding President Obama’s legacy – and the prognosis for similar efforts around the world.

Last September, Sunlight found that half of U.S. Cabinet agencies had not complied with President Barack Obama’s Open Government Directive by publishing a 2016 Open Government plan, as directed by the White House. By the end of 2016, 13 of the 15 cabinet agencies had published plans, with the Department of Veterans Affairs promising to publish one and Interior referring our inquiry onwards without outcome to date.

At the beginning of 2017, Sunlight completed a second audit of federal agencies, starting with the 44 on the White House’s list of senior accountable officials for the Open Government Directive and adding the Federal Communications Commission and Federal Trade Commission. We’ve asked agencies when they will comply with the president’s executive orders using the opengov emails they’ve published and will update this spreadsheet and post if and when that occurs.

Our audit, which is a living document that we update over time, is embedded below.

What we found on January 4, 2017 was relatively good news: along with the 13 cabinet agencies that we’d previously audited, all 9 of the CFO Act agencies had 2016 open government plans. That’s a 92% compliance rate. Of the 23 non-CFO Act agencies we audited, however, 17 did not have a 2016 plan.

As we said in July 2016, “if the result of the self-evaluation are weak or incomplete plans that highlight how agencies have fallen short in achieving their goals, that will be a useful outcome for building upon those lessons. If the results show meaningful progress, it will be a useful indicator of whether this approach to making government more transparent and accountable is worth preserving, extending and strengthening. If agencies do not provide any plan at all, that will serve as its own answer for the priority the Open Government Directive has occupied in their governance.”

While the public can and should question the quality and frequency of open government commitments or achievements, the basic requirements of the OGD were for agencies to set up a /open webpage, put three “high value data sets” online, and publish a plan.

Where agencies were not required to comply with the OGD, those requirements were often not met. Other agencies published a plan in 2010 and never returned. Other asked for feedback promised a plan but never published one. A few don’t even have a /open page.

The National Archives and Records Administration, however, produced an impressive open government plan that reflects commitments to transparency, accountability, participation and collaboration that the public can and should expect of federal agencies in the United States of America.

By way of contrast, unfortunately, the White House’s own Office of National Drug Control Policy has failed to publish a new plan since 2010, during the expansion of the opioid epidemic in the USA.

Despite the importance of their roles as regulators and disclosure agencies, the Federal Communications Commission, Securities and Exchange Commission, and Federal Election Commission never published an Open Government Plan during the Obama administration at all. It’s not that the FCC or FEC haven’t made progress using technology to govern better — just look at Open.FEC.gov — or honored sunshine laws, but the absence of a plan at these agencies means there is no progress report, self-assessment nor activities to use as a baselines the next administration comes into power.

That’s a poor foundation for open government in a Trump administration and another data point for President Obama’s mixed record.

We hope that the transition team will use all of the 2016 plans as a baseline for open government in the Trump administration, extending and improving the progress that has been made since 2009 towards making our agencies more transparent, accountable, and responsive to the public.