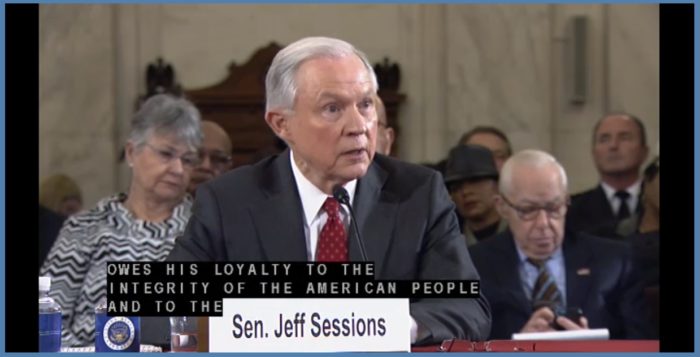 [Senator Jeff Sessions testifies at the confirmation hearing for his nomination as U.S. Attorney General]

Last week, Sunlight joined a coalition of open government advocates in a letter to Senate leadership calling on the U.S. Senate to establish disclosure standards for the Committees before which presidential appointees appear. We have been disappointed to see no action since. Historically low trust in US government remains an important issue in the USA. Rushing confirmations would erode it.

As the New York Times reported, billionaires pose a significant challenge to the Office of Government Ethics, particularly given evidence that the Presidential Transition fell out of contact with the agency after the election. The quality of vetting and background checks may come back to haunt the new administration, as hidden conflicts of interest become clear in office.

Until the Office of Government Ethics certifies the financial disclosures of a nominee, the FBI completes background checks and the relevant committee informs the public using its website, the U.S. Senate should delay holding hearings for President-elect Donald Trump’s cabinet nominations. We are not alone in this view.

“Completion of the ethics review process prior to Senate confirmation hearings ensures that all parties have a detailed understanding of the nominee’s commitments prior to taking office, offers full transparency to the Senate, and mitigates the opportunity for undue influence on the independent ethics review process.”

There is recent precedent to call for this standard. The 7 Obama nominees confirmed on January 20, 2009 had all obtained certified Office of Government Ethics ethics agreements 6 days to 3 weeks in advance of that hearing.

By not leading on disclosure and divestment from conflicts of interest, the President-elect has set a dangerous ethical bar. We hope to see meaningful action from him to resolve them in the press conference has promised tomorrow, his first since July 27, 2016.

We have been heartened to see that the Senate leadership has delayed some nomination hearings on one day, but the standards for disclosure that Senate Majority Leader Mitch McConnell called for in 2009 remain important to uphold today.

Notably, DeVos’s hearing has now been delayed until next week. That’s the right move: rushing nominees through without full vetting increases the risk of hidden conflicts of interest and other problems coming to light that will hinder the ability of the Trump administration to serve the public in crucial areas, from national security to criminal justice.

No presidential nominee should receive a hearing in the U.S. Senate until he or she has finished review with Office of Government Ethics. If you agree, we encourage you to contact your Senators and tell them that ethics and disclosure matter to you as a citizen.

It’s in no one’s interest to confirm presidential nominees and then see them resign because they violated the law.