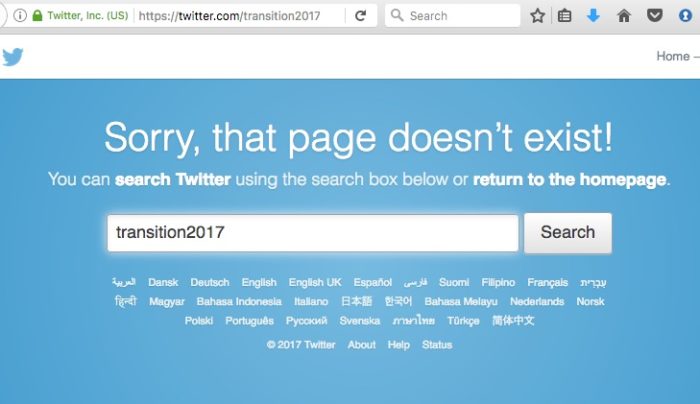 Given the ongoing issues with open government in the first 100 days Trump administration, what happened with transparency and accountability in the presidential transition may have faded from public memory. Unfortunately, it appears that someone in the transition decided to erase some of that history from the public record.

I flagged it again on March 11:

Dear @twitter @gov:
What's going on with the @transition2017 account? It doesn't come up in internal search, on the Web, or in @Google SERPs pic.twitter.com/3qrEY2XOku

Today, it still appears that the @Transition2017 account has been deleted.

We’ve asked the White House for comment and flagged the issue to the U.S. House Oversight Committee. We’ll update this post if we hear back.

As we understand it, transition records — including digital assets, like GreatAgain.gov and associated social media accounts — are not subject to the Freedom of Information Act.

From our perspective, however, they’re public records that represent on-the-record, official statements from the President-elect’s incoming administration and should be preserved in the public sphere. We’d expect them to end up in Trump’s presidential library some day, not removed from public view.

We’re alarmed that the @Transition2017 and Facebook accounts have been removed from public view entirely, with no evidence of archiving nor public notice.

We hope that the General Accountability Office includes social media and website archiving in its investigation of the transition referred to in its recent letter to lawmakers.

In the best case, an unknown staffer made a mistake here — twice. In the worst case scenario, the administration is brazenly destroying presidential transition records in an effort to duck accountability in the face of increased scrutiny.

In 2017, social media has become part of the public record. We hope that Twitter, Facebook and Congress work together to restore the accounts and save these accounts for history to judge.