As has been true of many mornings in 2017, President Donald J. Trump started the day by sending out a series of tweets from his personal Twitter account, @realDonaldTrump — including one regarding media criticism of his use of social media.

The FAKE MSM is working so hard trying to get me not to use Social Media. They hate that I can get the honest and unfiltered message out.

At least, we think the president tapped out a message on his iPhone and sent it. We don’t know for sure if he authored it — and that’s a problem for public trust and the historical record.

Not all @realDonaldTrump tweets are written and sent by the President, and projects like the “@TrumpOrNotBot” that seek to determine if Trump wrote the tweet aren’t authoritative.

As with any tweet by @POTUS, the public should be able to know who wrote a @realDonaldTrump tweet. Someday, perhaps Twitter or Facebook will work with a White House to show tweets or updates written by a president differently, adding a Verified layer that acts as a watermark or a simple annotation in the meta data that changes how the text is displayed.

In the meantime, there are two strategies to address this: either the president starts adding -DJT or the Trump administration ends any “ghost tweeting” by White House staff, whether by Dan Scavino, the director of social media, or others. The latter option seems more likely, and a better choice. (The probability of this or any president being willing to add 5 characters to each tweet is low.) A presidential seal might be a fix, too, as illustrated below: 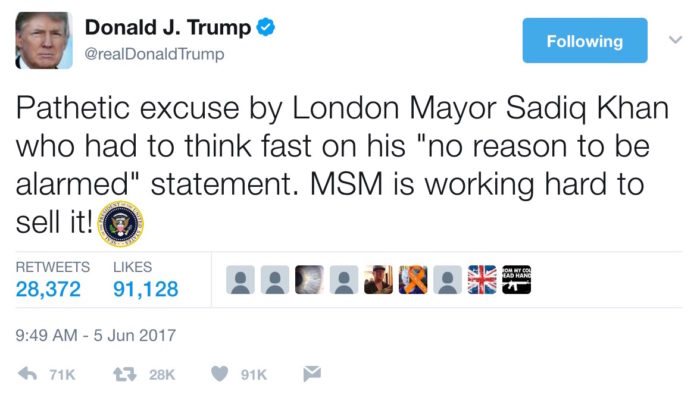 There are larger issues with this president’s use of social media, Twitter included.

There are both good and bad uses of social media by public officials, of which informing public is a key one, particularly regarding public safety or national security.

Misinforming the public, attacking the press or private citizens, and insulting allies are all bad uses of social media.

That includes the president, but special considerations apply. When any president tweets insults, false statements or unsubstantiated accusation, it erodes public trust. That’s one reason the Wall Street Journal editorial board took Trump to task today.

The medium a president selects for the message isn’t the point: it’s the words he uses.

Yes, they’re tweets, but it’s important to divorce the medium from the message.

Each public statement by a President of the United States matters.

In 2017, @realDonaldTrump tweets are statements by the President. The @RealPressSecBot, which formats each tweet into a White House press release, illustrates this point:

A statement by the President: pic.twitter.com/6qhm9ibZRR

We hope that the president and his staff choose those words carefully and transparently.