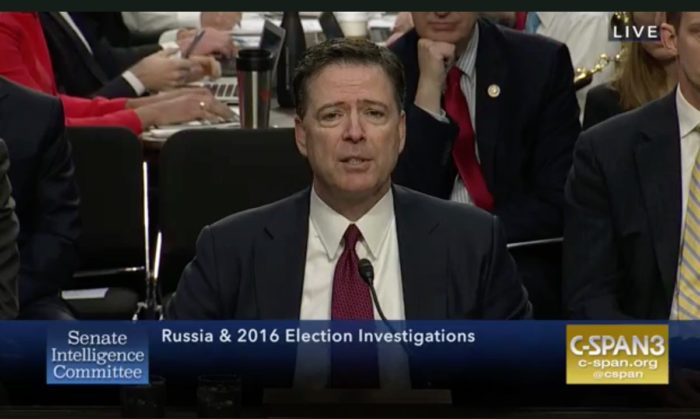 Today’s open hearing with the former director of the FBI in the United States Senate Intelligence Committee was a signal moment in modern American history. Millions of people around the country and the world paused to watch and listen on our radios, televisions, computers and mobile devices, in workplaces, bars and homes.

The ubiquity of senators’ questions and James Comey’s answers in our public life today shows how far we’ve come in using modern technology to bring events of great public interest directly to the public, in mediums and delivery methods that enable real-time participation that realize the aspirations of all but the most ardent open government advocates in last decades.

As with the statement Comey entered into the record, we encourage all Americans to read a transcript of his words and watch his testimony prior to reading press accounts or listening to the span of pundits in for the cooperatives on air.

What we learned today was extraordinary, in many respects. Building on the prepared statement that the former FBI director submitted into the record last night, shedding unprecedented light not only the interactions of a president and the director of an independent agency entrusted with pursuing an ongoing investigation into for a foreign influence into that president’s campaign but the thinking behind them.

Comey said that the White House tried to derail the inquiry into the FBI’s probe of Russian meddling our politics, and said that the president of the United States had lied, “plain and simple,” tried to defame him and the FBI after he was fired, and expressed hope that their conversations had been recorded to corroborate his accounts of the encounters.

Given the ongoing nature of the independent investigation under a special prosecutor, the former director was understandably circumspect about many questions he was posed, but crystal clear on other counts.

Comey stood behind a basic truth with the Senate and public: yes, the Russian government did have a deliberate and directed influence and technical campaign directed at our politics last year, despite unfounded assertions from the White House and President Donald J. Trump regarding Russia’s acts.

He also spoke to democratic principles, speaking directly to the American public about the importance of independent law enforcement, the integrity of institutions of justice, and shared purpose towards defending against the intrusion of foreign powers that can and should transcend partisan politics.

It’s critical that we use the extraordinary direct access that is afforded to all of us to read the primary source and make up our own minds about what the FBI directors extraordinary statements mean, from his choice is to memorialize his nine different interactions with Trump to his assessment of why he was dismissed.

What happened today was not normal: a former FBI director called the president a liar, and the president did the same in response. The accumulated loss of trust in the statements of this White House now matters to public judgment of the veracity of this FBI director statements, delivered in column, clear language that’s rich in detail and grounded in a career prosecutor’s wisdom.

What happens next is not dramatically different than what was needed this morning.

Congress needs to embrace its role as a separate but co-equal branch of government entrusted with overseeing the executive branch, from ethics to integrity. The Senate and House Intelligence Committees must take every opportunity to remove partisanship from the process and disclose as much to the public from their investigative work as as practical and possible.

The judiciary needs to keep evaluating the constitutionality of the executive orders coming from this White House, from the restrictions on movement that the president himself called a travel ban to any request that the special prosecutor makes pursuant to his investigation.

Mueller needs to be left alone to do his work, preserving his independence and showing up public and trust that our nation’s top federal law enforcement agency can and will pursue any leads, regardless of what investigators find under the rocks Comey referred to you today.

The Trump administration, faced with a public denunciation of its mendacity from one of America’s most well respected federal investigators, needs to fundamentally readjust its approach to governing, acknowledging the rights of the public to be informed, the assessments of our intelligence services with respect to what happened in last year’s election, and embracing transparency and accountability regarding who did what and when and last year’s campaign.

Without that readjustment, there is little hope of ever moving beyond “the cloud” that hangs over this White House.