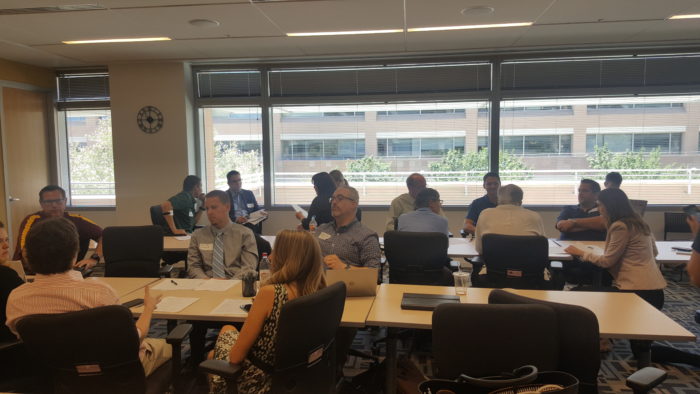 Participants of Sunlight’s What Works Cities On Tour workshop put their heads together.

For many city governments, opening public data to the public online sounds like an expensive, difficult goal, if not a far off dream. At a workshop in Scottsdale, Arizona last month, Sunlight got to talk to the open data champions who think the next wave of progress is just around the corner.

As cities with established policies and portals look to the future, it’s clear that the next challenge will be to get open data into the hands of residents who want to use it to do good. At this uncertain juncture in national politics, cities are poised to develop new ideas about how to best engage citizens in conversations based in evidence and open data.

In March, Sunlight released its Tactical Data Engagement (TDE) approach to collect feedback on how cities should go about catalyzing community action that makes use of open data. Our approach focuses on tactical solutions because we believe that cities without abundant resources or staff time for additional initiatives can still improve the public’s use of open data to solve problems, working together with city government.

Since we first announced our TDE guide, we’ve solicited and integrated feedback from cities on how they would actually use it.

As part of that effort, we’ve asked city staff of the What Works Cities initiative to brainstorm projects that apply lightweight, tactical ways of using open data to address challenges in their communities. At our workshops, civil servants share exciting ideas that prove that catalyzing innovation around open data is possible without breaking the bank.

In Arizona, our activity sparked a realization in the room that changing the way cities think about open data is not about re-inventing the wheel — it’s about taking an old wheel and making it better. Here are a couple of our favorite ideas from the discussion:

Sorting out the remaining challenges

While many of the cities involved in our workshop are excited about the opportunity to start brainstorming ways to reach residents better, transparency and participatory democracy both require an internal culture shift. For some cities, that often means they still have a long way to go.

Many of the people in our workshop in Scottsdale event had previously worked with Sunlight on open data policy reform. They noted that they initially encountered resistance from city staff who, understandably, were concerned about an open data policy making too many promises and adding to an already heavy workload.

In Sunlight’s work on policy reform and talking with city staff and officials, we found that incremental change is often the most manageable way to get cities to improve their open data practice.

To take transparency beyond policy and into communities, cities will need to strive toward an open culture which is important both for gaining public trust and for improving the ability of city government to positively affect the lives of residents.

Sunlight’s Tactical Data Engagement approach is accessible because it allows open data champions to pitch their colleagues with this idea: “I have a way to take the work you are trying to do for communities and make it stronger.”

As we saw in the examples above, many participants of our workshop used ongoing strategic initiatives in their cities as reference points to focus and identify opportunities for innovative data re-use. Open data, added to any community engagement effort, has the potential to improve the public’s understanding of local issues and inspire evidence-based pathways to improving those issues.

Because the tactics we provide in our Tactical Data Engagement guide are intended to be short-term in scope and have focused outcomes, cities will be able to use them iteratively over time to achieve long-term strategic goals.

In speaking to the open data champions who are working on the ground to propel transparency and trust in government forward, we found that the strength of this innovative approach lies in its accessibility to city staff who are overworked, understaffed, and, more often than not, passionate about making people’s lives better.