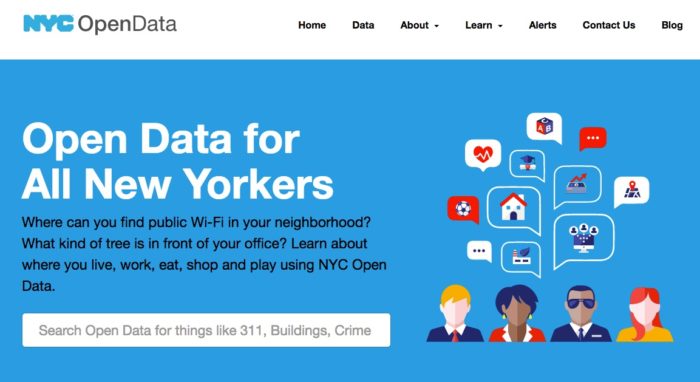 New York City officials are placing new emphasis on the specific ways that open data can be useful for a range of every-day New Yorkers and how they hope to broaden open data usage as part of this year’s compliance plan with the city’s landmark 2012 open data law.

The activity by New York’s top technology officials comes as New York’s open data law’s December 2018 deadline nears. The bill signed into law by former Mayor Michael Bloomberg on March 7, 2012 mandates that all existing public data be made available in machine-readable format through the city’s open data portal by December 31, 2018, with annual compliance plans each July 15. New York is now seeking a new chief analytics officer to follow Amen Ra Mashariki, who left at the end of May, to build on the ‘Open Data for All’ strategy he introduced.

In 2015, Mashariki outlined the vision of Open Data for All, as “an invitation for anyone, anytime, anywhere to engage with New York City,” beyond just the technically skilled. Following an expansion of the open data team and resources, the city stepped up its efforts in recent months, launching a new, more user friendly website this spring and helping to organize an inaugural open data week to complement Code for America brigade BetaNYC’s School of Data event, including a street tree workshop in collaboration with the Parks Department.

The city’s approach has also included in-person updates from the open data team at Civic Hall in Manhattan. The first, in May, doubled as the departure announcement of Mashariki.

?BIG thanks to #nyc #OpenData for a great update, and to @FactorPrism @RentHop+@MLTobin‘s Brownsville Partnership for showcasing their apps! pic.twitter.com/eBLzi4mXeN

A more recent sold-out event on July 19 marked the occasion of this year’s open data plan. In addition to the usual listing of planned open data releases, the city shared extensive documentation of the city’s open data outreach to different types of users.

“The thinking of tying these two pieces together was more than just an aesthetic and design choice, but really reflects an evolving way that we’re thinking about the program as a whole,” Craig Campbell, special advisor at MODA, told the audience at the Civic Hall event.

He also noted that one “risk of saying ‘open data’ for all is open data for nobody in particular.” He described how the city has undertaken a “deep dive” to understand the open data userbase.

“Not all New Yorkers need to be using open data,” said Campbell, “but it’s our hypothesis that while 140,000 monthly users is a great start, there’s a whole lot more could be inspired to use open data.”

You can watch video of New York City’s open data update in the Facebook video embedded below.

City agencies overseen by New York Mayor Bill de Blasio — who is up for reelection this year — aren’t the only ones making significant open data moves.

The city partnered with social impact firm Reboot, which also helped design this year’s new progress report, to conduct a broader study of open data user types in the city and how to engage them.

Similar to the way Reboot’s research identified different “user personas” who are either current heavy or potential open data users, the progress report profiles actual open data users such as a data scientist at a real estate platform or an advocate for the homeless in Brownsville, Brooklyn. Members of the public are invited to provide feedback on the report or share their own “open data stories” until September 1.

“We’re looking to make open data an initiative that isn’t just about data but a data-driven initiative,” said Adrianne Schmoeker, director of civic engagement and strategy at MODA, at the Civic Hall event. Schmoeker is focused, especially, on reaching the “open data curious.”

She also highlighted some of the new city datasets of the 165 released over the past year, like real-time traffic speed data now available in more user-friendly format, building certificate of occupancy data, and raw aerial imagery going back to 2012. That data serves as the basis for “NYC Then & Now”, a new Web application that lets users compare aerial views from 1924 to 2016.

At the Civic Hall event, MODA intern Handong Park shared his analysis of which agencies saw data demand and what data the public was seeking. Park found that the requests were spread out across around 50 agencies, with the most sought-after data sets were from the Department of Buildings, the Department of Transportation, the Department of Health and Mental Hygiene, the Taxi and Limousine Commission, and the Department of Information Technology and Telecommunications (DoITT).

Another approach the city has taken to improving communication with users was the launch of a dedicated Screendoor platform to respond to data requests this spring, leading to a 367 percent increase in inquiries.

What’s next in New York?

The next opportunities to hold the city’s open data efforts accountable could take several forms.

There will likely be a fall City Council oversight hearing, and later this year 2017 findings from a new, legally mandated investigation of agency compliance will be released for a second year, this time focusing on the Department of Buildings, the Department of Environmental Protection, and the Fire Department.

Transparency advocates praised the progress made to date, but are already looking beyond the 2018 deadline.

“The last few years have been a grand challenge,” Noel Hidalgo, executive director of BetaNYC, said, in a message on Twitter.  “We’re really excited to develop new municipal partnerships and programs. We’re would love to see a public right of action and more robust provisions that make the law live on longer than 2018.”

John Kaehny, executive director of Reinvent Albany, endorsed the additional resources and efforts to address usability and feedback problems in an email, but added that many agencies appear to be “dragging their feet” and don’t always recognize the benefit of open data.

Kaehny also noted that the city could do a better job at making clear how well agencies are meeting their targets, how they are incorporating newer amendments to the open data law, including improving a provision aimed tying open data requests to Freedom of Information requests.

“Without the energetic prodding of the Mayor’s Office and DOITT Open Data Team the open data effort would probably grind to a halt fairly quickly,” he wrote.

“In other words, open data is partially institutionalized but has not yet been assimilated into the workflow and thinking of city agencies. To this end, a very large number of datasets are scheduled for release in late 2018 — the last few months of the original Open Data Law. To us, this is akin to a kid telling their high school they will turn in all four years of their homework on the last day of their senior year. Who would believe that?”