The Sunlight Foundation has supported the DATA Act since its inception and we are thrilled to see the latest round of government oversight reports validate meaningful progress and highlight where agencies have room to improve. The DATA Act is unique in the federal government. It is the only data standard that works across government, getting it up to speed is a monumental task. Initial expectations for DATA Act implementation were modest with incomplete reporting and data quality issues anticipated. We’re glad to see that progress to date has exceeded that reference standard.

On Wednesday, November 8th, the U.S. Government Accountability Office (GAO) released its first government-wide review of the DATA Act implementation. At the same time, agency inspectors general released their reports on how well individual agencies are complying with the mandates of the landmark transparency law. The IG reports, published on the new Oversight.gov,  provide useful insight into specific issues that  agencies are facing as they work to comply with the DATA Act.

Overall, the GAO found that all 24 agencies covered by the Chief Financial Officer Act (CFO Act), which were required to submit data under the DATA Act, met the May 2017 deadline outlined by the law. Beyond this core group, a total of 78 agencies began to submit standardized spending data in May, significantly more than required by law.

This is a good sign that agencies are engaged in the process and working with the Office of Management and Budget (OMB) and the Treasury Department, both of which have devoted resources and attention to implementing the law.

The GAO report also identified a range of issues with the completeness and accuracy of data being submitted, however, along with inconsistent use of several data elements, and problems with presentation on Beta.USAspending.gov.

These issues identified by GAO were not unanticipated, but they are vital for agencies to address, as are any problems that individual IGs discover. For instance, the Housing and Urban Development Department’s Inspector General found in a review that HUD is falling behind on implementation of the DATA Act. 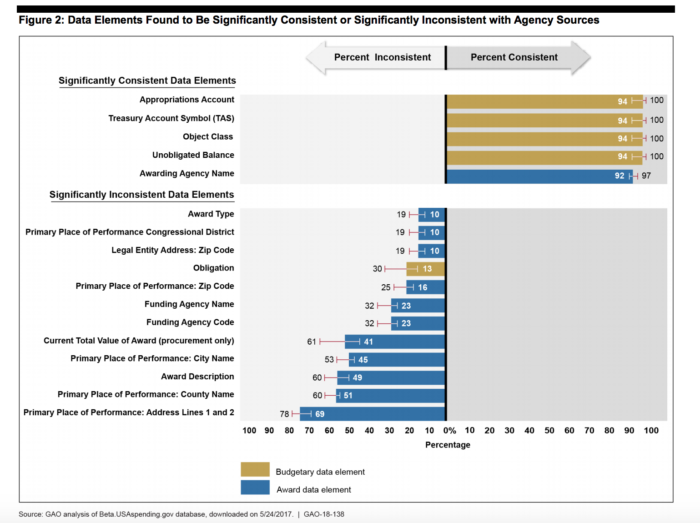 Above: a graphic from the GAO report showing the consistency (or inconsistency) of various data elements.

As more of these data quality issues are addressed federal agencies, we expect the American public will begin to see the value from the DATA Act. More available, useful, and accurate federal spending data will allow Congress, journalists, watchdogs and the public to all participate in public oversight of government contracts, like the questions raised about contracts awarded for reconstruction in Puerto Rico.

This GAO report marks a significant moment for DATA Act implementation. Its findings add to our optimism for the law’s future. Treasury and OMB have embraced an iterative approach to implementation and “generally agreed” with GAO’s recommendations, a good sign that current deficiencies in implementation will be addressed.

Further, while the DATA Act has always been a bipartisan initiative, the Trump administration, lead by OMB Director Mick Mulvaney and the White House Office of American Innovation, have publicly made DATA Act implementation a priority. While our concerns about open government across the federal government remain significant, Mulvaney and senior White House officials have demonstrated a commitment to the DATA Act and open data for financial transparency.

This combination of oversight and support gives us more confidence that the DATA Act will thrive across administrations, regardless of politics. Members of Congress from both major political parties have continued to stay engaged with the DATA Act, providing it a cross-branch boost.

We expect Treasury and OMB to take this GAO report seriously and work to implement its recommendations. One GAO recommendation in particular — that Treasury more fully disclose known issues affecting data quality to Beta.USASpending.gov — can and should be implemented right away.

We’re glad to see continued oversight of DATA Act implementation and will keep our eyes open for improvements in the future.