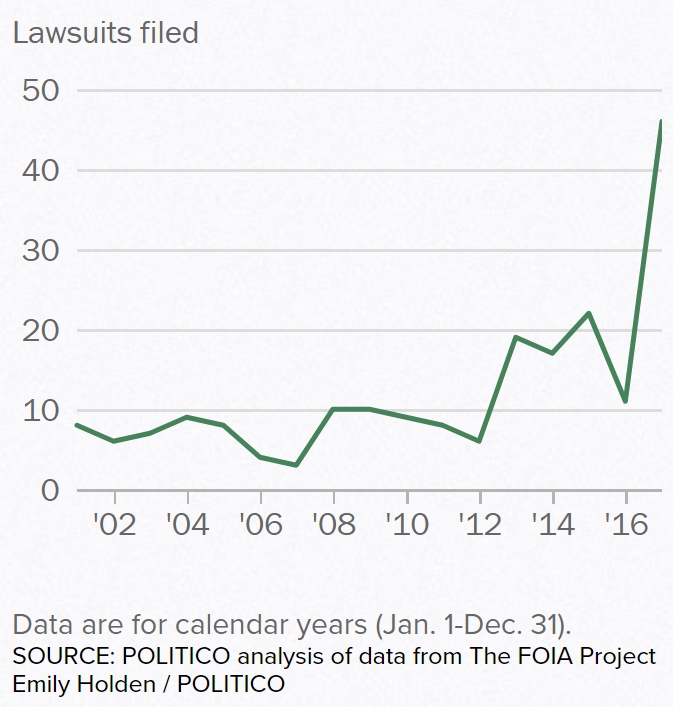 Independent analyses of federal data show that there has been a significant increase in public records lawsuits against the Environmental Protection Agency (EPA) during Administrator Scott Pruitt’s tenure – and that the nation’s top environmental regulator has not responded to the vast majority of public records requests that it has received in the last year.

On February 26, the Project On Government Oversight (POGO) released a preliminary analysis by its director of investigations, Nick Schwellenbach, and me, in my capacity as an advisor to POGO, that documented EPA delays in responding to public records requests.

POGO’s analysis was in coordination with a Politico review of data compiled by The FOIA Project that found that FOIA lawsuits have more than doubled since the Obama administration, with 55 public records lawsuits filed against the EPA since Inauguration Day in January 2017. The FOIA Project is operated by Transactional Records Access Clearinghouse at Syracuse University.

Taken together, these analyses confirm the EPA’s evasive behavior regarding FOIA requests, which comes during a period of secrecy, censorship, and lack of transparency for the Agency under Pruitt’s leadership. His schedules and travel records have not been possible to obtain, except through lawsuits, while his predecessors’ were regularly proactively disclosed and made accessible to the public. To veil his day-to-day activities, Pruitt built a soundproof compartment in his office, at considerable taxpayer expense, and instructs his staff not to take notes in certain contexts.

These behaviors have brought even further attention to Pruitt’s office, which in turn have resulted in even more FOIA requests. The dynamic is compounding the numerous allegations and instances of misconduct by Pruitt and his staff that have been the subject of heightened interest by investigative journalists and watchdogs. In fact, while POGO’s analysis shows that EPA as a whole has only seen a 17% increase in FOIA requests during the Trump administration in 2017, the EPA Administrator’s Office has seen an increase of 400%.

POGO’s analysis does indicate, however, that because many of the FOIA requests to Pruitt’s office are for overlapping sets of records pertaining to these charged topics, the increase in overall FOIA-processing burden may not be as great.

During the same period, there has been a drastic difference in the rate of response from different parts of the Agency. POGO’s analysis shows that while 79% of all requests to EPA were closed during this time, only 17% of requests routed to the Office of the Administrator were closed, which includes the many requests that were closed without any responsive documents being provided. 928 of 1,181 of those requests have not even passed the “Assignment” phase and begun to be processed.

Eric Schaeffer, the executive director of the Environmental Integrity Project, told Politico that he sees EPA’s delays as tactics intended to hamper the FOIA process. “I think the idea is make it take a long time. Why would you do that? Maybe that will result in fewer requests and less disclosure and maybe [they will] be out of here before some of this stuff starts turning up.”

In part because of this low response rate, FOIA litigation against the EPA has risen sharply. Politico’s analysis of The FOIA Project’s data shows that the 55 lawsuits during the Trump-era far surpass 2015, the year with the next highest number at 22 FOIA lawsuits. For comparison, the EPA was only the subject of 57 FOIA suits during all eight years of George W. Bush’s presidency.

The significant increase in FOIA lawsuits isn’t surprising, given the low response rate for requests seeking documents, which often pertain to allegations of secrecy and ongoing misconduct. Politico’s analysis demonstrates a trend of environmental and good government groups that have been unable to get responses without filing suits.

Some of this isn’t new. FOIA responses from the EPA and across federal agencies have been challenging for requesters and slow for years, across administrations. That said, the delays under Pruitt have reached a historic crest. Suits have also been filed when EPA has said it’s unable to provide any responsive documents or has required stringent search terms before it was willing to process a request.

When considered in this context, the news reported yesterday that the EPA is merging three offices – which will result in a restructuring of its handling of FOIA –  is alarming.

Despite the delays that have persisted, FOIA has been used by journalists, civil society and the public to make important discoveries, from uncovering Pruitt’s dealing with past corporate contacts while leading the agency to documenting his personal involvement in the takedown of the EPA’s climate change website.

At a time when the EPA is engaging in levels of secrecy not seen in years, the Freedom of Information Act remains one of the most important tools that the public has to learn about the work of its government and understand, in the EPA’s case, if it is truly working to protect public health or failing to do so. Congress should exercise its oversight authority to ensure that the agency is meeting its responsibilities to uphold the rights of the public to access public information.

Andrew is a Special Environmental Advisor to the Project On Government Oversight and has made financial contributions to POGO, which are being applied to facilitate investigations of environmental agencies.