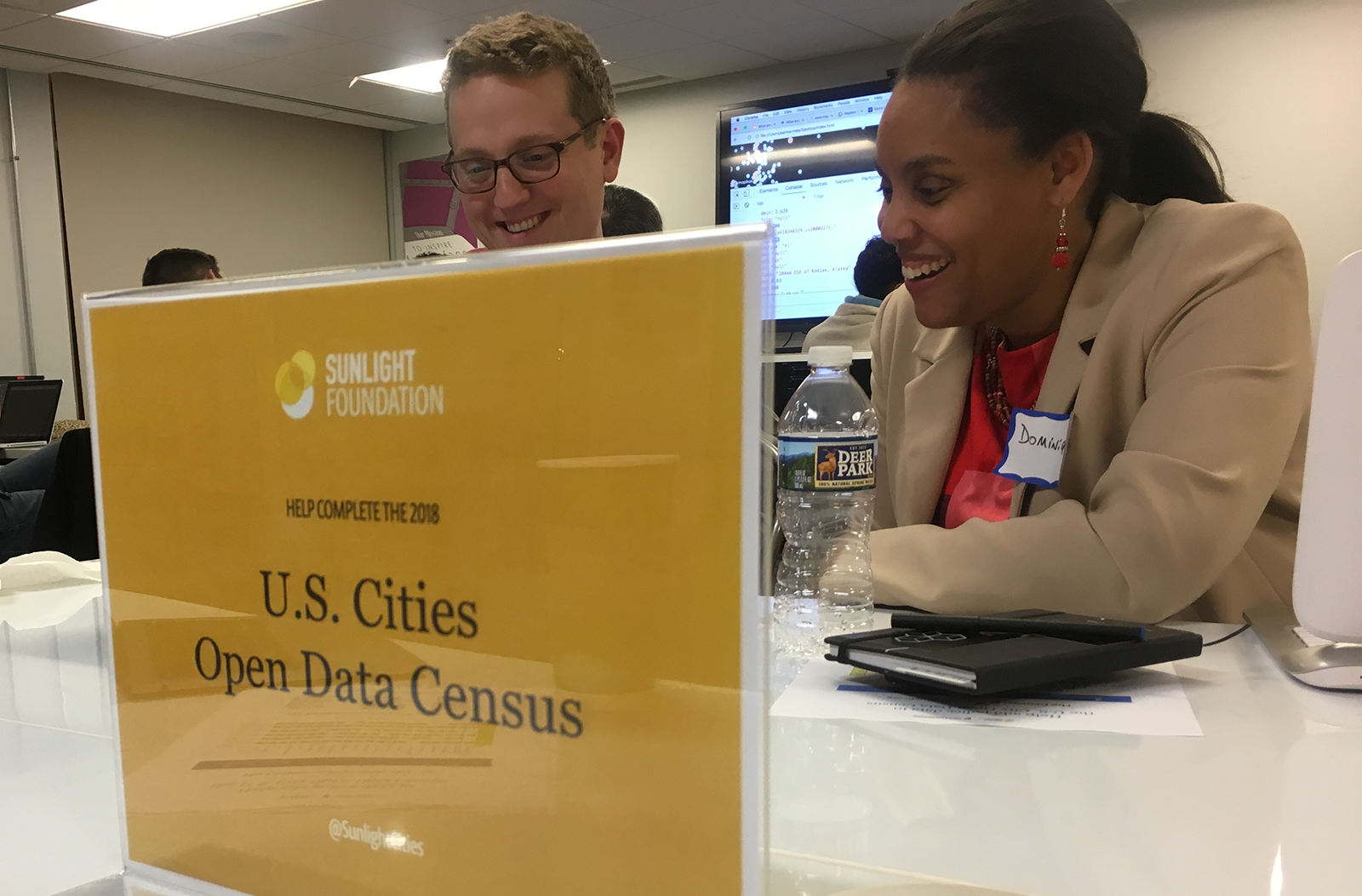 Participants at Code for DC’s March meeting add Police Data Initiative information to the U.S. City Open Data Census.
The following is a guest post from Julia Billings, Policy Analyst at the Police Foundation. Sunlight was an original partner on the Police Data Initiative when it launched in 2015, and since then we’ve written about the evolution of police data. Now we’re excited to incorporate this important work in the 2018 U.S. City Open Data Census.

Open police data can encourage joint problem solving, enhanced understanding, and accountability between communities and the law enforcement agencies that serve them. That’s the mission of the Police Foundation‘s Police Data Initiative (PDI) and we’re excited to join the Sunlight Foundation in 2018 to empower communities across the nation and share the importance of releasing open police use of force data as part of the 2018 U.S. City Open Data Census.

PDI is built on the principle that open data is a powerful tool to enhance the co-production of public safety. We work with law enforcement agencies of all sizes and types across the country to release data on things like calls for service, incidents, complaints, officer-involved shootings, as well as police use of force, one of the datasets that’s new on this year’s Census. Earlier this week we came together with Sunlight and Code for DC to evaluate police use of force data as part of the 2018 Census.

The inclusion of use of force data — sometimes also referred to as “response to resistance” data — in the Census is an important step to highlighting the efforts cities are taking to ensure citizens and police are having informed discussions about use of force in their communities. Releasing open use of force data can be an important communication tool for departments.

When data is open, community members are empowered to assess the data directly. Releasing open data is more than a gesture of goodwill and trust on behalf of law enforcement agencies; it is a shrewd use of resources and a means of enlisting communities to solve some of their most entrenched crime problems. As such, it is a key component in the co-production of public safety. To date, 139 agencies are part of PDI and collectively they have released more than 322 datasets openly.

In addition to open use of force data, we’re also working with agencies to release open hate crime data. Although it is not currently part of the U.S. City Open Data Census, we believe hate crime is an issue that communities and police must work together to address. In recognition of this, the Police Foundation has asked law enforcement agencies across the country to commit to releasing open data on hate crimes. This challenge will run until the end of March 2018, when the Police Foundation hopes to reach the goal of 50 U.S. law enforcement agencies releasing open data on hate and/or bias crime. To date, 31 law enforcement agencies have committed to releasing open hate crime data to engage the public and promote mutual accountability. As we continue to promote the release of open police data, including use of force and hate crime data, across the United States, we ask residents to encourage their police departments or elected leaders and ask them to take up the challenge and join the network of local leaders working to further the safety and well-being of their communities.

Transparency is an essential catalyst for change. With increased access to accurate information around issues such as use of force and hate crime, police officers and community members alike are empowered to develop fact-based solutions to local problems. We’re excited to collaborate with Sunlight to show which cities are excelling at this, and to help others follow suit.