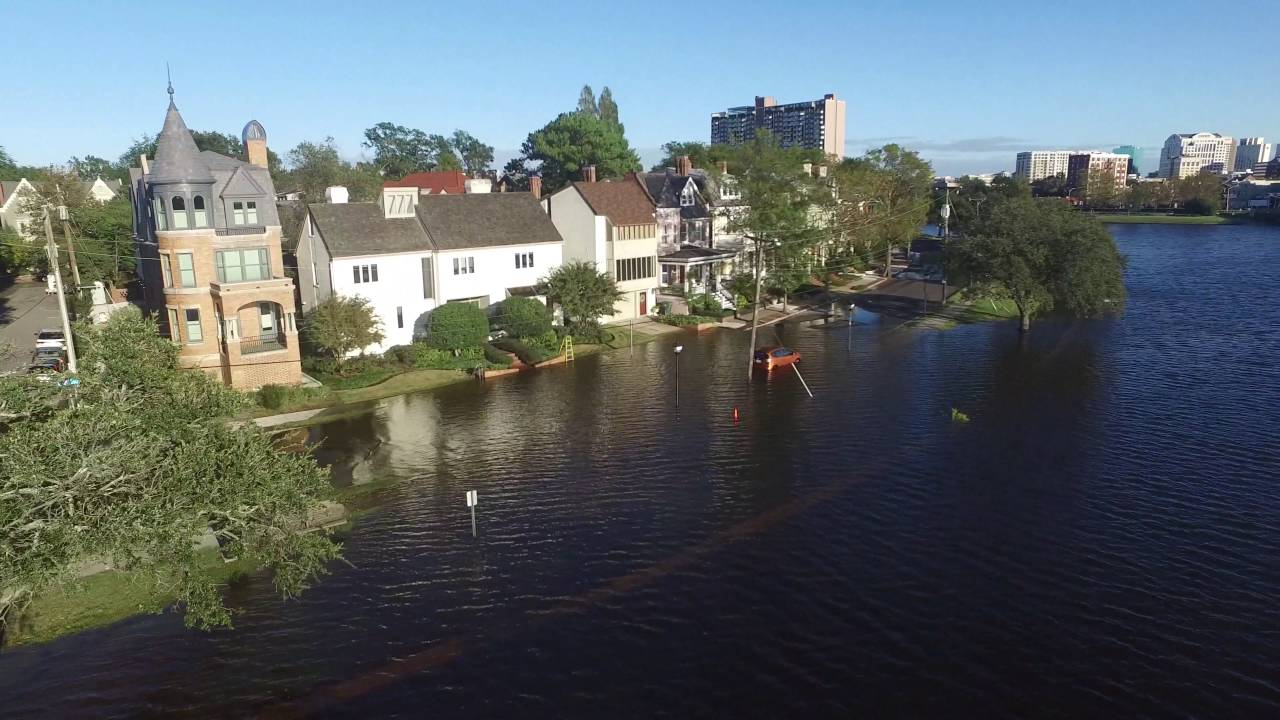 Flooding in Norfolk after Hurricane Matthew in 2016. Image via the Norfolk Department of Emergency Management. Information about flooding events is one of the datasets available on the city’s new open data portal.

Norfolk, VA is a waterfront city that’s home to the world’s largest naval base, and in the 350 years since its founding, Norfolk has grown into the economic and cultural hub of the region known as Hampton Roads. In recent years development has revitalized Norfolk’s downtown and attracted thousands of new jobs.

Norfolk’s history, location, and economic growth are both assets and challenges. The city has seen cycles of development and redevelopment that have created pockets of concentrated poverty, and sea-level rise and subsiding land create areas of frequent flooding. Norfolk seeks to address these challenges through the framework of resilience, to help the city live with water and offer economic opportunity for all in ways that support strong neighborhoods.

One way Norfolk is building for a more resilient future is with a new open data program. In March we selected Norfolk to pilot Tactical Data Engagement. Here’s where we started on that work, and where we are planning to go.

Norfolk is at the beginning of its open data journey
Norfolk’s work with open data began in 2016, when it was selected to participate in What Works Cities. Sunlight’s Open Cities team worked with Norfolk back then to develop an open data policy, and that policy eventually helped the city begin a formal open data program, according to Pamela Marino, Norfolk’s Management Services Administrator and open data program lead.

“We were really starting from scratch,” said Marino in a phone interview. “We had to get our policy together, get our elected officials on board. It was wonderful to have Sunlight down here because they were passionate. It’s sometimes hard to get a program off the ground because you get caught up in things like who we’re going to invite, who’s coming to these meetings and Sunlight helped bring the passion and excitement behind open data.”

In July 2017, the city passed its open data policy, and in March launched its first open data portal. Although still in its infancy, the datasets available on the site include boundaries of neighborhood associations, calls to the “Norfolk Cares” community hotline, employee salaries, building permits and inspections, crime, flooding, and restaurant inspections.

Marino and her team had already begun to consider how to make city datasets useful to community members. “I went to the What Works Cities seminar last year where Sunlight was leading a few sessions about community engagement. My background is in communications and management, so I gravitated to those sessions and just found it fascinating about how to get the community involved. It’s one thing to have a portal. It’s another thing to get the community to use it.”

When they learned about Tactical Data Engagement, Marino and her team viewed it as a way to introduce the open data portal to residents and improve it with their help. “It’s going to give us a structured way to think about engagement around the portal. To say hey reporters, hey researchers, hey community, come see what we have and see how to use it.”

Facing the challenges of flooding and displacement
Norfolk has dedicated significant resources to finding solutions to two major challenges: flooding, and the redevelopment of public housing to alleviate concentrations of poverty within the city.

Norfolk’s proximity to and dependence on the water means that it must address the factors that cause flooding. The city and local higher education institutions have devoted significant resources to study how the city lives with water, and bring residents into the process of finding a solution.

Meanwhile, Norfolk has begun to consider how best to redevelop an area known as St. Paul’s, which includes three public housing projects that date to the 1950s. Residents of the area are deeply concerned about displacement as those plans move forward. City council members have asked city staff to hold public forums, to gain the insight of those who would be most affected by these changes.

As the city addresses these challenges and grows its open data program, staff are looking for ways that each can inform the other. “When we applied for the pilot, we thought we could use the open data portal to get citizens involved and in helping inform decisions in how we address these two things,” Marino said.

Why we selected Norfolk as a Tactical Data pilot
We liked many things about Norfolk’s application to be a Tactical Data Engagement pilot city. Chief among them was that open data has the city’s attention. In its application and subsequent discussions, we found the city was willing to devote time and effort from decision makers inside City Hall to make the most of its open data program. For example, representatives from several city departments as well as the Mayor’s Office joined our initial calls as we were considering applications.

We found Norfolk’s commitment very promising because at this beginning stage of a city’s open data program, Tactical Data Engagement can help shape how the city approaches open data and open government in general. And since it’s a new initiative that the city is investing in, both in terms of dollars and people, finding ways to make it responsive to community and user needs can help it resonate throughout city government.

The focus on open data is also reflected in how Norfolk views it as an internal resource. Marino noted the city sees significant potential in using open data to help city staff do their work, and has helped build capacity for city staff to utilize this new tool.

“We’ve really been pushing internal communications and training on open data, and staff are excited about it,” said Marino. “We’ve actually had a problem with overflow for our most recent trainings.”

Finally, this work dovetails with the city’s broader efforts at transparency and engaging residents. Norfolk uses Open City Hall, an online platform developed by Peak Democracy, to facilitate open discussion with residents about issues. The city also publishes information about expenditures and city programs, and the Mayor and City Council members have included transparency and accountability principles in the city’s stated goals.

Where we’re headed from here
Tactical Data Engagement aims to provide a city with both specific strategies as well as an overall approach to intertwine governance and engagement.

In Norfolk, we’re currently wrapping up the FIND stage of the process, where we will identify a FOCUS AREA that will be target of the future open data intervention. From here, Sunlight and the city will engage stakeholders to assess their information needs and co-design the intervention the city will employ during the IMPLEMENT phase. Norfolk has displayed all the qualities of a city ready to deploy open data by engaging users.

As we begin this TDE journey, we’re excited to see what comes and look forward to sharing it with you.