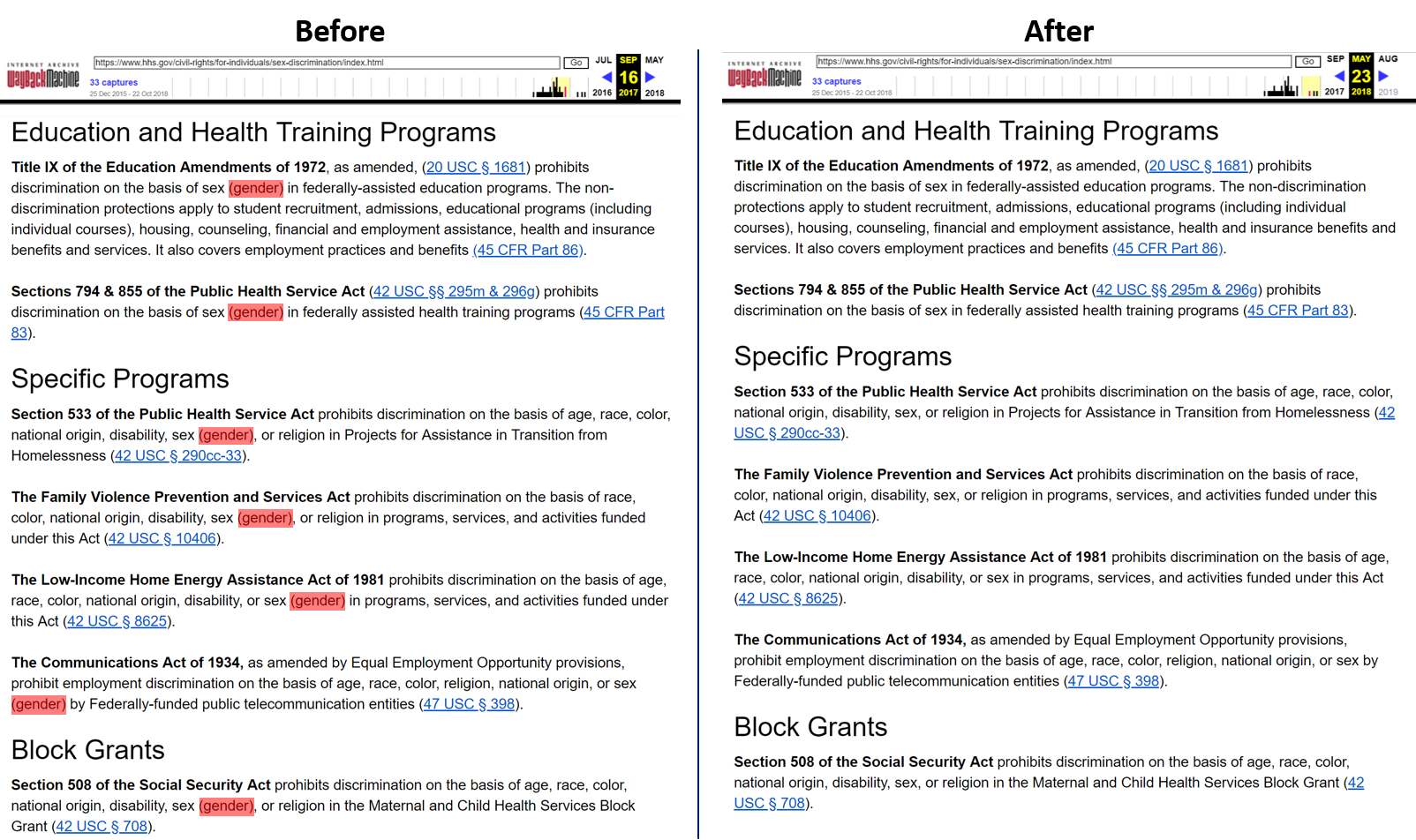 A side-by-side comparison of a portion of the September 16, 2017 and May 23, 2018 versions of HHS’s “Discrimination on the Basis of Sex” page, as captured by the Internet Archive’s Wayback Machine. This change occurred between February 26, 2018 and March 5, 2018, according to WIP’s website monitoring software.

In a series of unannounced changes since spring of 2017, the Department of Health and Human Services (HHS) removed language pertaining to sex discrimination protections, including mentions of “gender,” from its Office for Civil Rights (OCR) website.

These changes preceded reporting by The New York Times on October 21 that revealed that HHS has circulated a memo that aims to legally redefine gender as an immutable trait determined by one’s genitalia at birth. This definition would impact how OCR oversees Title IX’s prohibition on sex discrimination in educational programs receiving federal financial assistance.

The changes that the Web Integrity Project reports on often help explain the news; in this case, however, the news instead provides insight into the changes we’ve seen. The memo described by The Times represents a formal initiative from an agency that provides a rationale for why the government might seek to alter the description of policies about sex discrimination on a public-facing website.

These changes occurred following the December 2016 issuance of a nationwide injunction that prohibits OCR from enforcing Section 1557 provisions relating to gender identity and termination of pregnancy. Experts told WIP that the documented changes to the OCR website appear to remove more content regarding discrimination prohibitions than what would be necessary to comport with the injunction.

On June 25, HHS filed a status update to the court that issued the injunction, stating that it is “reevaluating the reasonableness, necessity, and efficacy of the Rule that is challenged in this case” and asking the court to maintain the injunction. The rule being suggested by HHS, the text of which is not yet public, might roll back all or part of the current 1557 regulations, including the prohibition of discrimination on the basis of gender identity.

While changes in language and content on federal websites do not always indicate underlying shifts in policy, censorship of key terminology, especially when paired with news of an agency initiative as in this case, can illuminate an attempt by the government to influence the public’s understanding of policy matters that are currently under debate. Information must, of course, be updated when appropriate processes are followed to put new policies in place or when new research conclusions are obtained. Our government should not, however, alter public-facing information in order to further its own political agenda.