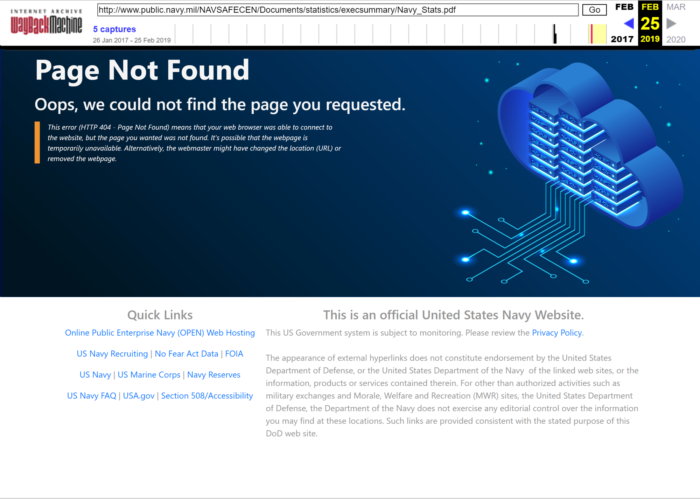 A snapshot of the removed “Navy Statistics” page showing the “Page Not Found” notice its URL returned on February 25, 2019. Snapshot captured by the Internet Archive’s Wayback Machine.

Today the Web Integrity Project (WIP) released Gov404: The Web Integrity Project’s Censorship Tracker. Gov404 is a new tool tracking removals of online resources and reductions in access to content on federal websites, uncovered through our work and the work of others. We hope Gov404 will be a useful resource for researchers and journalists exploring how the federal Web is being altered, sometimes in response to policy shifts, and sometimes not. We’ve highlighted some of the most important trends we’ve found in our Gov404 release post.

To be included in Gov404 in the first place, a change must be significant. Minor language alterations don’t make it into the Tracker, and we only document content removals or reductions in access which go beyond articulated policy changes.

As part of the release, we’re highlighting three findings that we think do a particularly good job of demonstrating Gov404’s utility. In addition to collecting and aggregating reported changes, Gov404 is valuable as a resource that supplements already existing reporting. Items listed in the Tracker might: 1) add granular detail to reporting another organization has done; 2) expand the scope of reporting by another organization; or 3) document unreported changes. Read on for a specific example from each category.

The twelfth change included in Gov404 deals with a story that appeared in The Atlantic late last year, in which filmmaker Jason Paladino provided a great overview of the Navy’s decision to remove public access to important Navy accident and safety data. As Paladino explained, the altered page, which provided links to the data in question, was an important resource for him as he researched a documentary about the safety record of the 53E helicopter, which he described as “the deadliest aircraft in the U.S. military.” He had access to the statistical information throughout his reporting, until it was abruptly put behind a secure login and restricted to users with military credentials.

Paladino’s writeup drew attention to an important reduction in information access. In Gov404, WIP has added to the reporting, and contributed a little extra to the discussion about the change, by providing some more of the granular, technical details. We used the Internet Archive’s Wayback Machine and other tools to determine, for example, that the page in question was changed between January 22, 2018 and March 18, 2018. We also verified the changes Paladino described and documented precisely how the text and links on the page changed.

Providing more detail is one way WIP can build on the reporting of others. Another way is to expand the scope of the reporting, and potentially find other materials that have been removed or changed from the same or related domains.

Following CNN’s reporting, WIP assessed the DOT website and found that a third page about climate change had been removed. WIP has also provided additional information about changes to climate change content on the DOT website. While CNN’s report gave a detailed, specific timeframe of the removals, noting that the pages seemed to have been taken down “on October 3 or 4” of 2017, the report didn’t touch on an earlier overhaul of the DOT’s climate change website. As we described in the 35th item in Gov404, which describes the overhaul of DOT’s “Transportation and Climate Change Clearinghouse” website,” DOT retired its https://climate.dot.gov website sometime in March or April of 2017, moving less than half of the website’s 46 pages to a new website. This overhaul happened several months before the removals mentioned by CNN — and the removed pages CNN documented were among those that were relocated. By revealing the full extent of the alterations, and expanding the scope of the reporting, we hope that we can help provide some context to the good work done by CNN.

WIP’s own research uncovered many of the changes in Gov404. Some of these removals, significant though they are, haven’t gotten widespread attention or made it into a WIP report. The 25th item in Gov404, which details the removal of pages related to minority women’s health from the Office on Women’s Health (OWH) at the Department of Health and Human Services (HHS), is an example of this third category.

In Gov404 we detail this change, showing that the removed pages were related to specific diseases and conditions and how they affect various racial minorities. At least 17 such pages — an entire website within the OWH’s main site — were removed. Some of that material was incorporated on other pages, but much of it was not.

These removals didn’t become part of a WIP website monitoring report, but they still add to the aggregate knowledge about how the federal Web is changing.

WIP will continue to add items to the Tracker as we learn about new changes to federal websites. By contributing our own findings and verifying and building on the reporting of others, we think this project will be a valuable resource for many years to come.