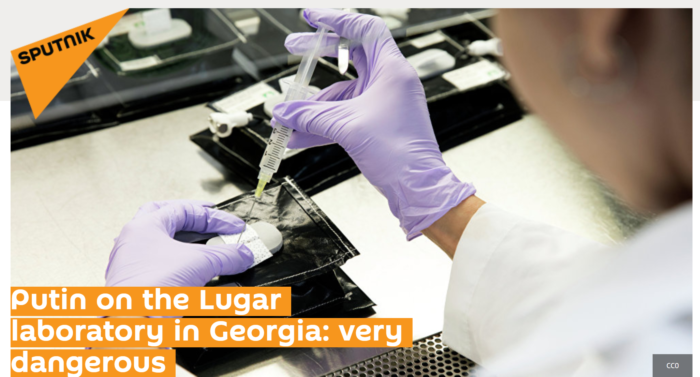 An example of disinformation about the Richard Lugar Public Health Research Center, a joint US-Georgian health facility, from Sputnik, a Russian media outlet.

Giorgi Revishvili discusses the issues of misinformation and disinformation. Revishvili is a fellow at the Sunlight Foundation participating in the Professional Fellows Program, which is funded by the U.S Department of State and operated by the American Councils. Hailing from Georgia — the country in the South Caucasus, not the U.S. state — he works for the Ministry of Internal Affairs in the International Relations Department. Previously he was a researcher at the Media Development Foundation, specializing in Russian disinformation and conducting media literacy trainings. He has BA and MA degrees in International Relations from Ivane Javakhishvili Tbilisi State University. The opinions expressed in the blog are solely his and do not represent official views of the Ministry or any other organization.

On my first day as a fellow at the Sunlight Foundation, I was eager to learn as much as I could about the Web Integrity Project (WIP) and its web monitoring processes. WIP strives to hold government accountable by revealing changes and reductions in access to information on U.S. federal government websites. In the month that I have been here, I have learned about the tools the WIP team uses to monitor changes on government websites, how U.S. agencies provide information to the public, what kinds of shifts in that information the WIP team has seen, and the web governance recommendations that the WIP team has developed.

I wanted to work with WIP for my fellowship because I believe that, unless the rising trends of mis- and dis-information on the internet are managed, they will negatively affect the rule of law, the justice system, and good governance in democracies across the world. 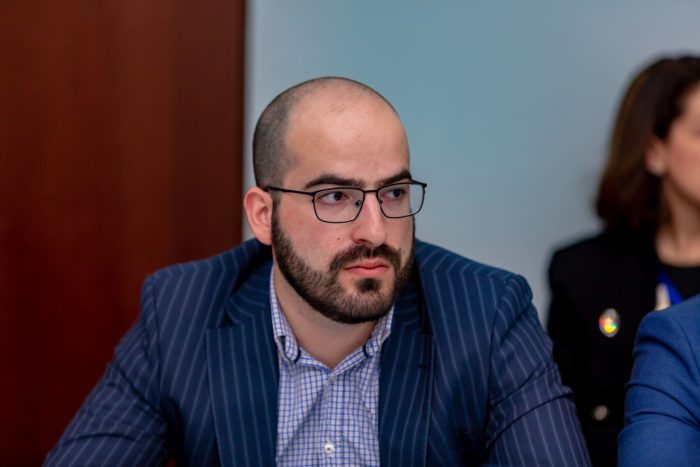 Professional Fellow, Giorgi Revishvili, who has been working at the Web Integrity Project for the last month.

Mis- and dis-information are huge challenges for democracies around the globe. Increasing media literacy among citizens — and encouraging people to be cautious and verify stories — are key to combating these challenges. In addition, we need to ensure that high-quality journalism prospers and fact-checking organizations keep outlets and politicians accountable. And we need to make sure reliable information sources are readily available for citizens to consume.

WIP is dedicated to making sure federal government websites are one of those reliable source of information. WIP believes that, as part of any campaign to educate people about “fake news,” we should be able to say that a .gov (or .gov.ge) URL means the information is objective and accurate.

We hear terms like “misinformation” and “disinformation” regularly, but they are often presented in confusing and vague ways, and sometimes even subject-matter experts use them interchangeably.  But a clear distinction has to be drawn in order to better understand — and respond to — both phenomena.

By contrast, disinformation is the deliberate dissemination, by state or non-state actors, of fake news or propaganda in order to create desired effects. Though less common since the end of the Cold War, disinformation has emerged again as an issue around the world. A quite novel phenomenon for the U.S., disinformation rose to prominence after 2016 Russian interference in the U.S. elections. But Russia’s near neighbors, such as Georgia, have much experience with disinformation.

Not only in Georgia, but in most European countries, Russia’s most common and potent weapon is disinformation. By financing and supporting various media outlets, it tries to weaken the internal cohesion of democratic societies, to strengthen skepticism about integration into the European Union and NATO, and stimulate pro-Russian discourse.

One particularly deliberate example of disinformation comes from Georgia. Russian media and senior officials, including Vladimir Putin, frequently spread disinformation about the Richard Lugar Public Health Research Center, a joint US-Georgian project initiated by Sen. Richard G. Lugar and managed by the National Center for Disease Control and Public Health of Georgia (NCDC). Russian media claimed that Americans and Georgians jointly conducted experiments on humans and created bioweapons and dangerous viruses in the Lugar Center, which is untrue. In reality, the goal of the Center is to protect public health by efficiently diagnosing potential viral and bacterial threats on the territory of Georgia, and it shares the results of its research with the international community. The aim of this disinformation campaign was to polarize society about U.S. – Georgia relations and their strategic partnership. 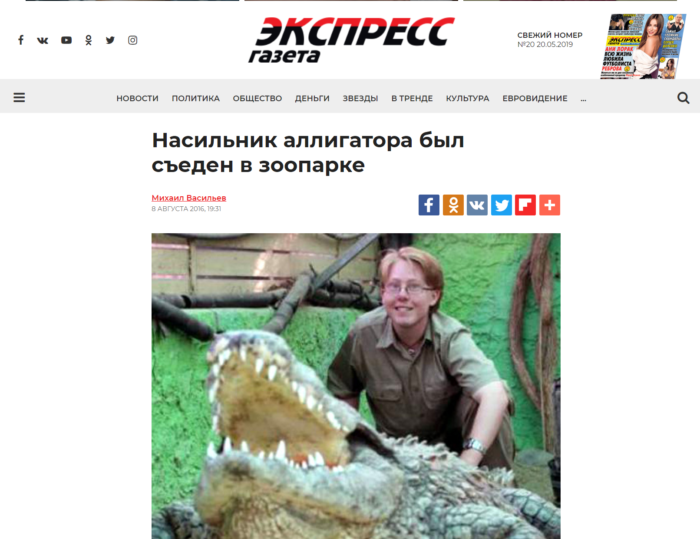 A screenshot from a media outlet that reported the World News Daily Report’s alligator story.

Another purposeful instance of disinformation was disseminated by Russian-language editions of the publications Makataka, Penza Vzglyad, and Express Gazeta, and reproduced on the pro-Russian Georgia and World website (the article has since been removed). The story claimed that an American man was eaten by an alligator while attempting to perform an indecent act upon another alligator. The story originated on a satire website World News Daily Report, which uses the tagline “Where facts don’t matter.”

Russian sources reproduced this piece of disinformation to portray Americans as immoral and indecent. By revealing and debunking such forged stories, fact checking sites play an important role in reducing the influence of disinformation on a society.

The Lugar Center and the alligator stories are but a few examples of Russian disinformation.

If we are to limit the impact disinformation has, in Georgia as in the rest of the world, we need to educate people about media literacy and make sure we are all aware of untrustworthy news outlets. There are many Russian state-owned media outlets dedicated to disinformation, including Russia Today (RT), Sputnik, RiaNovosti, and TASS. Stories from these outlets are widely shared on social media, and many people accept the stories as fact. The public should be cautious and always double check the facts from all sources, but especially the sources listed above.

Useful sources for fact-checking include:

In order to maintain an open and democratic society, we must deal with both misinformation and disinformation. Civil society groups like WIP and fact checkers are an important part of tackling the problem. But most of the responsibility falls upon us. As individuals, we have to be more critical about the information we receive and spread. I believe a lot more has to be done to educate people about media literacy, especially in the case disinformation, because of its hostile nature. Disinformation challenges national interests and vital societal functions. We must be more vigilant to counter it.