Interior removed NativeOneStop.gov, a one-stop shop for Native American resources, and OPA migrated its webinar archive, orphaning most of the old content.

Today the Web Integrity Project is adding two examples of removed resources from federal government websites to our Gov404 Tracker: The removal of NativeOneStop.gov and the reduction in access to webinar content on the Office of Population Affairs (a part of the Department of Health of Human Services).

Gov404 is a tool for tracking removals of online resources and reductions in access to content on federal websites. The Tracker collects cases where the federal government has removed or reduced access to content, which go beyond articulated policy changes and may have generated unnecessary confusion, or obscured information that itself had significant public value.

In May or June of 2017, the U.S. Department of the Interior removed access to NativeOneStop.gov. The website was a “one-stop shop” for American Indians and Alaska Natives to access resources available from the U.S. government. The URL for the site currently redirects to benefits.gov, though benefits.gov fails to provide some of the key functions of NativeOneStop.gov.

NativeOneStop.gov’s core function was an eligibility prescreening questionnaire, known as the “Resources Finder.”  The Resources Finder, a questionnaire that was unique to the site and is no longer available elsewhere, evaluated the answers provided by each user in order to produce a tailored set of resources and programs for which the user was qualified.

NativeOneStop.gov was significant in that it was an online, centralized source of information on the federal resources and programs available to American Indians and Alaska Natives.

Years after the removal of the website, NativeOneStop.gov is still linked from other government websites, including the U.S. Small Business Administration’s “Office of Native American Affairs” page and the Department of Housing and Urban Development’s “Southwest Office Of Native American Programs” page. 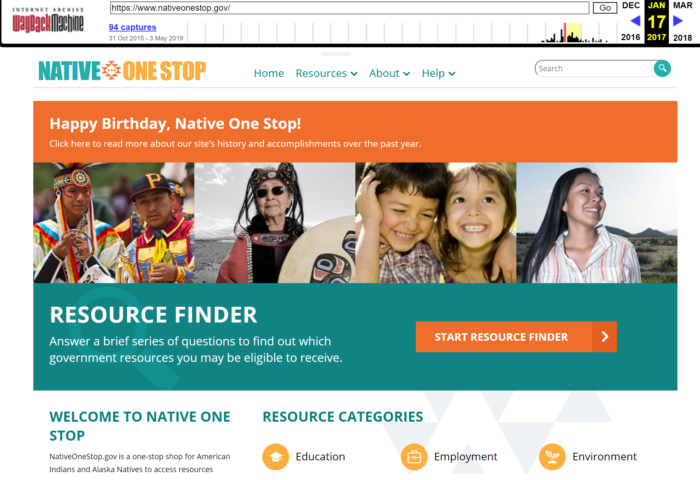 The Homepage for NativeOneStop.gov, a “one-stop shop” for American Indians and Alaska Natives to access resources available from the U.S. government, captured by the Internet Archive’s Wayback Machine. The website was removed May or June of 2017.

In March 2018, the Office of Population Affairs (OPA) moved its “Webinar Archive” to a new URL and, in the process, failed to transfer all the webinars to the new archive page.

Before being moved, the “Webinar Archive” page, captured here by the Internet Archive’s Wayback Machine, contained links to videos and supporting materials, such as slides and transcripts, from at least 28 webinars presented from 2010 to 2015.

Only two of the webinars that were available on the original page are now listed on the new page. The rest of the materials from the old page are now orphaned — the resources are still live, but they are not linked from anywhere else on the site.

Webinars that are missing from the new page include technical assistance for previous Title X grants and a webinar titled, “Meeting the Needs of Refugees in the Family Planning Setting” (see slides here and transcript here via the Internet Archive’s Wayback Machine).

Given that the page was meant to be an archive, it is unclear why these resources were removed and what process OPA underwent in deciding which resources to remove from the page. OPA did not respond to a request for comment. 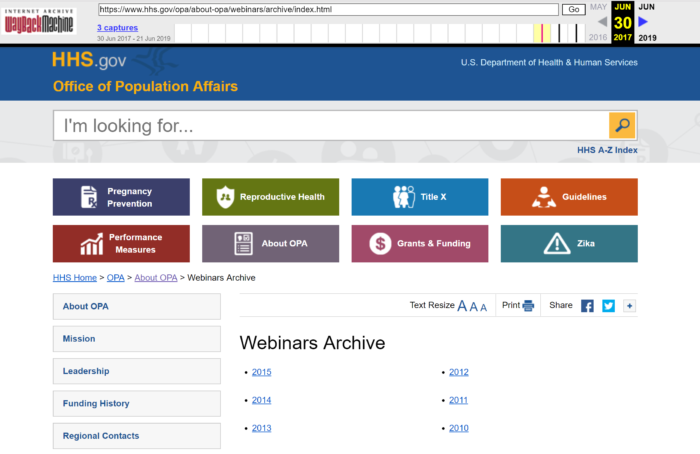 The top portion of the June 30, 2017 version of the original “Webinars Archive” page, captured by the Internet Archive’s Wayback Machine.