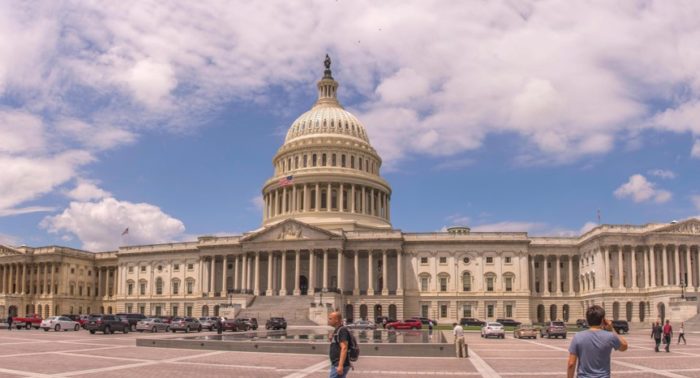 On Wednesday afternoon, the U.S. House of Representatives passed H.R.736, the Access to Congressionally Mandated Reports Act (ACMRA). ACMRA would create a central website, run by the Government Printing Office, that would make all congressionally-mandated reports publicly available within 30 days of their submission to Congress (with exceptions for reports that touch on matters of national security and other sensitive topics). The bill seeks to address the less-than-ideal situation that exists now, in which Congress requires agencies to submit reports about their activities and programs as part of proper oversight, but neither tracks the timely submission of those reports nor requires reports be made public, or even read.

Nobody really knows how many reports federal law requires agencies to submit to Congress each year. The best estimate we have comes from the Clerk of the House of Representatives, who is required to compile a list of congressionally-mandated reports at the beginning of each legislative session. The clerk’s list identifies over 4,000 such reports (though, as we will see, it is not an exhaustive list of congressionally-mandated reports).

It is an open secret that many reports are not submitted to Congress by the date required by statute (or ever). Enforcement is left up to the committees that were due to receive the report. However, committee chairs may not know that a report is due or be paying close attention to whether a report is submitted, on time or at all. Even those reports that are eventually submitted may find themselves ignored, languishing, Schoolhouse Rock-style, on a shelf in a committee office or in an inbox, with their calibri-drenched contents destined to remain unread.

The Web Integrity Project stumbled across the problem of tardy reports firsthand as part of our federal web monitoring efforts. Since December 2017, we have monitored the website of the Office of Minority Health (OMH), within the Department of Health and Human Services. Early this year, we noticed a conspicuous lack of change on the “Report to Congress on Minority Health” page. That page contains links to recent reports to Congress about OMH activities, which OMH is required to file no later than February 1 of each odd year. (Note: the OMH biennial report is an example of a congressionally-mandated report that is absent from the House Clerk’s list.) The report covering 2015 and 2016 is years overdue (it was due by February 1, 2017).

When the Web Integrity Project reached out to OMH spokesperson, Tony Welch, about the 2015-2016 report in late February of this year, he told us that “the Office of Minority Health Report to Congress is being reviewed. It will be posted on the OMH website after it is delivered.” Needless to say, the 2015-2016 report still has not been posted. (Neither has the 2017-2018 report, which should have been delivered to Congress several months ago.) 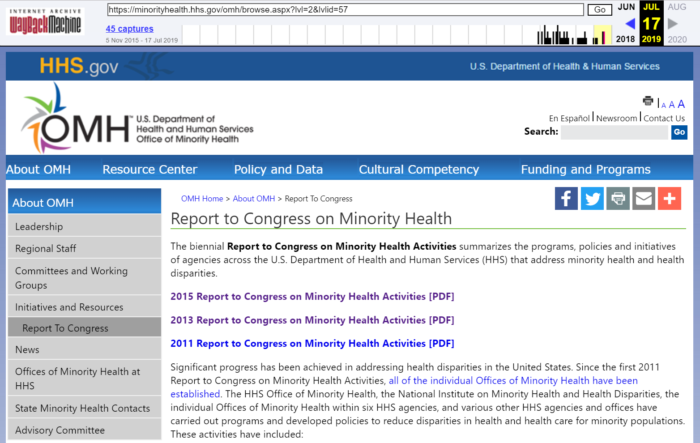 Currently, there is no requirement that congressionally-mandated reports be made public. Committees could choose to post them on their websites, though it rarely happens in practice. Some authoring agencies, like the Office of Minority Health and the Citizenship and Immigration Services Ombudsman, have voluntarily chosen to publish their congressionally-mandated reports on their websites. Being voluntary, there is no consistency across agencies or over time in the practice of posting congressionally-mandated reports. When reports are posted, they tend to find themselves on obscure corners of agency websites, accessible only to the particularly intrepid report hunter. For those reports that are not published online, a Freedom of Information Act request is an option, though such a request requires knowing of a report’s existence.

The requirement that agencies report to Congress is a central part of its oversight role. The reports, if made both public and accessible on a central website, could be a useful way for the public to find out how tax dollars are being spent and hold agencies accountable. Making the reports public and accessible could also encourage agencies to submit better quality reports on time, as well as encourage committee staff to read them closely, thereby improving congressional oversight. It would also end the fool’s errand of writing a report that is not likely to be read.

The Sunlight Foundation was one of 30 organizations that wrote expressing their strong support of ACMRA to the Committee on House Administration last July. We hope Congress will pass this bill.