Confusion, frustration, and irritation could be avoided by adopting four key principles when updating government websites. 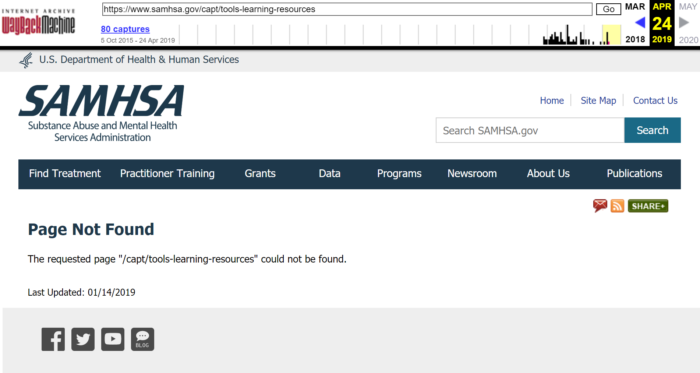 The “Grantee Stories, Tools, & Resources” page from the Center for the Application of Prevention Technologies (CAPT) website as captured by the Internet Archive’s Wayback Machine on April 24, 2019. The page, like many others on the CAPT website, was removed after March 20, 2019.

In our latest report, we explore the web governance failings evident in the recent overhaul of the website of the Substance Abuse and Mental Health Services Administration (SAMHSA), which are likely to have left users confused, frustrated, and irritated by a lack of notice, poor archiving practices, and inadequate redirection of pages.

SAMHSA, the federal agency that “leads public health efforts to advance the behavioral health of the nation,” systematically restructured its website in ways that seem to reflect a shift away from the agency’s decades-old approach to the treatment of mental health and substance use disorders. SAMHSA’s old approach emphasized the “recovery” model of treatment, which prioritizes the role of environmental factors in effective treatment, with particular focus on secure housing, peer support, and counseling. The agency’s top official since 2017, Elinore McCance-Katz, is a psychiatrist and former president of the American Academy of Addiction Psychiatry who has long been associated with a medical model of care, which focuses on biological causes and more fully embraces the use of pharmaceutical treatments.

Upon her appointment, observers widely expected her to reorder the agency’s priorities. And while McCance-Katz has called for a balance between the medical and recovery models, she has also criticized SAMHSA for giving medical interventions short shrift in the past. Some of the bureaucratic restructuring of the agency under her leadership has empowered officials with psychiatric backgrounds, and some funding choices have also suggested an increased role for what might be considered a medical approach.

Whatever the underlying reasons for the overhaul of the SAMHSA website, the overhaul raises serious web governance flags. SAMHSA removed widely-used online databases, collections of resources, and swathes of content without notice or proper archiving, and, in many cases, without establishing useful redirects. Users of the website likely experienced confusion, irritation, wasted time, and frustration as a result of SAMHSA’s overhaul, with much relied-upon content suddenly vanishing without a trace and bookmarked pages returning 404 errors or redirecting to unrelated pages.

The changes, which are documented in detail in our report, include the removal of:

When removing these resources, SAMHSA frequently fell short of web governance best practices. SAMHSA failed to provide proper notice about the removal of NREPP, and left contractors confused and users scrambling. SAMHSA failed to adequately archive resources in RTP, NREPP, and its blog, ensuring that practitioners and grantees who wanted to continue to draw on those resources were unable to do so. SAMHSA failed to provide useful redirects for many of the removed pages in the Topics section of the website, which may have left users frustrated by 404 errors or bemused by why they were redirected to a generic, unrelated page.

SAMHSA did not offer responses to a series of detailed questions, but sent WIP a general statement. “Government agencies regularly update their websites to reflect the priorities of those agencies …” a spokesperson said via email. “SAMHSA is prioritizing people who have serious mental illness (SMI), because they are a population that has been particularly disenfranchised and their needs are substantial. However, we also still promote widely training and education, as well as public messaging regarding mental health in general.”

To minimize the confusion, irritation, wasted time, and frustration of the American people, the Web Integrity Project encourages agencies to adopt four key principles when making changes to their websites.

If these principles, along with the website change guidelines outlined in our report, were followed, it is likely that less confusion, irritation, wasted time, and frustration would have resulted from the SAMHSA website overhaul. Additionally, all of the removed and altered content would still be available for users.

We would like to thank our partners at the Internet Archive’s Wayback Machine. Without them, this analysis would not be possible.