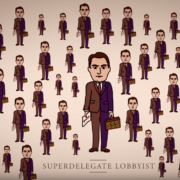 Sunlight has finally made it big on basic cable: Our investigative work tracking lobbyist superdelegates at the Democratic National Convention was featured on "Full Frontal with Samantha Bee!"

What we discovered in our superdelegate research is that lobbying disclosure can vary wildly from state to state, making the already difficult process of tracking influence in America even more arduous.

There are 712 “superdelegates” that will play a role in deciding the Democratic nominee for president. Help us figure out which ones are engaged in lobbying — registered or otherwise.

We've been wondering ourselves about possible money connections between the SuperDelegates and Hillary Clinton and Barack Obama. And from the fast flying computers at the Center for Responsive Politics we learn some pretty interesting new facts about the money connections between Clinton and Obama and those SuperDelegates. Here are a few of their findings:

Elected officials who are SuperDelegates have received at least $890,000 from Obama and Clinton in campaign contributions over the last three years. Obama has given more than $694,000 to SuperDelegates from his political action committee, Hope Fund, or campaign committee since 2005. Of the 81 elected officials who had announced as of Feb. 12 that their SuperDelegate votes would go to Obama, 34 of them(40 percent) got money from from him in the 2006 or 2008 election cycles.

Clinton's PAC, HILLPAC, and campaign committee appear to have distributed $195,500 to SuperDelegates. Only 12 percent of her elected SuperDelegates -- 13 total -- have said they will back her.