How were special interests and influencers involved in last week’s convention in Philadelphia? What makes a superdelegate so super? Does it mean being a registered lobbyist? These are some of the questions we asked last week, just as public attention shifted from the hoopla of the convention over to the upcoming general election.

Superdelegates are often described as being un-elected delegates who are given a vote at the convention based on being part of the Democratic party leadership. We discovered that of the 712 superdelegates1 in Philadelphia, more than 60 are lobbyists, and about 30 work as “shadow influencers,” who perform the many of the same duties as lobbyists — only without registering as one.

Our reporting looked more closely at those lobbyist superdelegates to discover the kinds of influence and power they wield.

Influence at the DNC 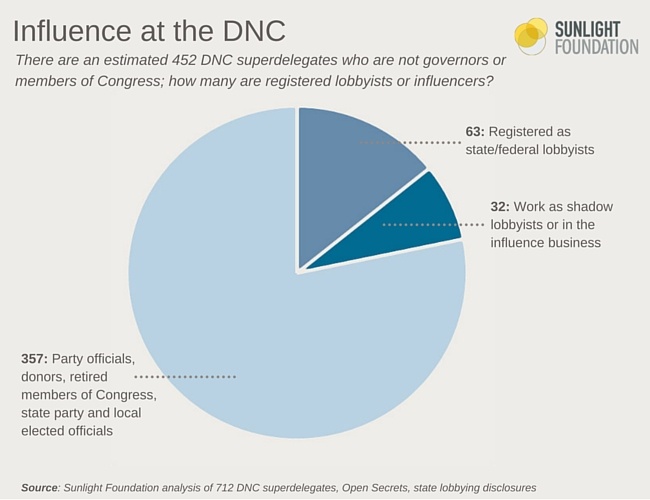 Read our deep dive into Democratic superdelegates who are either registered lobbyists or work as shadow influencers.

Our first step was to secure a list of all 712 superdelegates and their states. (Thank you to Alvin Chang of Vox for supplying us with one!) Step two — the one that took up the vast majority of our time — was to then see if any of those names were registered as lobbyists. Checking whether someone is registered as a lobbyist in this country should be easy, right? After all, most federal and state laws require that lobbyists register at least once a year. And these rules result in a measure of transparency: Bills like the Honest Leadership and Open Government Act of 2007 require federal lobbyists to file quarterly disclosures, and thanks to OpenSecrets.org, the federal lobbyists were relatively easy to spot.

But at the state level, despite some stringent rules that mandate disclosure, the task of identifying lobbyists can be much more of a challenge.

Some states made the search process easy: Delaware, for instance, had a simple search bar, allowing us to input each Delaware superdelegate until a name popped up. Out of six superdelegates, three are registered as lobbyists. Fifty percent! Thanks, Delaware.

Yet other states, like New Hampshire, split up its lobbying list into four quarters for each year, and then further split each quarter into 14 different files, sorted into awkwardly named subsets; categorizations like “Ba-Bi” and “Bl-Bu” make a direct search impossible.

After the labyrinth of New Hampshire, we especially appreciated the efforts of states such as North Carolina for having archives on lobbyists that date back to around the advent of state government websites, going as far back as 1991.

It was troubling to see that some states do not provide documentation on past lobbyist registrations as well. Nevada and North Dakota only make short-term lobbyist registration records available, dating back to just 2011 and 2012. To see where your state stands when it comes to lobbying disclosure, check out our full report card here.

What we discovered in our superdelegate research is that lobbying disclosure (and access to this data) can vary wildly from state to state, making the already difficult process of tracking influence in America even more arduous.

1 There are generally 716 superdelegates. However, this year two are vacant, and the eight delegates from Democrats Abroad get 1/2 vote each, leaving 712 total votes. (Back to top)