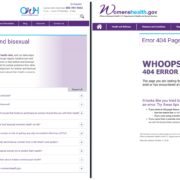 The “Lesbian and bisexual health” page is no longer linked from anywhere on the Office of Women’s Health website and the... View Article

As the Supreme Court weighs the issue of equal marriage rights, the political momentum -- and money --  appears to be lining up behind gay rights, an analysis of campaign finance reports for some key organizations involved in the debate indicate.

That balance was on display in front of the Supreme Court Wednesday as the justices considered a challenge to the Defense of Marriage Act. At least several hundred sign-wielding gay rights activists filled the sidewalk before the steps of the Supreme Court and only a handful of gay ...

CHARLOTTE, N.C. -- After a rousing convention speech Tuesday night that, among other things, commended LGBT Americans for their courage to marry, Michelle Obama spent about an hour Wednesday at a downtown Charlotte Marriott courting well-heeled gay donors.

That may be important, as a recent analysis showed that one in six bundlers for President Obama are gay. Another report identified 33 gay bundlers ...