As the Supreme Court weighs the issue of equal marriage rights, the political momentum — and money —  appears to be lining up behind gay rights, an analysis of campaign finance reports for some key organizations involved in the debate indicate. 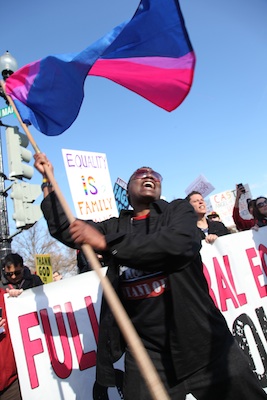 That balance was on display in front of the Supreme Court Wednesday as the justices considered a challenge to the Defense of Marriage Act. At least several hundred sign-wielding gay rights activists filled the sidewalk before the steps of the Supreme Court and only a handful of gay marriage opponents were present.

Exhibit A was a full-page ad that appeared in the front section of the Washington Post on Wednesday morning, as the justices prepared to hear a second day of arguments on whether states and the federal government should grant equal rights to same-sex couples. Placed by the Respect for Marriage Coalition, the ad listed dozens of major corporations that are calling on the Supreme Court to strike down the Defense of Marriage Act, which defines marriage as being between a man and a woman. The companies listed run the ideological gamut from tech companies like Apple, whose Democratic tilt is clear from contribution records compiled by Sunlight's Influence Explorer to Marriott International, whose employees heavily favor Republican candidates. The Respect for Marriage Coalition also has produced a television ad, seen above.

Among the organizations most closely identified with the gay marriage debate, the groups in favor of expanding the definition of marriage appear to have the bigger influence footprint. Since the late 1980s, pro-gay rights Human Rights Campaign has generated more than $18 million in campaign contributions and spent more than $21 million lobbying Congress. That compares to $4.3 million in campaign contributions and $112,000 in lobbying expenditures by the National Organization for Marriage, the leading organization on the opposing side of the debate.

Alongside HRC staffers, two of the other groups spending the most lobbying Washington for gay marriage were also leading the rally at the high court Wednesday. They are the Leadership Conference on Civil Rights, which has spent 8.8 million on lobbying, and the National Gay and Lesbian Task Force, which has dropped $1.5 million, including almost $500,000 last year. Ellen Buchman, the vice president of field operations at the Leadership Conference, also said that there were 10,000 people rallying for their cause across the country on Wednesday. 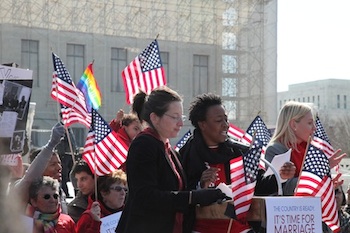 The search of the term "LGBT" turns up 25 matches for organizations that have used the term in their lobbying disclosures filed with the House and Senate offices. Most are supporters of gay rights. The list includes experienced lobbying organizations  American Civil Liberties Union and Amnesty International.

Among organizations that have listed "marriage" as one of their lobbying issues, according to records compiled by the Center for Responsive Politics, the Christian Coalition appears to have the highest influence profile of those opposed to gay marriage, with $265,000 in campaign contributions and $17.2 million in lobbying. But the Coalition's agenda is far broader than just the marriage issue, so it's hard to determine how much of that clout has been dedicated to it.

And gay rights groups appear to have equally as much support from organizations with broader civil rights agendas: For instance, People for the American Way, responsible for nearly $2 million in campaign contributions, made its top two recipients in the 2012 election cycle gay rights trailblazers: Tammy Baldwin, a Wisconsin Democrat, the Senate's first openly lesbian member, and Kyrsten Sinema, an Arizona Democrat who became the first openly bisexual person elected to the House last fall.

The publicly available figures may underestimate the influence of the opposition to gay marriage because much of it is centered around religious organizations which, because of their tax status, are not permitted to politic openly. But their social influence can be considerable. Among the organizations filing a friend of the court brief against gay marriage is the U.S. Conference of Catholic Bishops. Another organization that has been involved in past fights: the Church of Latter-Day Saints, which supported Proposition 8, the gay marriage ban that the Supreme Court heard argued Tuesday, according to the Los Angeles Times.

The 2008 referendum on Prop. 8 election solicited ample contributions from both sides of the issue but the money race remained tight. Those opposing the gay marriage ban raised $44 million. Those supporting the ban raised $39 million. Both groups having substancial support from out of state, an LA Times analysis showed.

One thing is clear: No matter what the Supreme Court decides, the money is there to continue the fight in Congress and before state legislatures for years to come.