Sen. Blanche Lincoln has put herself front and center in opposing efforts by her party’s leadership to pass or implement comprehensive caps on carbon emissions in the United States. She opposes the proposed cap and trade legislation that passed the House of Representatives and has been touted by President Barack Obama and senators John Kerry, Lindsay Graham and Joe Lieberman. Similarly, she has signed on to legislation that would block the Environmental Protection Agency (EPA) from implementing their own regulations to cap carbon emissions should cap and trade legislation fail to pass Congress. In this effort she is aided by a coterie of former staffers who currently lobby for a variety of interests seeking to weaken or derail carbon capping whether through legislation or the EPA’s rule-making authority. 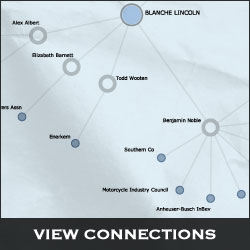 Six of Lincoln’s former staffers currently lobby for interests invested in influencing carbon capping legislation. These interests include oil & gas trade groups, agriculutural companies, the airplane industry and biofuel and bioenergy firms. As chair of the Senate Committee on Agriculture, Lincoln holds a powerful position to influence carbon capping legislation and she has made no secret of her desire to block the legislation.

(For a full visualization of Sen. Blanche Lincoln’s former staffers lobbying for the energy and climate industries click here or the image to the right.)

The most influential of Lincoln’s former staffers is Kelly Bingel, a lobbyist for Mehlman Vogel Castagnetti. Bingel is a former chief of staff to Lincoln and has been called “Sen. Lincoln’s alter ego.” Bingel’s clients include two incredibly powerful organizations opposed to carbon capping: the American Petroleum Institute (API), the lead trade group for the oil industry, and Koch Industries, one of the largest oil manufacturing, trading and investment companies in the country. David Koch, one of the two owners of Koch Industries, is a big contributor to conservative movement organizations and is an outspoken opponent of cap and trade legislation. Koch has invested millions in various conservative organizations that have led lobbying and grassroots stimulation efforts to get people to advocate to their lawmakers to oppose cap and trade legislation. API spent $7.32 million on lobbying last year, almost double what it spent in 2008. API states that any carbon capping legislation or regulations will cost the industry jobs and increase taxes.

According to the Center for Responsive Politics, Lincoln is currently the number one recipient of campaign contributions from the oil and gas industry from 2005 to 2010. She has received, through her campaign committee and her leadership political action committee (PAC),$309,500 from the industry.

Another former staffer to Lincoln, Ben Noble, lobbies for organizations opposed to carbon capping efforts including a variety of agricultural interests. Agricultural companies and trade groups have a major stake in cap and trade legislation as it moves through Congress. According to the EPA, agriculture accounts for 6 percent of all U.S. greenhouse gas emissions. The industry is seeking to avoid carbon capping regulation in cap and trade legislation or through EPA regulation.

One of Noble’s clients, the USA Rice Federation, opposes cap and trade legislation and recently praised Lincoln for her stance against the legislation, “We applaud Chairman Lincoln for putting the American economy and jobs first in this debate. While there are a number of questions surrounding the issue of climate change, there is absolutely no question about the severe impact that pending legislation and regulation would have on our economy and jobs.”

Lincoln is the top recipient of campaign contributions from a variety of agricultural industries including agricultural services, crop producers, food processors and meat processors and plants. Since 2005, Lincoln has received $789,372 from the agribusiness sector.

Both Bingel and Noble also represent organizations generally supportive of cap and trade legislation, so long as it contains language that allows them to maximize their profits under the new system. Bingel represents the electrical utility trade group the Electric Edison Institute (EEI). EEI, which includes members who have received specific benefits in the House-passed cap and trade legislation, sees the legislation as an openning into new markets with high potential to increase their share of energy distribution.

Noble represents the massive bio-tech, agribusiness firm Monsanto. Monsanto seeks to gain profits from a cap and trade system by getting farms and agribusiness to switch to a “no-till” method of farming. The “no-till” method would require farmers to purchase herbicides and seeds made by Monsanto. The lobbying effort by Monsanto is detailed in Tom Philpott’s explanation at Grist.

Last week, Lincoln released her first campaign advertisement in the uphill battle to retain her Senate seat. The ad touts her continued opposition to the passage of cap and trade legislation. This continues her statement from last year that cap and trade is a “complete non-starter.”

(Revision: Todd Wooten no longer lobbies for Enerkem. He is currently employed by Duke University.)