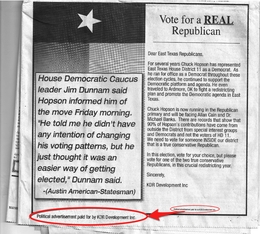 The Tribune explains the advertisement:

The ads in the Jacksonville Daily Progress, the Tyler Morning Telegram and the Panola Watchman took issue with the Republican bona fides of state Rep. Chuck Hopson of Jacksonville, a Democratic incumbent who jumped to the GOP in November and ran in a three-way race in the Republican primary this month. He got 61 percent of the vote, easily besting Michael Banks and Allan Cain.

The newspaper ads ran in Jacksonville and Tyler on the Sunday before the election and a week earlier in Panola, and they urged voters to choose anyone but Hopson. They were paid for by KDR Development Inc., a real estate company whose president, Republican Larry Durrett, lost to Hopson in 2006, when Hopson was still a Democrat. Durrett is also the president of Southern Multifoods, a Jacksonville-based company with dozens of franchised Taco Bell, KFC, Pizza Hut, A&W and Long John Silvers restaurants. The two companies are closely related, sharing addresses, officers and directors.

To see the Sunlight Foundation’s recommendations on how to make political activity allowed under Citizens United transparent go here.