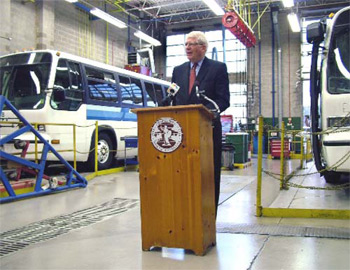 In 2005, Rep. David Price, D-N.C., earmarked more than $19.6 million to launch a light rail project in his district—one that he had promised to continue his “strong support for” by finding additional federal funding though his position on the House Appropriations Committee.

The light rail project was authorized by SAFETEA-LU, a law enacted in 2005 that was notable for the billions in earmarks it funded—including questionable projects like the “bridges to nowhere” in Alaska and the Prairie Parkway in Illinois.

Yet the light rail project Price sought funding for was never built. In fact, dozens of projects for which funds were earmarked were never started. While the final number of unspent transit earmarks under SAFETEA-LU has yet to be determined (we are awaiting a response to a pending Freedom of Information Act request with the Federal Transit Authority for the latest data — more here), the Sunlight Foundation Reporting Group uncovered a few of these unspent projects using other data we requested from the Agency.

North Carolina’s Research Triangle is located in the heart of North Carolina, which lies in Price’s district. Its name comes from the large number of high tech firms and research universities in the region, and it’s also home to explosive population growth, which has led to, among other things, traffic snarls and congestion. U.S. Census estimates show that the Raleigh-Durham-Cary region grew 32 percent from 2000-2009, making it the fourth fastest growing metropolitan area in the country. One solution to the heavily congested corridor between the state’s capital of Raleigh and the city of Durham, was constructing light rail. With help from a $19.6 million earmark secured by Price that became a reality – at least back in 2005.

SAFETEA-LU, the massive transportation act that authorized hundreds of billions of dollars of spending on transportation projects, included $6.6 billion in funding for more than 330 projects across the country that qualified as “New Starts” projects, which included light rail, commuter rail, rapid rail and bus rapid transit projects among others.

Price lauded SAFETEA-LU’s coming benefits in a press release after the House passed the bill in 2005: “I’m pleased that so many Triangle constituents will directly benefit from the funding,” he was quoted in the release as saying. “This is an important step forward in our efforts to meet the transportation needs of our rapidly-expanding communities.”

But just a year into the Triangle Transit Authority project, Bush Administration changes to the way that New Starts projects were evaluated put brakes on the project. According to the FTA, even before SAFETEA-LU was signed into law, the Bush Administration declared that it would limit New Starts funding recommendations to projects that scored a “medium” or higher rating for cost-effectiveness.

Officials at Triangle Transit, who had been planning the project for years, were hopeful that it would still move forward. But by 2006, it became increasingly clear that the stronger emphasis placed on cost-effectiveness over other factors such as improved mobility or environmental benefits would win out. They just missed the “medium” benchmark, scoring only a “medium-low” based on the new criteria.

As a result, the project was withdrawn and never approved by the FTA. Traffic still backs up for miles on I-40 between Raleigh and Durham, and the $19.6 million in earmarks set aside for this project expired in 2008 and sits in FTA ledgers unspent.

“The past administration’s actions to continually change the rules affecting criteria were damaging to the Triangle region,” said the Authority’s General Manager David King last month. “The changes reduced a project’s costs and benefits to a single, crude measure.”

Rep. Price’s spokesperson did not return our calls for comment.

Seven hundred miles away in Detroit, similar problems dogged planners at the Southeast Michigan Council of Governments – a group of local governments who received a $4.9 million New Starts earmark in 2006 to start work on a commuter rail between Ann Arbor and Detroit.

SEMCOG finally got funding thanks to Michigan Sens. Carl Levin and Debbie Stabenow, and was just starting the initial planning for their New Starts project when they were told that the criteria for funding had shifted to cost-effectiveness, essentially killing their project.

Their funding had been tied to the successful completion of an “alternative analysis” which the FTA uses to evaluate New Starts corridors. Under alternative analysis, the community is informed of the benefits, costs and impacts of a proposed project and local and regional leaders must sign off on the plan before the project can become part of the region’s long-range transportation plan. It was in this phase of the project that SEMCOG learned of the Bush Administration changes.

“The [money] was tied to the successful completion of an alternatives analysis, which we didn’t rate high enough. When we got into the analysis game, [the rules] changed at least twice… and we weren’t able to finish,” said Carmine Palombo, the director of transportation planning for the Council. Their earmark was never spent and expired in 2008.

“It’s very difficult for a true New Starts project to compete with all these started projects. It’s just not fair.”

While the project isn’t going forward as a New Starts project, Palombo said that they did receive earmarked money in the last few years to develop a demonstration project for their proposal using transit money outside of New Starts. They hope to “jump back into the New Starts process at some point,” Palombo said.

Another new rail project by planners at the Southeastern Pennsylvania Transportation Authority faced a similar fate when their earmarked an initial $3.9 million for a rail project between Philadelphia and Reading, Pa., known as the Schuylkill Valley Metro, was quashed.

Since the funds were earmarked funds submitted by Rep. Jim Gerlach, R-Pa., and Sen. Arlen Specter, D-Pa., they could not be transferred for any other SEPTA project, said spokesperson Jerri Williams. That earmark also expired unspent in 2008.

Jeff Boothe, a partner at the law firm Holland and Knight in Washington, D.C., who lobbies for the New Starts Working Group—made up of 65 transit authorities and organizations—said that in addition to the policy shift, a number of New Starts projects were also cut off in 2007 because the then outgoing Republican-controlled Congress failed to pass a transportation appropriations bill in 2006, and the incoming Democratic-controlled Congress passed a continuing resolution with no earmarks in it. Without the earmarks, the Bush Administration was able to roll up any unspent money, and only award funds to projects that met their new criteria of cost-effectiveness.

“When the Bush Administration did this because Congress did not issue any earmarks in 2007, there were a lot of unhappy communities,” said Boothe. “There were only 7 or 8 recipients that got funding from unearmarked monies and a lot of cities who didn’t get things like routine bus replacement needs met saw a fair amount of unhappiness.”

“In the case of Triangle Transit,” which is a member of the New Starts Working Group, “it was in the final design phase and they had an expectation the project would go forward to construction, but the rules got changed on them,” Boothe said. “They were the only project that was that far along in the New Starts process that had to step out and address those changes in FTA policy. And consequently, the project was set back. They should have been able to go forward.”

In January 2010, the FTA announced a proposed dramatic shift away from the Bush Administration policy under President Obama’s directive. U.S. Transportation Secretary Ray LaHood announced new funding guidelines be based on livability issues such as economic development opportunities and environmental benefits, in addition to travel cost and time saved as the primary criteria.

Where the Bush Administration placed 50 percent of its decision on cost-effectiveness, the Obama proposal would only be 20 percent, Boothe said. Under the Bush Administration the decision was a simple pass-fail–if a project did not score a medium it would not go forward. The new plan calls for a medium-low project or a low rated cost-effectiveness to be offset with economic development and good land use decisions, Boothe said.

For Triangle Transit planners, there is hope that some form of New Starts mass transit will finally see the light of day. They are currently working on proposing new plans for a New Starts project in their region.