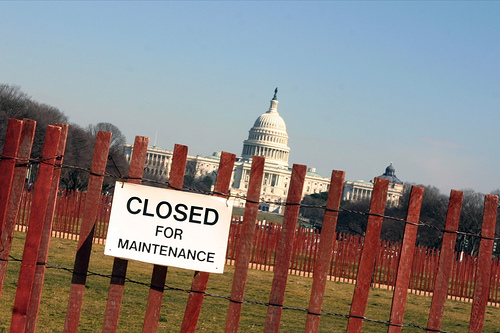 As Americans watch their lawmakers bicker and pontificate on how to fix the budget, we thought it would be helpful to gather some of the possible services that would slow or stall if the government shuts down. Of course, ‘shutdown’ isn’t a wholly accurate term, as many vital government services will continue to function and the United States will not become an anarchy overnight. As the final and frantic negotiations take place on the Hill, government offices are quietly prepping for the shutdown that would start after midnight this Friday. We will not know the specifics for this shutdown until each agency releases their individual updated plans, which the American Federation of Government Employees union is currently suing OMB to obtain.

The following examples are based on previous shutdowns and many services are up in the air, as many services can be labeled essential. Note these are examples are for federal services, not local or state government operations – though everyone will be hurting during a shutdown. Essentially, the determination still needs to be made over excepted activities and personnel. It looks like most congressional staff will report for work. Paychecks for salaried government employees will likely be delayed, even for those considered essential, and while the pay is not guaranteed, budgets passed following a shutdown traditionally provided backpay, though questions remain if that will happen now.

Members of the military and senior government officials like the President, members of Congress and presidential appointees will continue to be paid. Essential employees who are asked to ‘volunteer’ their services must fall under three categories (via OPM Furlough 2011 and Committee on House Administration):

Here’s a rundown of government services that could remain open or be crippled by congressional inaction. The main sources, if not linked, are the OMB Furlough Memos, which update the OMB Memo on November 17, 1981.

Experts estimate the looming shutdown could furlough around 800,000 federal employees. The Smithsonian says around 500,000 visitors will be turned away just over the weekend and who knows what will happen to the 23,000 people who already bought IMAX tickets. Like many political beings around the world, we are watching this situation very closely.