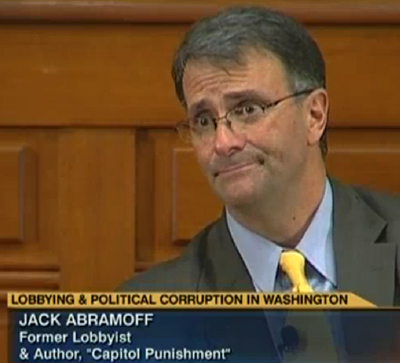 Jack Abramoff left Washington to serve his prison sentence as a primary perpetrator and beneficiary of its culture of corruption. While his fall from influence prompted many reforms that we were eager to see, there is still a system riddled with loopholes and lacking the transparency we desperately need. Now, he’s back. Shilling a book to pay off legal debts and line his pockets, Abramoff now wears the fresh cloak of a reformer who calls to clean the pigsty where he once rolled. We welcome him to the good fight, but honestly, it’s hard to believe he’s serious.

The master of rhetoric will be speaking at Public Citizen later today – we’ll be in the audience and watching online. He frequently boasts he had “100 congressmen in his pocket” yet he has not released the documents or named the names.

After my questioning him on this point, Abramoff responded “Having been to prison personally — hopefully, Ms. Miller hasn’t been to prison and most of your readers haven’t been and never will go — but having been to prison, it’s very hard for me to put anybody in harm’s way, even people I don’t like. And that’s besides the point anyway. The point is to change the system.” Just five days before his refusal to put anybody in harm’s way he told TPM “The only thing I’m doing is trying to make available what I know from my experience so that we can fix this.” Unfortunately we continue to see hollow rhetoric. Instead of waiting until your book stops giving milk, why don’t you spill some of those magic beans from the files you still have?

The Sunlight Foundation is committed to lobbying reform and exposure of the full system of influence. That’s why we have an outstanding FOIA to see who visited Abramoff in prison, hold public meetings discussing the issue and, of course, encourage public markup of our recommendations for lobbying reform.

Today’s event at Public Citizen is an opportunity for Abramoff to convince reformers that he’s really serious; helping to fix the system by revealing more substantive information about those who participated in his activities. I don’t care whether what he reveals is technically legal or not – decades of exposing K Street continues to prove that it’s not always what is illegal that is most troubling, but rather what is completely legal.

Unless Abramoff starts answering these tough questions and open up his treasure trove of information anyone who calls themselves a reformer should be very skeptical of this reformer road show.

Make Abramoff prove himself as a reformer rather than just calling himself one.