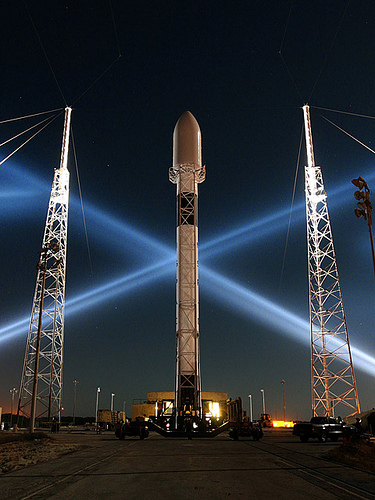 The private rocket that made history early this morning when it blasted the first commercially-launched payload for the international space station into orbit also was fuelled by a decade-long, multi-million-dollar political effort to pry funding from a sometimes skeptical Congress.

Since its inception in 2002, SpaceX, the company behind Tuesday's successful launch, has spent more than $4 million lobbying Congress and given more than $800,000 in political contributions, according to data compiled from Sunlight's Influence Explorer. Many of the company's campaign donations went  to key members of Congress in charge of the budget for NASA, which has mothballed the space shuttle in favor of commercial rockets for carrying payloads to the space station.

SpaceX's campaign to win political support has been systematic and sophisticated. Elon Musk, a founder of the wildly successful PayPal, does not surface as a political contributor in Influence Explorer records until 2002, the year he founded his commercial rocket company. Since then, he has donated nearly $725,000 to a politically disparate group of politicians. Last year, Musk gave the maximum legally allowed — $35,800 — to President Obama's reelection committee. But he also gave $15,000 to the National Republican Congressional Campaign Committee and $5,000 to Sen. Marco Rubio, R-Fla., a tea party hero who is much mentioned as a potential vice presidential nominee on the GOP ticket opposing Obama this year. In 2010, Musk gave identical amounts — $25,900 — to California Gov. Jerry Brown, a Democrat, and his unsuccessful Republican opponent, Meg Whitman.

Musk is the most active political giver among SpaceX's employees, who together have ponied up more than $842,000 for political campaigns. Recipients of the company's largesse include members of the congressional leadership, such as Senate Minority Leader Mitch McConnell, R-Ky., and Rep. Kevin McCarthy, R-Calif., as well as members of key congressional panels, such as Rep. Chaka Fattah, D-Pa., the top-ranking Democrat on the House appropriations subcommittee that handles NASA funding, and Sen. Barbara Mikulski, D-Md., chairman of the counterpart subcommittee in the Senate. Other recipients include Sen. Maria Cantwell, D-Wash., chair of another key Senate subcommittee, and Rep. Dana Rohrbacher, R-Calif., an outspoken advocate for commercial space flight.

Unlike many high-tech startups, SpaceX — short for Space Exploration Technologies — has maintained a significant lobbying presence in Washington almost since Day 1, records downloaded from Influence Explorer indicate. Since 2003, the company has spent more than $4.1 million on lobbying, an amount that steadily increased from $36,000 the first year to more than $1 million in 2010. SpaceX has used its own lobbyists as well as a series of outside firms. Late last year, it signed on one of K Street's titans, Patton, Boggs. According to filings with the Senate Office of Public Records, the team of Patton Boggs lobbyists representing SpaceX include two wily and popular former lawmakers, Trent Lott, a Mississippi Republican who served as his party's Senate leader, and John Breaux, a Lousiana Democrat who served on the Senate's Commerce, Science and Transportation Committee.

The hand-holding may have been vital to the company's success: According to an article published last week in The Space Review, Congress this year provided significantly less money for the commercial space program than the Obama administration requested, and some lawmakers fretted that it would turn into another Solyndra.