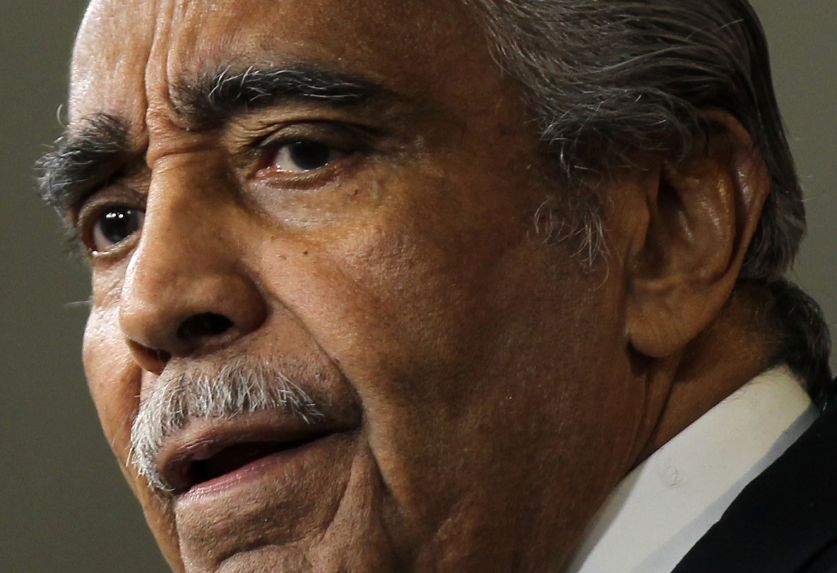 It has the potential to be a primary that makes history.

The seat at stake, in New York's 13th Congressional District, has been a place where black politicians have flourished — the place where Adam Clayton Powell, Jr. became the Empire State's first African American elected to Congress. It's one of two races taking place today where entrenched incumbents are facing challengers fuelled by outside money. In the other, veteran Sen. Orrin Hatch, R-Utah, now seems comfortably ahead despite considerable outside spending on behalf of his challenger, former state Sen. Dan Liljenquist.

In New York, however, incumbent Rep. Charles Rangel, is facing what may be his toughest race since he was first elected, 42 years ago. A well-known and influential Democrat who succeeded Powell in the Harlem-based seat, the 82-year-old Korean War hero became the first African American chairman of the Ways and Means Commitee and was a founding member for the Congressional Black Caucus. He has routinely been reelected by overwhelming margins.

But the times and the district lines are changing: While the Hispanic population in Rangel's old district was about 44 percent, new district lines drawn to comply with 2010 Census numbers stretch his territory into the Bronx and make voting-age Hispanics a majority.

Not so coincidentally, Rangel is being challenged by New York state Sen. Adriano Espaillat, who, if elected, would be the first Dominican-American in Congress. Some think that Espaillat may pose a serious threat to the powerful incumbent in a now largely Dominican district despite Rangel's seniority and the clout that it brings.

Among those is Mitchell Moss, a professor at New York University and an expert on local politics. He noted that Espaillat is running a very aggressive campaign and has support from leading Latino politicians.

"He's held office and is well known. He has a strong base. The question is who will come out to vote," Moss said of the state senator.

In marked contrast, Rangel faces the possibility of having the African American vote diluted by the presence of two lesser-known black candidates in the race. And the nation's best-known African American politician, President Obama, has been conspicuously silent in a race that involves a politician whose historic stature has been diminished by age, his party's losses and his own ethical lapses.

Along with Rangel's age and health issues (the incumbent suffered from a spinal viral infection which imparied his ability to walk without aid), some think his censure following his conviction for 12 ethics violations could hamper his chances at reelection. Moss, however, thinks that  "whatever happened in Washington" is less a threat to Rangel than the district's changing demographics.

Several factors could work in the incumbent's favor:

But as of Monday, Sunlight's Follow the Unlimited Money shows Campaign for Primary Accountability spending a little more than $12,000 to defeat Rangel.

Recent funding problems appear to be putting a crimp in Campaign for Primary Accountability's ambitions. Though the group has so far received contributions of over $3 million and spent almost $2 million, the latest June monthly Federal Election Committee filings show that the group had only about $228,000 left on hand and collected just $127,000 in contributions during May. To top things off, the Campaign for Primary Accountability is $390,000 in debt. At the end of January, by contrast, it reported more than $1.3 million in cash on hand and no debts.

The super PAC's biggest donor, Leo Linbeck told The Washington Post that the group is uncertain about its ability to make an impact on the NY-13 race.

Another group that is putting money into Rangel's race, Campaign for Our Future, doesn't have the same fundraising resources that Campaign for Primary Accountability has. Campaign for Our Future has spent $116,000 trying to defeat Rangel, more than twice what the group reported collecting in its latest filing with the FEC, according to Follow the Unlimited Money.

Of the $116,000, the group spent $61,000 opposing Rangel and the remaining $55,000 supporting another one of Rangel's younger opponents, Clyde Williams Jr. A former Democratic National Commitee political director with ties to President Barack Obama and  former President Bill Clinton, Williams won the endorsement of The New York Times.

Espaillat and Williams aren't the only one being backed by super PACs. Within the last week, the New York League of Conservation Voters has popped up on Follow the Unlimited Money putting a little more than $21,000 on the tables in support of Rangel.

Among the candidates in the race, Rangel is the clear fundraising leader, with more than $1 million in contributions.  Williams is No. 2 with $362,000 in contributions, compared to $334,000 for Espaillat, according to data from Center for Responsive Politics.

But Moss doesn't think money will influence the outcome of the race as much as local institutions, such as the Riverdale Review, a local weekly paper that endorsed Espaillat.

"This [race] is going to be defined by local, not national, forces," he said.

Moss sees the race as a very close one, and a very hard one for Rangel. Although he doesn't think Williams has a chance of winning, despite his impressive fundraising, Moss said the younger African American candidate will poses a serious threat to Rangel because he takes away would-be Rangel voters. Even if Rangel manages to pull out a victory, Moss sees the end of an era.

"Even if he wins, this will be his last term. Whoever wins the primaries is going to win the election because there are no Republicans running for the district but it's going to be very hard," Moss said. "If Rangel wins, Espaillat is probably still going to be the favorite next time."