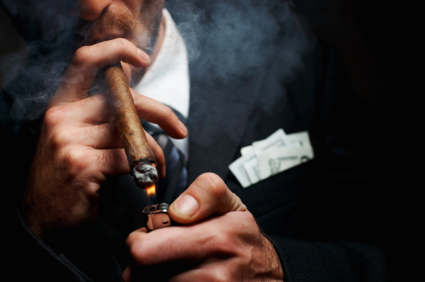 They rode into office on a wave of disgust with Washington insiders whom the public perceived as catering to special interests. Yet among the roughly two dozen bills that congressional freshmen have rallied to support is one that would benefit an icon of political cronyism.

The Traditional Cigar Manufacturing and Small Business Jobs Preservation Act of 2011, introduced by Rep. Bill Posey, R-Fla., would prevent the Food and Drug Administration (FDA) from regulating the stogies smoked by the likes of disgraced former Rep. Tom DeLay, R-Texas, and featured as a draw at many a political fundraiser. Fully three-quarters of the 89 first termers in the 112th Congress signed on as cosponsors.

Rallying together to keep government out of cigar smoking ranks high among the freshmen's priorities as measured by their cosponsorship of bills, one of the more surprising findings of a Sunlight analysis, part of our examination of the records compiled by this year's big class of congressional freshmen.

The list of 27 bills cosponsored by at least 75 percent of this year's freshman class shows that its Republican members (all but nine of the 89 House members sworn in for the first time in January) have been most united in their quest to dismantle President Barack Obama's health care reform law — a goal shared unanimously by members of their party. Rather than standing alone as renegades, they more often show their support for bills that also have the wide endorsement by others in Congress. On all but non-controversial legislation they have been followers, rather than leaders. See below for an embeddable chart of bills sponsored by at least 75 of this year's House freshmen.

Just one bill sponsored by a freshman and supported by the three out of four members of the freshmen class has actually made it into law. That would be H.R. 886, sponsored by Arkansas' Rep. Steve Womack, a Republican, which would "require the Secretary of the Treasury to mint coins in commemoration of the 225th anniversary of the establishment of the Nation's first Federal law enforcement agency, the United States Marshals Service." That bill, which had the support of 69 freshmen, including three Democrats, was cosponsored by 301 House members, and was approved by a vote of 409 to 2 — about as close to congressional harmony as that august body can get. The only other bill sponsored by a freshman that also got wide support from his class was another bill dealing with commemorative coins–this one football–offered by Rep. Jim Renacci, R-Ohio.

Seven of the bills attracting the most freshmen cosponsors involve repealing pieces of Obama's health care plan, which has been a major focus of Republican attack and a major theme for GOP-leaning super PACs and other outside spenders leading into the election. Interestingly, while repeal of the Dodd-Frank financial reform bill has also been a major applause line in Republican circles, none of the bills aimed at overturning the law has gotten the support of three-fourths or more of the Republican class.

The only health care rollback that has become law is H.R. 4. It repealed a part of the health care reform law that required businesses to report any payments of more than $600 to a vendor to the Internal Revenue Service (IRS) on forms known as 1099s. Designed to discourage tax evasion and to help raise revenues to fund programs under the new law, the provision was pilloried by small business groups as expensive and labor intensive. The bill, sponsored by Rep. Dan Lungren, R-Calif., was cosponsored by nearly two-thirds of the House, including 82 freshmen, three of them Democrats. It was among the first dozen laws passed by the new Congress.

Another bill, H.R. 436, would repeal the medical device tax, another revenue raiser that would bring an estimated $29 billion over ten years.  Sponsored by Republican Rep. Erick Paulsen of Minnesota, who has received more medical device campaign cash this election cycle than any other House member, the repeal is cosponsored by 240 House members, including 80 freshmen, all Republicans. While the House voted in favor of the bill in June, the bill is not expected to go anywhere in the Senate.

Of the other health care-related bills, H.R. 452 would repeal the Independent Payment Advisory Board, which Republicans charge would ration Medicare services and the health industry fears would lower their profits, passed the house last March as part of a larger GOP onslaught against the health care reform law. Seventy-seven GOP freshmen cosponsored that bill, among the 234 sponsors of the bill in the House. Seventy-seven freshmen also cosponsored H.R. 1744,  which would repeal the individual mandate in the health care reform law. The bill hasn't passed the House and, like the measure repealing the medical device tax, would be unlikely to get traction in the Senate.

HR. 1179, with 223 cosponsors, 73 of them GOP freshmen, would permit health care plans to refuse to provide abortion services; that bill was recently added to the appropriations bill for the Department of Health and Human Services. H.R. 1206, with 213 cosponsors, 71 of them Republican freshmen, has attracted lobbying by a host of insurance interests and would "provide a fix" for insurance agent commissions based on a particular government ratio calculation. And H.R. 1370 would repeal the annual fee that health providers must pay under the new law, another bill lobbied heavily by the insurance industry. That bill has 193 cosponsors, 69 of them Republicans from the freshmen class.

Finally, H.R. 3269, another health care-related bill, but one not specifically oriented toward the health care reform law, would prevent proposed cuts Medicare payments to radiologists. Seventy-two freshmen, three of them Democrats, signed on to the bill, which overall has 262 cosponsors. Doctors groups and manufacturers of diagnostic imaging devices have lobbied on the bill.

Of the remaining bills that enjoy cosponsorship by three-fourths or more of the freshmen class, two–H.R. 1905 and H. Res. 568–aim to thwart Iran's nuclear ambitions, and two more, both sponsored by Majority Leader Rep. Eric Cantor, R-Va., H. Res. 268 and H.R. 4133, have to do with Israel. All four were cosponsored by two-thirds of the House or more, Republicans and Democrats alike, and passed the House with very little opposition.

Other bills popular with the freshmen have themes resonant to the GOP base, which were broadly supported by House Republican lawmakers overall, in addition to the freshmen:

As for the cigar bill, it has drawn opposition from the American Lung Association, which recently cited a Centers for Disease Control study showing that cigar smoking is increasing.  "The U.S. Surgeon General and the National Cancer Institute have confirmed that cigar smoking is not safe and can cause chronic obstructive pulmonary disease (COPD), cancers of the oral cavity, larynx, esophagus and lung, as well as heart disease," said the group.