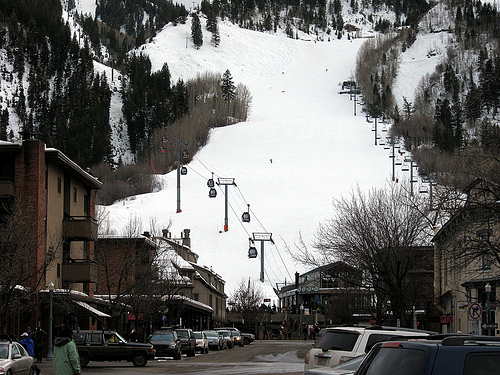 There’s a gold nugget in the middle of GOP freshman Rep. Scott Tipton’s Colorado congressional district, which sprawls across the western, largely rural, part of the state, and its name is Aspen.

Tipton, who two years ago upset three-term Blue Dog Democrat John Salazar — brother of Interior Secretary Ken Salazar — is getting direct help from GOP donors in the wealthy mountain town, as he is facing a notable challenge from Democrat Sal Pace, a state legislator, in a district that drew substantial sums of outside spending last time around. It is considered far more competitive than the race in Colorado's 4th Congressional District, in the eastern part of the famously purple state, the base of Colorado's other GOP freshman representative, Cory Gardner. Sunlight took a closer look at the race as part of our examination of the House freshmen.

There have been at least three fundraisers  for Tipton in Aspen since his election, and donors from that area have been the source of nearly $175,000 since 2009 for the congressman, who hails from the decidedly more downscale city of Cortez. Aspen and nearby Carbondale zip codes appear high on the congressman's top contributing zip codes list, despite the fact that Pitkin County swung heavily for his Democratic opponent last time around. Both House Speaker John Boehner, R-Ohio, and Majority Leader Eric Cantor, R-Va., have made the journey to appear at fundraisers at the homes of politically connected donors there, many of whom have a national profile. Among them:

Augmenting Tipton's Aspen donors are contributions from GOP establishment insiders elsewhere. Tipton has taken $11,975 from lobbyists, including contributions from Washington GOP lobbyist royalty Charles Black and his wife, Judy, who between them served in the Reagan and Bush Administration, have bundled contributions for recent GOP presidential campaigns, and who are frequent hosts of fundraisers in Washington.

Such donors provide political cachet in addition to cash; however, if the 2010 experience is any indication, the Tipton race will draw millions in spending by outside groups, conservative and liberal alike, that will outpace the money raised by the candidates directly. So far this year, the contest has attracted more than $78,000 in outside spending, most of it from groups trying to defeat the Republican incumbent.

In  2010, unions and Democratic leaning groups such as the AFL-CIO, the National Education Association and the American Federation of Teachers dropping $2.3 million into the race, mostly for negative ads against Tipton.

Meanwhile, the outside group spending the most to benefit Tipton was Americans for Job Security, which operated out of the same office as Crossroads GPS and ran attacks ads like this one against Salazar. Faith and Freedom Coalition, American Crossroads, and Americans United 4 Life were among the other conservative groups spending big in the race; overall, Tipton benefited from $1.5 million in outside spending.

So far, all the reported outside spending for the election district this cycle has entirely favored Pace, according to Sunlight's Follow the Unlimited Money tracker with $76,000 spent by the League of Conservation Voters and the SEIU, among other groups.

In addition, Public Campaign, a group that advocates for public funding of elections, has targeted Tipton for criticism as part of its series on "Big Oil and Congress" series, criticizing Tipton for voting for "wasteful oil subsidies" while taking campaign contributions from the oil industry.

Public Campaign also criticized the congressman for taking contributions from SG Interests, a Texas based firm that was seeking to drill in Gunnison County. According to a report in the Glenwood Springs Independent, local activists opposed to the drilling were upset to see TIpton had taken the money when he was attempting to mediate the dispute. A Tipton spokesman at the time responded that the congressman had received contributions also from Sue Anschutz-Rodgers, a Republican donor who sided with the activists in the dispute. SGI later agreed to settle a federal antitrust lawsuit that alleged it had worked with another energy company to fix bidding on public leases in the county, paying $550,000.

Tipton has focused largely on energy and agriculture issues. Hailing from a state that has seen devastating wild fires, has taken the lead on a "healthy forests management" bill that is endorsed by the timber industry, farm bureaus, and cattlemen's associations, among other pro-timber harvesting groups. If enacted, the legislation would give more authority to local governments to manage forests. Tipton has gotten $5,500 from Koch related interests, which owns the timber company Georgia Pacific. Charles and David Koch have been instrumental in funding organizations that support GOP politicians and causes. Tipton has also gotten $62,150 from livestock industries, a good chunk of the $137,150 he's gotten from agribusiness interests over all.

Pace has accused Tipton of "flip-flopping" on an amendment offered by Colorado Democrat Rep. Ed Perlmutter  this summer that would have given the federal government authority to contract with the states to remove beetle infested trees. Republicans called Perlmutter's amendment a "cheap political stunt," reported the Durango Herald at the time.

Tipton has also sponsored a bill, approved by the House in March, that would streamline the hydropower approval process, exempting small developers from the environmental review process, a bill that's garnered about two dozen Democratic votes.

He has also weighed in on matters such as nutrition for kids, joining Colorado Democrat Sen. Mark Udall in opposing new guidelines for serving potatoes in school lunches, and signing a letter protesting proposed voluntary guidelines for marketing food to children.

Not long after taking his oath of office, in March 2011, Tipton issued an apology to the House Ethics Committee after it came to light that his 22-year-old daughter had been using his name in emails to drum up clients for her employer, the Colorado-based Broadnet. The company, which puts together telephone town hall events, is run by his nephew, Steve Patterson.