For those of us who worry about influence in politics, we know pretty well that we are not working with a level playing field. Washington is a town where the majority of lobbyists work for corporations, and where the majority of campaign contributions come from representatives of those corporations and other very wealthy Americans. Elected officials hear from the rich more than the poor. And policy seems to reflect that.

But when it comes to quantifying the participatory balance, the new bible of data on the subject is out and in fine bookstores everywhere.  It is called The Unheavenly Chorus, and at 700 pages, it is as comprehensive as it gets. In just about every way one can imagine, it shows how participation in politics is tilted in favor of the upper class and corporations. Anybody who cares about participatory inequality will want a copy, and should refer to it early and often.

Of course, I’m biased, because on a personal level, this is the book that got me interested in big data, way before it was published. I was fortunate enough to work on it as a political science Ph.D. student at the University of California, Berkeley. One of the authors, Berkeley political science professor and now dean of the Goldman School of Public Policy, Henry E. Brady, was my dissertation advisor. The other two authors Kay Lehman Schlozman of Boston College and Sidney Verba of Harvard, also became trusted mentors.

So it was a great pleasure to see the authors over at Brookings last Wednesday to discuss talk about the book, and participatory inequality in general, and what (if anything) is to be done.

To cover the book in short form is no substitute for reading the thing, but it least gives a basic picture. And speaking of pictures, the book features an old New Yorker cartoon that’s pretty good at drawing a diagram. 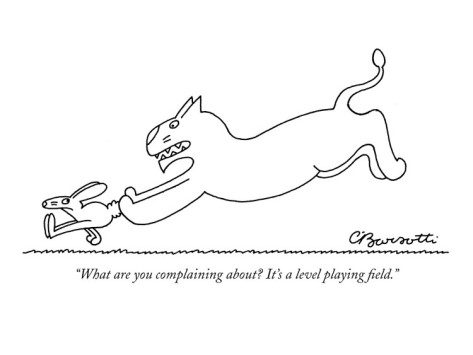 As a matter of background, The Unheavenly Chorus takes its name from a famous quote from the political scientist E. E. Schattschneider: “The flaw in the pluralist heaven is that the heavenly chorus sings with a strong upper-class accent.” The “pluralist heaven” referred a claim, made by some at the time (1960), that American democracy was in great shape because Madison’s dream of a vibrant pluralism in which faction regularly counteracted faction was alive and well. Schattschneider dissented, noticing that most of the participants were upper-class. The Unheavenly Chorus shows how right Schattschneider was.

As Professor Brady remarked at Wednesday’s Brookings talk: “When I became dean of the Goldman School of Public Policy, my development staff took me aside and they told me, “You know what? It’s people with money who give money.” Which I know sounds like a tautology, sort of, or at least sort of a fairly obvious truth, but it really, really is true. And it’s people with money who give money.”

Yes, rich folks are more likely to work on campaigns, attend political meetings, but where they really shine is in giving.  Since I do love charts, I’ll go ahead and present a few great ones from the book over the course of this post. Here’s one that looks at who gives and participates by SES (social-economic status) percentile.  The rich do more of everything. Especially give money. 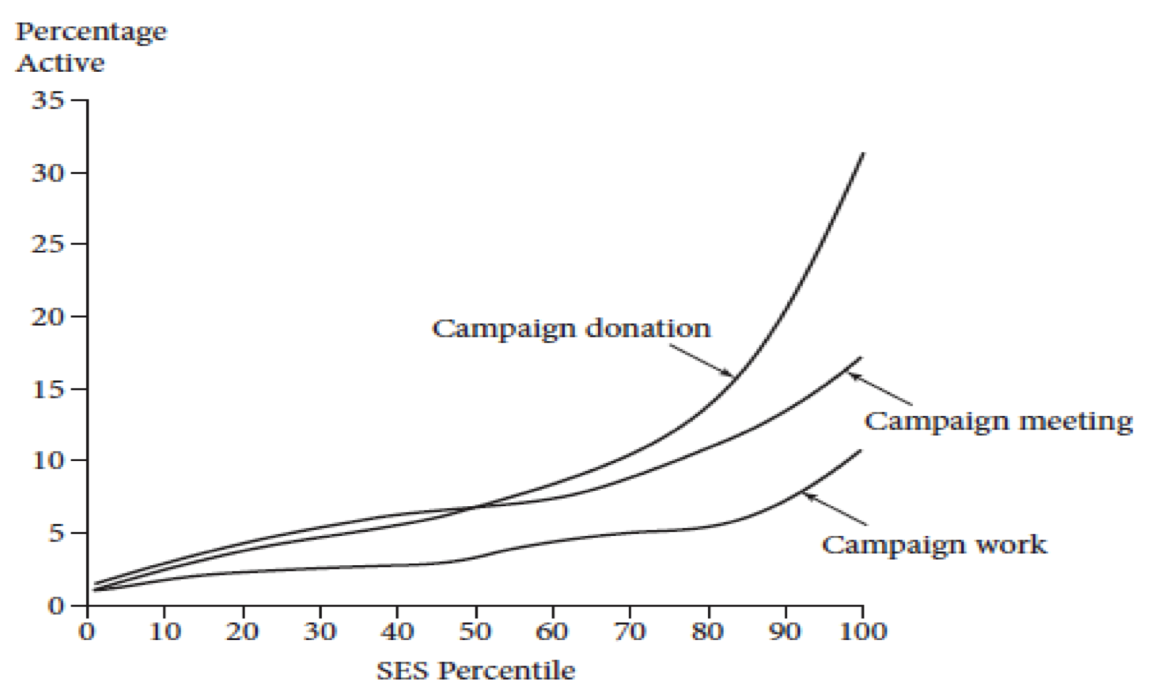 Also, as I’ve documented here at Sunlight, fewer than 30,000 Americans (1% of 1%) give a quarter of all campaign donations (work which The Unheavenly Chorus is kind enough to cite). But there’s much more in the book.

The rich are more civically engaged across all activities, and this is a pattern that has been remarkably consistent for 50 years, when Professor Verba began this work as a young man.

As Verba noted Wednesday, if you’re rich, you get a good education, a good job, and you hang around with other people who are politically engaged, which makes you more engaged. If you’re poor, you don’t, and you aren’t. Or, in his words: “Political inequality begins in the family where the education of children begins, goes through the school system where you get differential education… It’s involved in the process of marriage. It’s involved in the process of getting a job. It’s involved in the organizations you belong to. So the inequality, those upward slopes, are not something put on us by a political elite; they are something that grow out of the very country and nature of the institutions in which we live, which is one of the reasons why it is very difficult to change.”

But that’s just individuals. When it comes to organized interests, things are even more unbalanced. Below are a few more key figures from the book. By the numbers, business groups make up 53% of the organizations with lobbyists in Washington, hire 64% of the outside firms, and make 72% of the lobbying expenditures. They also give half of the PAC donations. 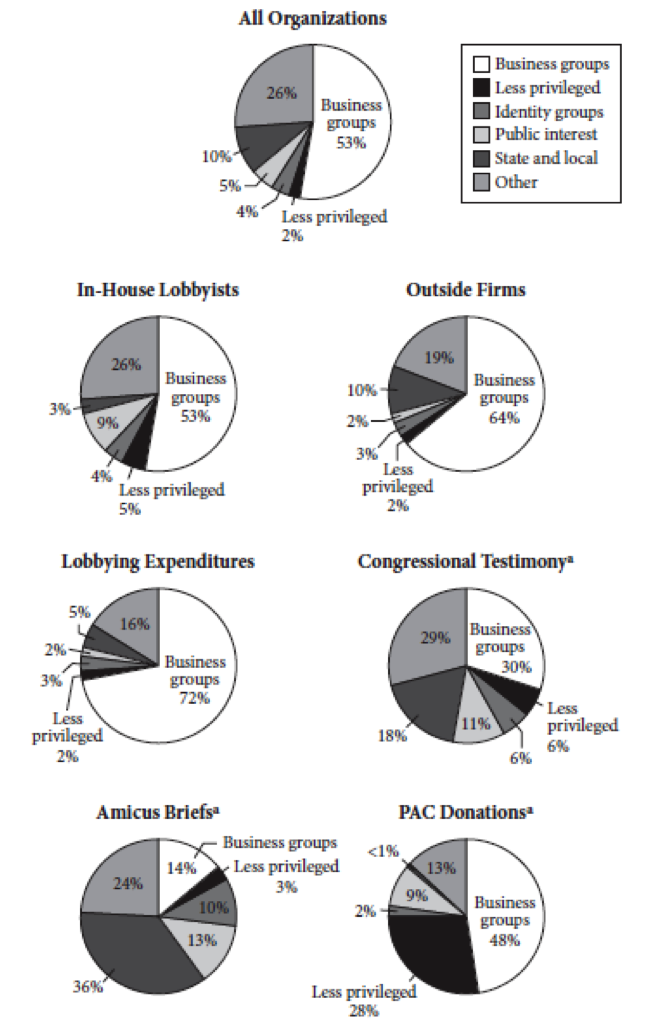 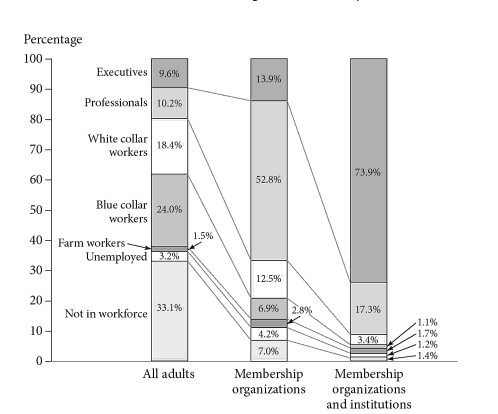 So “Who’s not there?” asked Schlozman on Wednesday. Her answer: “In this group of nearly 12,000, there are no organizations representing children in Head Start programs, Wal-Mart associates, people who are awaiting trial on a felony charge, women at home, and recipients of tested benefits, like SNAP, the EITC, or TANF, organized and working in their own behalf…No one who does unskilled work, who’s not in a labor union, has an organization representing him or her in Washington.”

There is an old Washington adage that both the authors and I are very fond of: “If you’re not at the table, you’re on the menu.” When business groups crowd the table and representatives of the less privileged are few and far between, it’s easy to see how the less privileged are going to wind up on the menu (i.e. seeing their programs cut), while the business groups and the rich get lower taxes and more freedom to operate as they see fit. Arguably, this basic principle explains much of what’s been happening in Washington for decades, especially as the amount of business lobbying has exploded.

What is to be done? Professor Verba used the word gloom several times on Wednesday. Washington does not seem in a hurry to undertake reform. The Supreme Court has made regulating campaign money virtually impossible. And change would require something big, given the persistence of these patterns for decades.

Or as Schlozman put it: “It seems that the political changes that are even remotely feasible would not make much difference, and the ones that might really ameliorate the circumstances that we’re talking about are very unlikely to materialize. In an age in which the Supreme Court has blown the lid off campaign finance regulation and the state legislatures are passing voter ID laws around the country, it’s very easy to be despairing about what can be done to level the playing field of American democracy.”

The authors are also somewhat pessimistic about the Internet as a transformative technology, because, as Brady put it: “If anything, online activity is more highly stratified than offline activity.” Based on surveys, poor folks are just as inactive online as offline – even when the sample is restricted to those with internet access.

Still, information is power, regardless of how gloomy. The Unheavenly Chorus is exhaustive in its scope and definitive in its depressing conclusion: “the inequalities of political voice we have documented so extensively threaten the democratic principle of equal responsiveness to all.”

Yet, as the book’s final sentence concludes: “To recognize the inequalities of political voice and, in Gerry’s words, to ‘encourage the diffident to enrich our stock of knowledge’ – that is, to listen more carefully to the accent of the unheavenly chorus and to take measures to include a more representative set of singers – would be a step toward delivering the promise of American democracy.”

So, then, here’s to the hope that this tome makes the case for addressing political inequality even more undeniable. In the meantime, we at Sunlight will continue to do what we can to highlight the inequalities, and doing our best to minimize them by leveling the playing field where we can.