This piece was prepared in collaboration with Ethan Phelps-Goodman.

If you think wealth is concentrated in the United States, just wait till you look at the data on campaign spending.

In the 2010 election cycle, 26,783 individuals (or slightly less than one in ten thousand Americans) each contributed more than $10,000 to federal political campaigns. Combined, these donors spent $774 million. That’s 24.3% of the total from individuals to politicians, parties, PACs, and independent expenditure groups. Together, they would fill only two-thirds of the 41,222 seats at Nationals Park the baseball field two miles from the U.S. Capitol. When it comes to politics, they are The One Percent of the One Percent.

The One Percent of the One Percent are not average Americans. Overwhelmingly, they are corporate executives, investors, lobbyists, and lawyers. A good number appear to be highly ideological. They give to multiple candidates and to parties and independent issue groups. They tend to cluster in a limited number of metropolitan zip codes, especially in New York, Washington, Chicago, and Los Angeles.

At the top of this elite group are individuals such as Bob Perry, CEO of Perry Homes, who gave $7.3 million to Karl Rove’s American Crossroads in 2010 and $4.4 million to Swift Vets and POWs for Truth in 2004, and Wayne Hughes, owner and chairman of Public Storage Inc., who gave $3.25 million to American Crossroads in 2010, and Fred Eshelman, CEO of Pharmaceutical Product Development who spent $3 million in 2010 on his own group, RightChange. Sunlight’s Ryan Sibley writes more about the top donors here.

Unlike the other 99.99% of Americans who do not make these contributions, these elite donors have unique access. In a world of increasingly expensive campaigns, The One Percent of the One Percent effectively play the role of political gatekeepers. Prospective candidates need to be able to tap into these networks if they want to be taken seriously. And party leaders on both sides are keenly aware that more than 80% of party committee money now comes from these elite donors.

Political scientists Wendy K. Tam Cho and James G. Gimpel have called these elite donor networks “campaign gold” after discovering just how much big contributors tend to flock together, making it easy for candidates to raise substantial sums of money at a single event.

We find that in the 2010 election cycle, 74 federally registered candidates relied on The One Percent of the One Percent for at least half of all of their itemized (over $200) contributions (of those running in that election, 25 won, and 15 lost – the other 34 were not up for election; mostly they were Senators preparing for a future campaign). Only in 2008 did more elected officials (109) rely on The One Percent of the One Percent for half of their itemized contributions. (Candidates and parties do not need to disclose to names of contributions under $200. In the 2010 election cycle, the average congressional campaign got 84% of its money from donations of $200 or more. See our methodology section for more details.)

Congressional candidates are also increasingly relying on contributions from people who do not live in their districts, according to research Professor Gimpel has conducted along with Frances Lee and Shanna Pearson-Merkowitz. In a paper entitled “The Check is in the Mail,” they find that candidates are increasingly calling on what the scholars call “political A.T.M.s” – the small number of zip codes that are home to the concentrated communities of high-spending donors.

What follows are more details about who The One Percent of the One Percent are, and their changing role in elections. (For more on how we define this population, please see our methodology section at the end.) 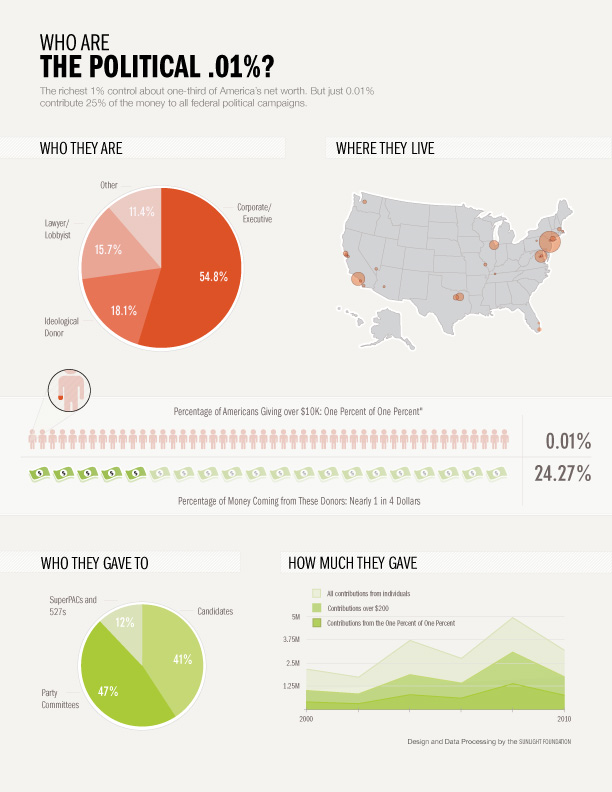 In examining the filings of The One Percent of the One Percent, three types of affiliations predominate: corporate, lawyer/lobbyist, and ideological. The three types of affiliations have also been remarkably consistent over time. Roughly 55% of these elite donors have been affiliated with companies, roughly 16% have been affiliated with law and lobbying firms, and roughly 18 % we classify as ideological. The remainder either does not list enough information for us to make a determination or do not fit into one of the three dominant categories. (For more details on how we sorted the donors into categories, please see our methodology section at the end)

Corporate affiliations are the most common. To the extent that donors listed occupations (many do not), the most common titles were variations on “President,” “CEO,” “Executive,” Chairman”, and “Investor.”

Of the 10 companies with the most representation in The One Percent of the One Percent in the 2010 election cycle six are financial companies. Goldman Sachs, with 92, far outpaces everyone else. Citigroup, with 32, is second.

In the 2010 election cycle, 18.1% of The One Percent of the One Percent we identified as ideological based on their giving patterns and affiliations. Of these donors, a handful of groups dominate – EMILY’s List (162), Club For Growth (70), and Act Blue (70).

Looking at the three different types of donors side by side for the 2010 election cycle, a few patterns emerge.

The ideological contributors on average spend the most (their median contribution level is $17,976). They also give the most money to independent expenditure groups (like American Crossroads) – 21.8%, much more than the other two types of donors. They give on average to 9.5 different candidates.

Even within the elite universe of The One Percent of the One Percent, some contributors are more high-powered than others. An elite cadre of 15 contributors each gave more than $500,000, and an almost-as-elite group of 252 gave between $100,001 and $500,000. These high-spending donors give their money primarily through independent expenditure groups, and tend to be more ideological.

In the last two decades, both the cost of campaigning and the size of campaign donor bases have increased. So has the number of individuals giving $10,000 or more in real 2010 dollars, the cut-off point to be included in The One Percent of the One Percent. (For purposes of comparability, we’ve kept the cut-off point stable over time. See our methodology section for more details)

Individuals can give up to $30,800 per year to party committees, making these elite donors especially valuable to Democratic and Republican officials. In 2010, party committees relied on The One Percent of the One Percent for 81.6% of all itemized contributions, the second-highest percentage since 1990, which is as far back as our data go.

As party committees raise more money, they are becoming more reliant on big donors. The last four cycles election mark four of the five cycles in which the parties have been most reliant on donors giving more than $10,000.

*We count only itemized (over $200) donations here, since the names of donors are not provided for contributions under $200. Contributions of $200 and up typically account for 80% of all campaign donations.

Table 11. Current House members most dependent on One Percent of One Percent money in the 2010 election cycle

Table 12. Current senators most dependent on One Percent of One Percent money in the 2010 election cycle

* Actually up for election the 2010 election cycle

But even within these metro areas, a small number of zip codes stand out.

These geographical patterns highlight that these The One Percent of the One Percent concentrate together in high-income areas. They are far from evenly distributed throughout the nation.

There are approximately 312 million people living in the United States. Yet just 26,783 (less than one in ten thousand) accounted for 24.3% of all political contributions in the 2010 election cycle.

Unlike the 99.99% of Americans who do not spend ten grand of their own money on an election cycle (mostly because they can’t afford to do so), The One Percent of the One Percent have unique access to candidates and party leaders. They know that candidates and parties need their money, and this presumably allows them to play a kind of gatekeeper role, allowing them to set the parameters of priorities of “legitimate” politics.

They congregate in a limited number of elite zip codes. Their concerns are not the concerns of ordinary Americans.

Some are motivated by ideological reasons. For others, the motivation is less partisan and more pragmatic: Many are lawyers and lobbyists, and even more are corporate executives, all seeking to influence legislation and policy.

Over time, more individuals are choosing to spend $10,000 or more on politics, and candidates and especially parties are becoming more reliant on them. With new vehicles for unlimited money in the 2012 election, a small number of individuals with both the means and the motive to spend lavishly on elections are poised to play an even greater role. To the extent that the priorities and interests of these elite donors are not representative of the country, there are good reasons to be concerned that their unique access is having a distorting impact on our politics.

All of the data used in this analysis originates from the Federal Election Commission. Information on the total amounts raised by candidates and committees comes from the FEC’s summary files, available here. Information on itemized contributions (contributions over $200) is published by the FEC and standardized by our partner organization, The Center for Responsive Politics. (CRP). CRP identifies unique donors and assigns organizational and ideological affiliations. Contributions under $200 are not required to be itemized, so our analysis cannot say anything about the characteristics of this group of donors, other than the total amount of money raised.