Crossroads GPS has now spent at least $108.8 million on political ads this cycle, including over $12 million dollars worth of ads so far in September. The Koch brothers-founded Americans for Prosperity has increased the pace of its spending, hitting a total of at least $65 million, with $32 million coming in the last six weeks. All of Americans for Prosperity’s expenditures have been directed at President Obama, whereas Crossroads GPS has aimed over two thirds of its spending at the President and most of what remains at Democratic Senate candidates. 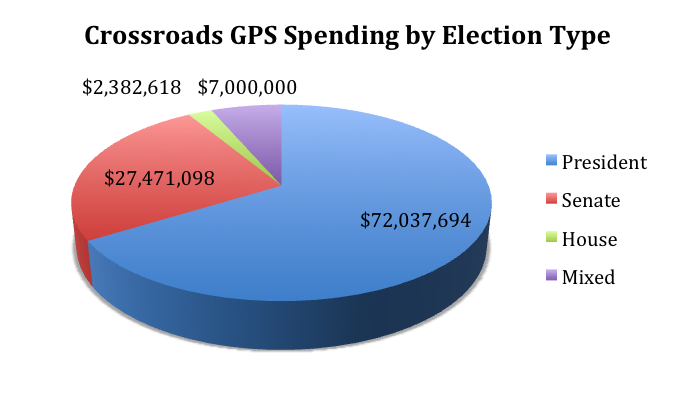 The combined total spending for just these two dark money groups ($174 million) approaches the total of all Super PAC spending, which comes in just shy of $242 million.

Despite the impressive volume, the altered nature of the ad spending by these 501(c)4 tax-exempt organizations is even more intriguing. Recent developments put to rest the speculation about how a shifting legal environment might have affected their ability to continue spending while keeping the identities of their donors a secret.

It is now clear that through a concerted shift to change the legal classification of their advertisements, Crossroads GPS and other similar groups have taken steps to continue to avoid disclosure.

As the graph above shows, Crossroads GPS switched entirely from issue ad spending to independent expenditure spending over the past few months.

This came as a result of a March decision from the US District Court for the District of Columbia (Van Hollen v. FEC). The court ruled that organizations airing issue advertisements close to the elections would have to disclose their donors. When the Federal Election Commission agreed to enforce this ruling, it became clear that dark money organizations, like Americans for Prosperity (AFP) and Crossroads GPS, would have to adapt.

As we have reported in the past, Crossroads GPS and Americans for Prosperity are responsible for over $100 million of so-called issue ads in this election cycle. Under the new legal framework resulting from Van Hollen v. FEC, issue ads that mention a Presidential candidate would begin to require donor disclosure on July 28th.  Ads that mention other federal candidates would begin to require such disclosure on August 7th.

Some in the campaign finance community predicted that instead of running issue ads after these dates, dark money groups would switch to funding independent expenditures – more explicitly political ads that include express advocacy (such as saying ‘support candidate x’ or ‘vote against candidate y’). Despite the fact that they are more blatantly intended to influence elections, independent expenditures only trigger required disclosure of the total spending, but no donor disclosure.

Given that donor anonymity is the defining advantage of these organizations and a critical piece of their fundraising strategy, it was certainly reasonable speculation.

So what happened when July 28th came around? It is safe to say that the predictions of a strategic shift were accurate.

As you can see from the graphs above, these organizations have gone from literally no independent expenditures since January of 2011 to dropping millions of dollars on them in July, August and September. This is not to say that these organizations have not been spending to influence the elections before July – they certainly have been – but the legal characterization of the spending has changed.

Spending on independent expenditures instead of issue ads allows these nonprofits to keep up the aggressive pace of their ad buys (now with ads that include express advocacy – a small but noteworthy advantage), while only disclosing the total amount of expenditures to the FEC. As for the production of the ads, as long as the ads include express advocacy for or against a candidate (e.g. this ad attacking Shelley Berkley), they are guaranteed to qualify as independent expenditures.

Last week, the decision in Van Hollen v. FEC was reversed and sent back to the D.C. court for reconsideration. However, during the fifty-three days where the decision was in effect, the American Future Fund spent $2.8 million, while the Chamber of Commerce, a 501(c)6 trade association, put in a pretty $12.7 million. Crossroads GPS spent almost $15 million in this period, but Americans for Prosperity took the cake with a whopping $30.8 million in independent expenditures.

This strategy, though certainly the most appealing option in the short term, does pose some dangers to these secretive nonprofits. Independent expenditures, by definition, include express advocacy for or against candidates for federal office. By spending on such explicitly political TV spots, these organizations give more credence to the argument that they are abusing their tax-exempt status as 501(c) organizations.

If the IRS, which has already begun an investigation into Crossroads GPS, decides that these organizations have crossed the line, they could not only be subject to the revoking of their tax status, but also fees on expenditures as high as 35%. These fees, if charged retroactively, could cost the organizations millions of dollars.

As if in an effort to maintain the constant flux in which our modern campaign finance system exists, on last Tuesday, the U.S. Court of Appeals in Washington made void the lower court’s decision, and sent the case back for reconsideration. Given that the DC District Court’s decision was overturned, further developments can be expected. Presumably, if the leadership at these organizations agrees that independent expenditures could threaten the benefits of their tax status, they may shift back to issue ads. Regardless of their decision, since in such proximity to the election issue ads qualify as electioneering communications, the next round of ad buys will be on the public record and might provide a little more insight into these secretive organizations.